Muscle cramps are the most common heat-related illness experienced by athletes (Cooper et al, Journal of Athletic Training, 2006, 41, 332-336). Muscle cramps also occur frequently at night (“night cramps”) and in the elderly. Because the cause of muscle cramps is unknown, our treatments for them are often times unsuccessful. In fact, less than 50% of athletic trainers felt they were very successful in treating muscle cramps (Stone et al, J Sport Rehab, 2003, 333-342).

My main task in this study was to perform the data collection by testing the subjects on 5 consecutive days, and then analyze the findings to determine what the most effective method is in inducing long-lasting, intense cramps. Although we would not be discovering how to most effectively treat cramps, we would be paving the way for further research to find treatments.

Twenty healthy, cramp-prone subjects came in on 5 consecutive days for testing. Using the technique mentioned above, we electrically stimulated the subjects’ tibial nerve to induce a cramp in the subject’s big toe on their dominant leg. On the first day, the stimulation began at a frequency of 4 Hz, and we raised it in 2 Hz increments until a cramp was induced (it was typically about 14-16 Hz when a cramp occurred on the first day). When a cramp occurred, we told the subject not to fight the cramp, but to let it last until it alleviated by itself. We measured the intensity of the cramp by EMG analysis, which measured muscle activity, and we also measured how long the cramp lasted in seconds.

Each subsequent day, the subject received electrical stimulation at a frequency of 5, 10, 15 or 20 Hz above their threshold frequency. We again measured the intensity of the cramp by EMG analysis and measured the duration of the cramp in seconds.

We concluded that 15 Hz above threshold frequency was the ideal stimulation frequency for scientists studying muscle cramp treatments to use in the future. It created an intense cramp that lasted for an average of 78 seconds. It was also comfortable enough for the subject to handle.

This was a significant find in the world of science. Now further research can be conducted on finding treatments and prevention strategies for muscle cramps.

I was able to present these findings in poster format at the National Athletic Trainer’s Association Symposium 2009 in San Antonio Texas. There is also a journal article currently under the peer review process in the Journal of Sport Sciences. 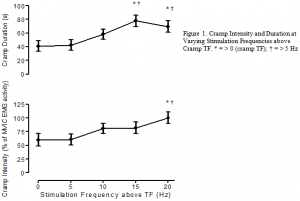