Progression to type 2 diabetes (T2D) includes a loss of functional pancreatic beta cells (β-cells), which are responsible for secreting insulin and maintaining healthy blood sugar levels. Nr4a1 is a gene that has been shown to be involved in fuel utilization in the liver, muscles, and adipose tissues,1, 2, 3, 4 but not much is known about its role in the β-cell and T2D progression. We therefore set out to further define Nr4a1’s role in the β- cell during T2D progression. We hypothesized that the loss of Nr4a1 in the pancreata of mice would result in decreased β-cell maintenance and expedite the development of T2D in an obesity-induced model.

To test this hypothesis, we used the Nr4a1Flx/Flx, INS1-CRE-ERTM+ (Cre+) and Nr4a1Flx/Flx,INS1- CRE-ERTM- (Cre-) mouse strains. Equal numbers of mice (age and gender matched) were fed either a low-fat (LF) chow (10% kcal fat, 70% carbohydrates) or a high-fat (HF) chow to induce obesity (60% kcal fat, 21% carbohydrate) starting at three months of age. Mice were injected with a dose of tamoxifen (2mg/40g body weight, dissolved in corn oil) every other day for a total of three injections beginning at 3 months of age. We confirmed that this injection deleted Nr4a1 in the pancreata of Cre+ mice while Cremice maintained normal Nr4a1 expression. Mice stayed on their respective diets for the next 12 weeks, during which time their blood glucose levels were measured weekly. Glucose tolerance tests (GTT) were performed at 0, 4, 8, and 12 weeks post-diet intervention. To perform a GTT, mice were fasted for 6 hours and then injected with a 20% glucose solution (0.1 mL/10 g body weight) to increase their blood glucose levels. We measured blood glucose levels immediately before and 15, 30, 60, and 120 minutes after glucose injections. This test shows how efficiently the mice secrete insulin to return their respective blood sugar to normal levels, thus evaluating β-cell function. All data was analyzed using ANOVA via GraphPad Prism.

Figure 1 shows the averages of weekly blood glucose readings for HF-fed male (A, C) and female (B, D) mice with (Cre- on graphs) and without (Cre+ on graphs) pancreatic Nr4a1 expression. Analyzing the area under the curve (AUC) for each line in graphs A and B reveals that mice without pancreatic Nr4a1 expression (Cre+) have significantly lower blood glucose levels for both genders, suggesting that Nr4a1 indeed plays a crucial role in the β-cell in maintaining healthy blood glucose levels.

Surprisingly, AUC analyses for HF-fed female mice exhibited significant differences in an opposite manner. HF-fed female mice with normal pancreatic Nr4a1 expression (Cre-) had a significantly smaller AUC compared to HF-fed female mice with deleted pancreatic Nr4a1 expression (Cre+) (D). This data suggests that, contrary to what we saw in male mice, female mice are better at tolerating glucose and secreting insulin to maintain normal blood glucose levels when Nr4a1 is normally expressed in the pancreas. Additionally, this difference in data between genders suggests the role of Nr4a1 in glucose tolerance and insulin secretion is gender-specific.

In summary, Nr4a1 does play a role in beta cell function, and improper expression can lead to high blood glucose levels, impaired insulin secretion, and other conditions characteristic of T2D progression. Going forward, we will conduct experiments to more precisely measure insulin secretion differences for mice with and without pancreatic Nr4a1 expression for both genders. We will also look further at the effects of pancreatic Nr4a1 deletion on fuel utilization and β-cell mass. 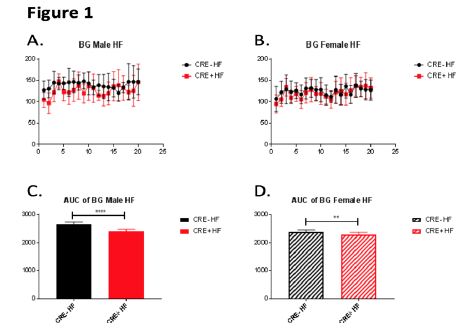 Figure 1 – Blood glucose measurements and corresponding AUC analyses for male (A,C) and female (B,D) mice on a high-fat (HF) diet over the course of the project. The numbers on the X-axes for A and B signify the number of weeks post-feeding intervention, and the Y-axes for A and B are the average blood glucose levels measured in mg/dL. C and D show the calculated areas under the curves (AUC) for A and B, respectively, with the Y-axis numbers signifying area. 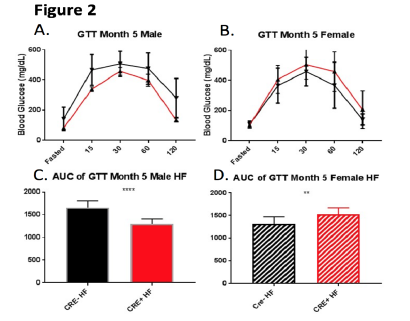 Figure 2 – Average blood glucose readings and corresponding AUC analyses for high-fat (HF) fed male (A,C) and female (B,D) mice at five months of age. The X-axes in A and B signify the time elapsed (in minutes) since the glucose injections and the Y-axes in A and B signify the average blood glucose levels measured in mg/dL. C and D show the calculated areas under the curves (AUC) for A and B, respectively, with the Y-axis numbers signifying area.