Valproic acid (VPA) is a common drug used to treat epileptic seizures as well as bipolar disease. Over the past decade, the use of these drugs has increased dramatically as they are now being prescribed as antipsychotics, mood stabilizers, and are currently being tested as chemotherapeutics and for managing human immunodeficiency virus infection. VPA also leads to birth defects when pregnant mothers take this drug. The most prevalent of these birth defects is spina bifida, a defect resulting from improper neuronal development, leading to deformation of the spinal cord. However, because of the effectiveness of the drug for some expecting mothers, VPA therapies are unavoidable.

The research used HeLa cells, a cancer cell line, that had been CRISPR engineered to allow hyper expression of Nrf2 by knocking out KEAP1, a protein that ubiquinates Nrf2. In wild-­type and knockout lines, we had inserted a FRET probe, redox fluor (RF), that reports real-­time protein oxidation states. We first began our experiment using the confocal, a machine that would measure the difference of florescence in this probe. Each well of cells was dosed with a varying concentration of VPA, a positive control of hydrogen peroxide, or an undosed control. However, in all experimental conditions, even the positive control, differences between each condition were unreadable.

To combat the problems with the confocal a different technique was used to analyze the probe, called flow cytometry. Sets of cells were dosed with 5mM VPA at different time points or a positive control 5 minutes before reading. The cells were then compared to a HeLA cell line without the redox flour probe, to measure the activity of the probe. Using this method, we were unable to see any shifts activity, even in the positive control. Further research stemmed the conclusion that the probe was not the most effective way to measure Nrf2 activation.

To better represent development an embryonic carcinoma cell line, or stem like cell line, called P19 cells was used. These are cells that have stem like properties and can be differentiated into neurons over the course of seven days. With this cell line we first ran baseline tests to see how basal levels of nrf2 changed over the course of differentiation. Cells were collected at 12-­hour time points over 4 days of differentiation in 150ul of RIPA. Samples were then run on a western gel using consistent protein amounts. After running the gel samples were normalized the levels found to an actin control ran with the nrf2 samples. Membranes were read on the Odyssey Clx scanner.

A BIAM assay was run to determine levels of protein oxidation over the course of differentiation, and how these levels were affected by VPA and D3T. To determine the dose of VPA a cell viability assay was run to determine the maximal dose of VPA that would not affect cellular viability. Cells were dosed at a variety of VPA concentrations and .5mM VPA was the maximal dose of VPA that would not affect cell viability (figure 2). Half the cells were pretreated with D3T and half with a PBS vehicle. Following 6 hour D3T or PBS pretreatment cells were dosed with .5mM VPA for 12 hours. Cells were collected in RIPA lysis buffer with 1:100 protease inhibitor and 50uM biotinylated iodoacetamide (BIAM) and incubated at 37 C for 20 minutes. Samples were then treated with iodoacetamide and left at room temperature for 10 minutes then frozen. Samples were then run on a 10% polyacrylamide gel and probed with streptavidin diluted 1:5000 in PBST. They were then washed with PBSt and read on the Odyssey Clx scanner.

This study demonstrates that dosing cells with VPA causes protein oxidation during the course of differentiation of an embryonic carcinoma cell line, specifically P19 cells. The research also shows that with up regulation of the Nrf2 transcription factor through D3T there is a recovery to a normal oxidation state as compared to the control.

Future directions include repeating these experiments to confirm findings, and statistical significance, and measuring other downstream targets of nrf2 up regulation, to see where these proteins are most active over the course of differentiation.

Figure 1 – Levels of Nrf2 present over 4 days of differentiation in P19 cells. No statistical difference.

Figure 2 – Cell Viability Assay. Significant difference in viability from undosed control at doses of 1mM VPA and greater. No statistical difference at .5mM dose of VPA. 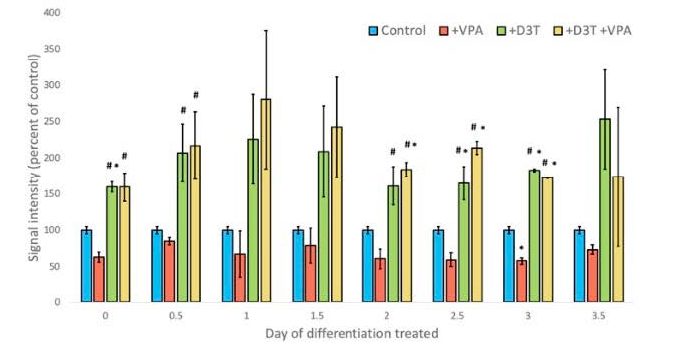