The causes of the majority of birth defects remain largely unknown today. However, many chemicals known to cause defects are also known inducers of oxidative stress, resulting in faulty cellular function. This suggests an important link between oxidative stress and normal and abnormal embryonic development [1]. Oxidative stress is a phenomenon caused by an imbalance in the production of reactive molecules derived from oxygen called reactive oxygen species (ROS). Although basal levels of ROS are necessary in order for normal cell function to occur, an overabundance of ROS interact with molecules that they shouldn’t, disrupting vital cellular pathways. This is termed oxidative stress.

Nuclear factor erythroid 2–related factor 2 (Nrf2) is a protein that acts as an important regulator of antioxidants, biomolecules that effectively prevent the oxidation of other molecules by ROS. Antioxidants are what maintain the ROS and redox balance necessary for cells to function normally. Nrf2 can be activated by chemicals found both naturally and synthetically. 3H-­1, 2-­ dithiole-­3-­thione (D3T) is a natural Nrf2 inducer that can be found in cruciferous vegetables, cabbages, and mustard plants. Valproic acid (VPA) is a known teratogen that is commonly used among pregnant women as an antiepileptic drug [2]-­ as well as a treatment for depression, bipolar disorder, and migraine headaches [3]. Upon treatment with VPA, cells are known to experience oxidative stress due to an increase in ROS [4]. The goal of this project is to determine whether pretreatment of mouse embryonic carcinoma cells with D3T protects against VPA-­ induced oxidative stress during neuronal cell differentiation.

Over the course of this project, we differentiated mouse embryonic carcinoma cells (P19 cells) into neurons using 0.5 mM retinoic acid. Neuronal cells are an ideal model for this project because we are interested in studying birth defects associated with brain development. We used a cell viability assay to determine what concentration of VPA would oxidize our cells without being entirely toxic.

We treated P19 cells with VPA for twelve-­hour time intervals before collection at several different points during differentiation (day 0, day 0.5, day 1, day 1.5, etc.). Select cells were also treated with D3T six hours prior to VPA treatment. A control group and a D3T only group were included as well. From there, we measured levels of βIII-­tubulin, a marker of neuronal differentiation, using western blot analysis.

Upon analysis of our βIII-­tubulin blots, we found that cells treated with VPA only on days 0, 0.5, 1.5, 2.5, and 3 showed less differentiation by day 4. These results showed statistical significance-­ denoted by a p-value less than 0.05- when data were analyzed using Prism 7 software. The treatment of D3T 6 hours before VPA treatment on days 0 and 0.5 attenuated the harmful effects on differentiation. GSH redox potential data were inconclusive. 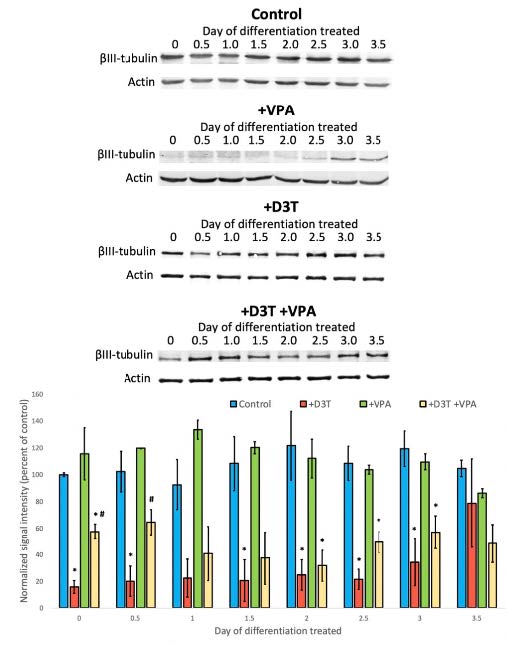 Based on our results, it appears that VPA exposure indeed alters proper P19 neuronal differentiation. However, Nrf2 induction using D3T prior to VPA treatment shows protection in differentiating P19 cells, as hypothesized.

That being said, in the future there are aspects of our study that must be built upon to ensure the validity of our present conclusions. We must determine if Nrf2 regulated genes are differentially upregulated at any point during P19 differentiation as well as at what time points this upregulation occurs. By doing so, we can confirm that the Nrf2 pathway is indeed involved in protecting embryos against oxidative stress during neurogenesis.