The placenta is an organ composed of highly vascular tissue. It plays an essential role in healthy fetal development as a mediator of gases and nutrients between the mother and fetus. Many complications can occur in this stage of fetal development, such as intrauterine growth restriction (IUGR) when the placenta’s invasive and vascular roles are inhibited. IUGR is an obstetric complication that affects over 10% of the population causing harmful symptoms to the fetus and mother. Physiologically, in the first trimester, high trophoblast cell invasion occurs, and the spiral arteries dilate to create a low resistance, high capacity vessel capable of meeting the needs of fetal development. However, in IUGR low trophoblast invasion and spiral artery conversion are observed leading to low nutrient exchange and hypoxic conditions between the mother and fetus.

During this complication, the placenta activates pyruvate kinase M2 (PKM2), a glycolytic enzyme that plays a significant role in cellular respiration. It catalyzes the transfer of a phosphate group from phosphoenolpyruvate to ADP. PKM2 has been studied extensively for its role in proliferation as it is found primarily in cells that have high levels of nucleotide synthesis such as proliferating cancer cells and developing embryonic tissues. We investigated the activation or inactivation of PKM2 during embryonic and placental development. This project will further investigate the role and protein pathways associated with the expression of PKM2 in IUGR and normal trophoblast cells. This will elucidate possible therapeutic targets for preventing complications from obstetric diseases like IUGR. Current PKM2 projects have progressed due to the results from this study.

SW71 were grown in RPMI medium supplemented with 10% fetal bovine serum, 1% penicillin, and streptomycin. An xCELLigence RTCA DP instrument (Cat. 05469759001) was utilized to determine real time invasion and cell motility of the SW71 cells. Invasion was assessed in 16 well CIM-Plates (Cat. 05665817001) (n=4) composed of an upper and lower chamber, each containing 16 wells. The top wells were coated with a 1:40 matrigel concentration and incubated for 4 hours. Cells were plated on the top well at a concentration of 20,000 cells/well in the presence or absence FBP6 or Shikonin. The cells were allowed to migrate toward the bottom chamber wells which were filled with 160 μL of 10% FBS growth medium, as a source of chemoattractant (directional migration). The cells were then placed in the RTCA DP instrument and invasion readings were done every 5 minutes for 24 hours. Nuclear and cytosolic protein extraction of cell treatments was performed and immunoblotted against phosphorylated PKM2, total PKM2, and Actin, data shown as Mean±SE. P<0.05 was considered significant.

We conclude that PKM2 regulates trophoblast cell invasion depending of its cellular localization. Furthermore, our results suggest that PKM2 regulation is affected by hypoxia. These results suggest that PKM2 could be a mediator of trophoblast cell invasion and its abundance influences the development of complicated pregnancies like PE. These findings have helped our research expand, and we are currently investigating other proteins that play a role in inducing IUGR through collaborations with other professors. 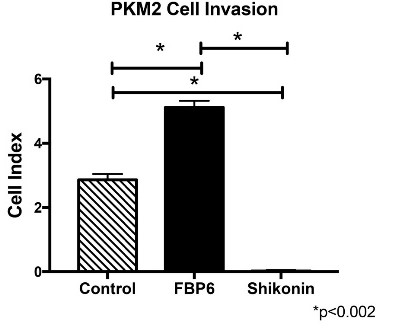 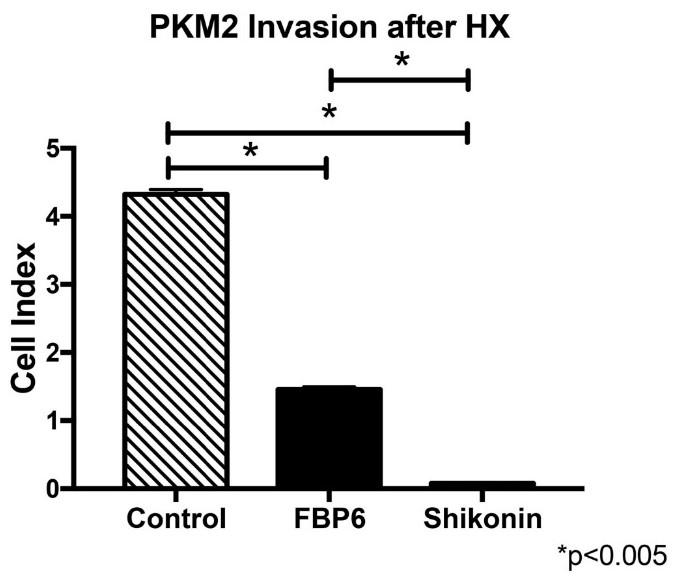 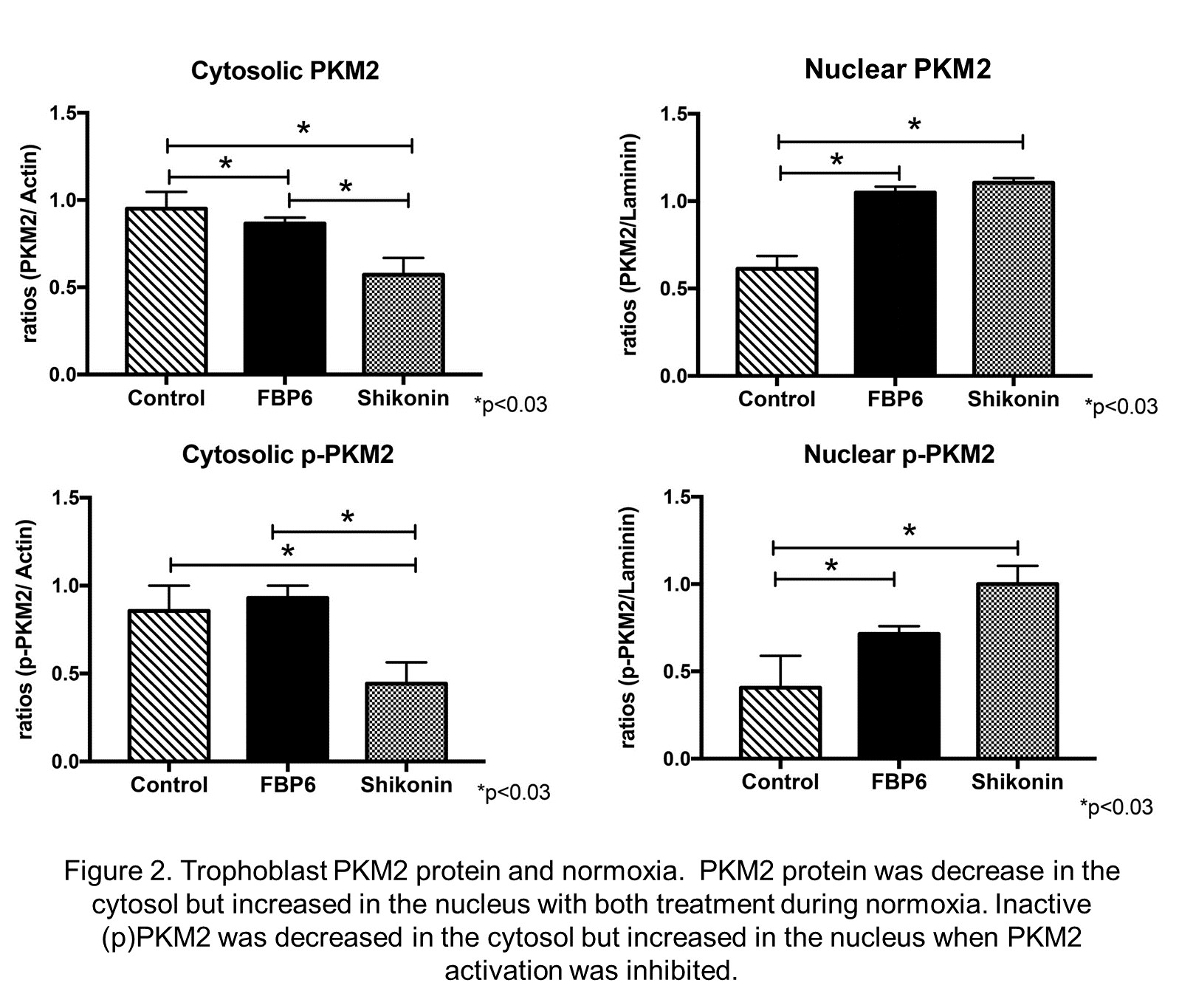 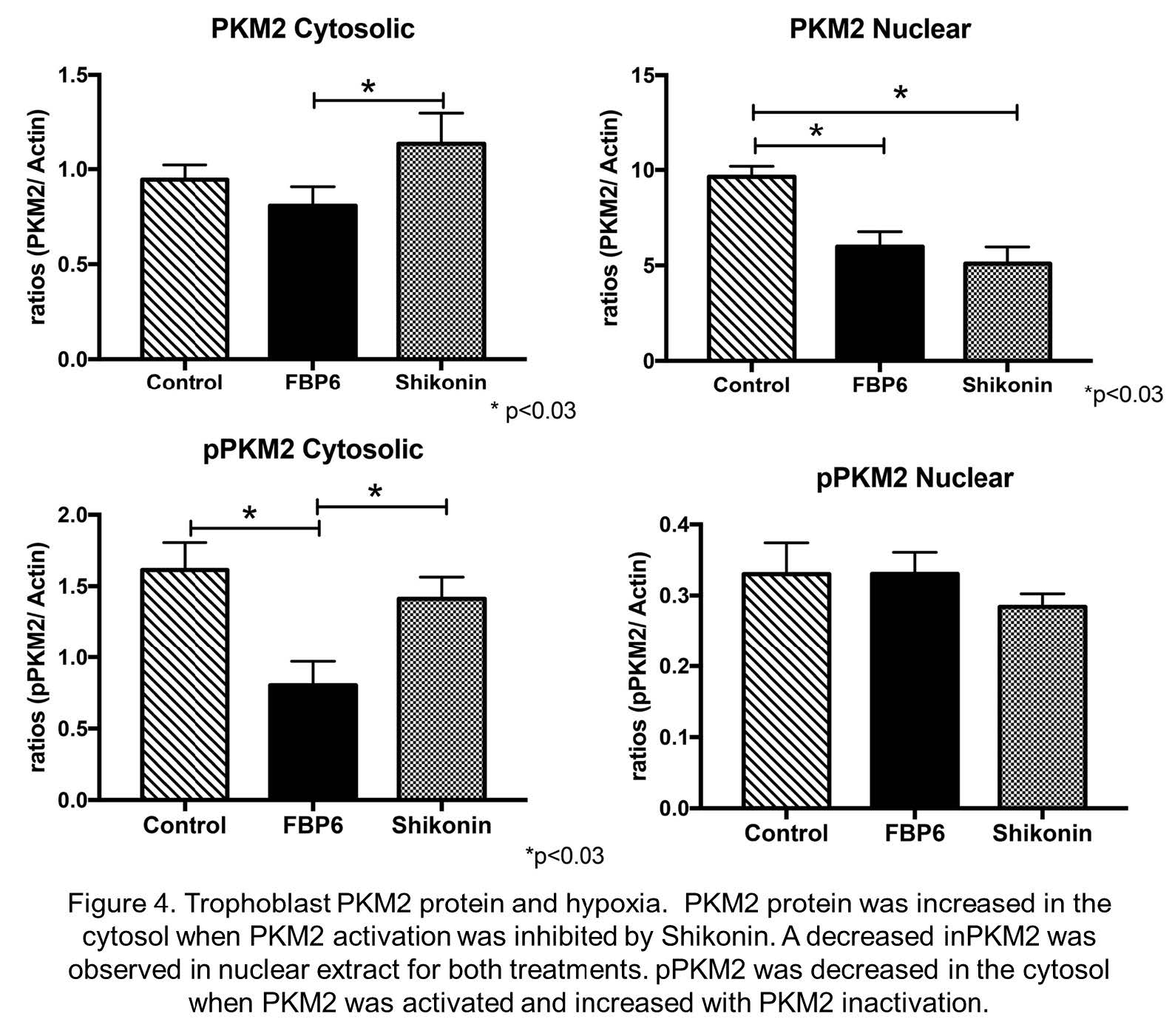