For years, the delivery of payloads into space was unavailable to universities and small spacecraft companies. With growth in the space industry and advancements in rocket technology, space payload deployment became an option but was still cost-prohibitive for most. Sounding rockets, small rockets designed for low-cost, flexible access to space, were the solution. Although sounding rockets make access to space noticeably less expensive, the cost is still out of reach for low-budget space experiments. The great challenge of today is making these launch vehicles more efficient and affordable.

Currently, the large cost of a sounding rocket is, in part, due to the tedious and expensive manufacturing processes used in solid rocket motor construction. Our research targeted optimization of the motor casing, the heaviest part of the rocket. We developed a more cost-and-time-effective method of manufacturing composite motor casings, making it cheaper and easier for consumers and universities to deliver their small space payloads.

This new design shifted our focus from the casing itself to the closures on the forward and aft ends. Our first design looked much like that of a common all-aluminum solid rocket motor. Small changes were made to the forward and aft closures in order to replace the aluminum motor casing with one made of carbon fiber. This design was simple, but untested. After many small-scale tests to better understand the mechanical properties of our carbon fiber motor casing, a small test motor was built and tested. 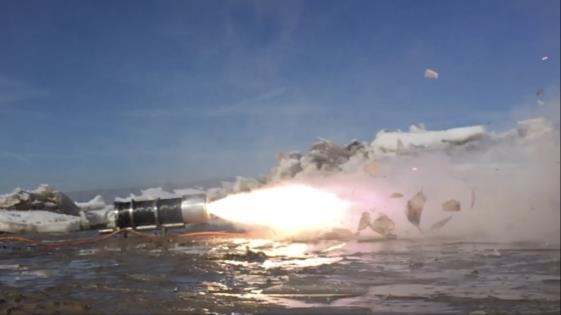 The purpose of this first test was to prove concepts and validate our steps up until that point. We knew that this test would not remove all of the unknowns for the full-scale test, but it would help us to find any flaws in the design that might have previously been unaddressed. On the 15th of January, our small-scale rocket motor was hot fired. The test was a full success. After the test, the Figure 1: Sub-Scale Test motor was dissected and closely examined. We were able to validate previous design decisions and move forward with the completion of the final design and the manufacture of the full-scale rocket motor.

The next two months were spent manufacturing the full-scale rocket motor and its static test stand. Our design allowed for a more flexible manufacturing schedule, reducing the cost and complexity of the process. All composite materials were made at the Davis Applied Technical College under the direction of our advisor, Dr. George. All other components were made at BYU. The rocket motor was fully assembled on March 14th. 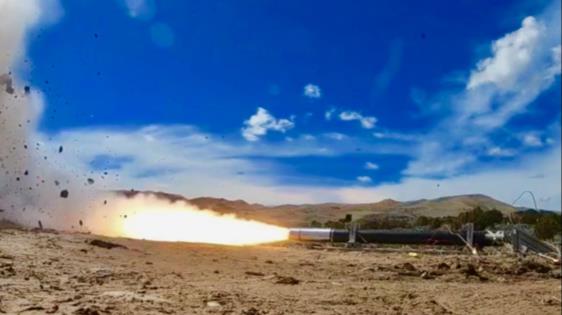 On the morning of March 16th, the rocket motor was tested at an approved area in Mona, Utah. The test was a full success. Pressure, temperature, and thrust data were all recorded. With 30 pounds of solid rocket propellant and a propellant mass fraction of 0.75, the motor produced a total impulse of 30,000 N•s with an Isp of 130 s. This was the most efficient student-built solid rocket motor ever tested. However, the most considerable feat was the price of $1,500 for the development of the rocket motor.

The motor was then integrated into a rocket for flight testing. On June 19th, the rocket was launched from Spaceport America in New Mexico. The rocket motor performed perfectly. However, due to high aerodynamic stress, the rockets four fins were lost on ascent. All components of the rocket were recovered, including flight electronics. The rocket reached a maximum velocity of 3.5 Mach and a maximum acceleration of 60 G before the failure.

Improvements to the current rocket motor design continue today. The next rocket motor has an even more simple design but a large increase in performance. With no metal components, the weight of the rocket motor will be reduced significantly and the propellant mass fraction will increase by 20%.

As rocket motor efficiency and cost-effectiveness increase, so will accessibility to space. We aim to continue our research and develop a rocket motor capable of lofting a vehicle into space. As the first student-built rocket to reach space, it will prove that space is not limited solely to those with bottomless budgets. And as space becomes commoditized, advancements in both space and earth technologies will increase at a booming rate.