The genus Gilia has historically been difficult to work with because identification of the genus via a dichotomous key relies heavily on the absence of characteristics instead of the presence of unique characteristics (Johnson et al., 2004). This has caused Gilia to become a polyphyletic group that serves as a “dumping ground” for odd species that do not easily fit in any other genus within the family. Studies using morphological and molecular data have identified species traditionally placed in Gilia that are really more closely related to other genera. For example, Gilia gilioides belongs in Allophyllum, Gilia capillaris belongs in Navarretia, and Gilia caespitosa belongs in Aliciella (Johnson et al., 2008). The Jepsen Manual – Vascular Plants of California has incorporated these changes while A Utah Flora continues to hold on to tradition. Also, after collecting Gilias and studying herbarium sheets, I have come to realize that A Utah Flora recognizes only two Gilia species with cob webby hairs on their leaves. One has only been found in the state once, but the other is represented by over 300 herbarium sheets in BYU’s herbarium. This latter “species”, Gilia inconspicua, can be divided into multiple species that are morphologically different and recognized as different species in the literature. Consequently, the biodiversity of species in Utah is misrepresented. Unfortunately, due to the large number of Gilias that are unique to California, and species such as Gilia tweedyi that have been documented in Utah but do not occur in California, The Jepsen Manual cannot be just substituted for identifying Utah’s Gilias. Most taxonomic work on Gilia has taken place in California where the genus (and family) is especially diverse, with little work being done on species that occur outside of California. I intend to provide the first focused study of the genus in Utah. The focus of my project was to create a dichotomous key to identify the species that are present in Utah according to Herbarium specimens, and then select individual specimens that represent the different Gilia groups found in Utah to compare specific genetic marks that have been historically used to classify species in this genus in order to gain more understanding about our classifications.

The methodology of this project was to begin analyzing the morphological features of the Gilias, and then analyze the molecular data using sanger sequencing to compliment the work done with morphology. I began by taking note of the individual characteristics of each of the herbarium mounts for the Gilia genus at the BYU herbarium. I measured the following features: the caylx glandularity, the degree of pinnation of the basal leafs, the type of stem hair, whether the cauline leaves where clasping, whether the caylx membrane was keeled, the size of the lobes of the caylx, the color of the caylx, if the inflorescence was clustered, color of the caylx tube, the length of the stamens, and length of the corolla. These traits are important characteristics traditionally used to identify the individual Gilia species. Using the description of the Gilia species found in the Jepsen manual and in Utah A Flora, I began to determine which species the individual herbarium mount most closely resembled. Once all of the Herbarium specimens were categorized using morphological features, we selected specimens from each group that represented the groups morphology. We also included any outliers that didn’t exactly fit in any of the described groups. We used Sanger sequencing to sequence chloroplast DNA to compare genes that have been historically used in the phylogenetic work of the Gilia genus.

Our morphological analysis resulted in the classification of 8 species that were traditionally being classified as Gili inconspicua in the State of Utah. These 8 species are Gilia stellata, G. sinuata, G. inconspicua, G. clokeyi, G. ophthalmoides, G. transmontana, G. brecciarum, and G. modocensis. We also observed that Gilia inconspicua was only identified in one county in the state of Utah, Washington county. The molecular data showed that our morphological grouping of Gilia clokeyi and Gilia opthalmoides was consistently distinct. Included in the figures is our derived dichotomous key that we created throughout this project. 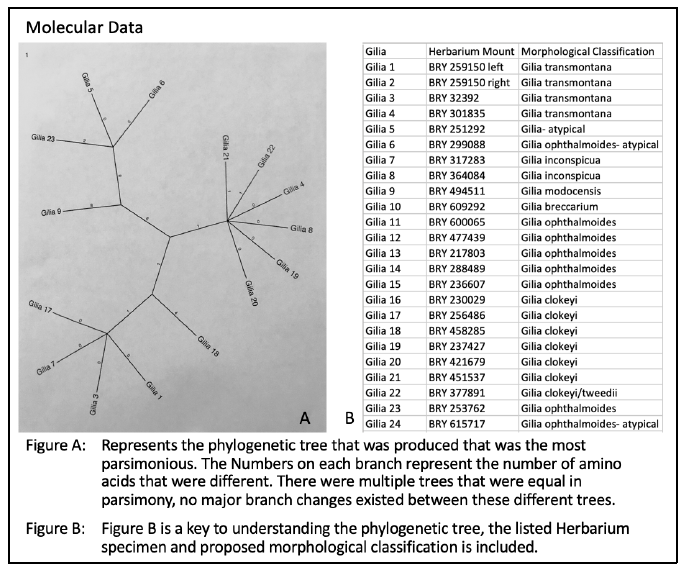 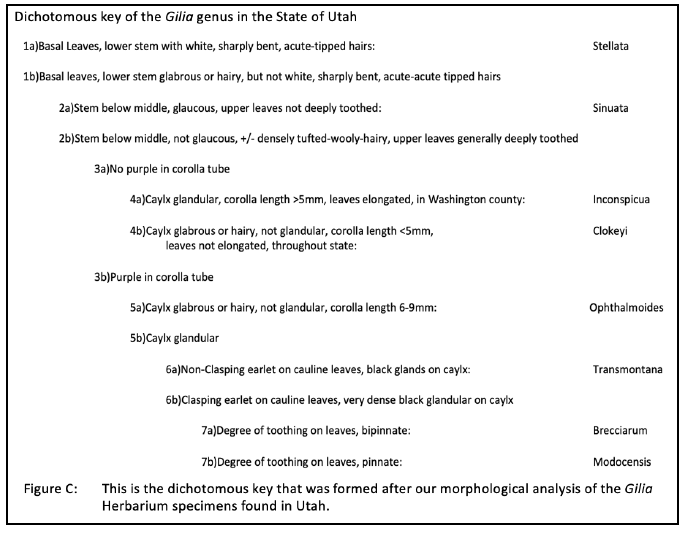 The results of our project show that the traditional treatment of the Gilia genus in Utah was inaccurately depicting the biodiversity of the Gilia genus. The species, Gilia inconspicua, that everything was being classified as has a significantly more constrained range than what was being reported. Gilia inconspicua is isolated to just Washington country according to our classifications. We also observed that two of the Gilia species that are traditionally difficult to classify morphologically (Gilia clokeyi, and Gilia ophthalmoides) were consistently distinct molecularly according to our new dichotomous key’s classification.

In conclusion, our hypothesis was supported that the traditional treatment of the Gilia genus in the State of Utah was inaccurately representing the biodiversity. In the future, we hope to further analyze the specimens that were outliers in our analysis and determine whether or not they represent novel species.