Alfaro cultratus is a freshwater fish native to Costa Rica.1 The common name for Alfaro cultratus is ‘the knife edge livebearer’. It is named after its sharply keeled ventral surface which allows for movement through river currents with speed and agility. Yet this species is a live-­bearer, meaning it gives birth to free-­swimming young rather than laying eggs. Its shape does not allow for the normal distended abdomen during pregnancy like other live-­bearers. This morphology likely provides advantages in high flow regimes, but produces costs for reproductive investment. To begin looking at this paradoxical evolutionary trait, I looked at the possibility of morphological variation in other stream flow regimes.

Body shape is known to differ in various flow regimes for many fish.2 One study done on a mosquito fish (Gambusia species-­ related to Alfaro cultratus) found physical variation between the same species in different flow regimes.2 They found a higher amount of fusiform, stream-­lined body shape, in high velocity environments. I performed a similar analysis on Alfaro cultratus hypothesizing that a stream-­lined body shape is more advantageous in high stream gradients than in low stream gradients. Therefore, I expect to see a greater variety in body morphology in lower stream gradients than higher;; I also expect to see stricter stream-­lined body morphology found in high stream gradients. The results of this experiment will provide a basis for further life history analysis on this species.

Samples of Alfaro cultratus have been taken at various sites over the past 20 years. Specimens were analyzed for this project if they were whole and had GPS coordinates and elevation data from the collection site. Approximately 480 fish were analyzed over 16 different sites.

Stream flow changes in different seasons, so stream gradient was used to define flow environment rather than flow velocity.3 Stream gradient for each collection site was analyzed using ArcGIS pro. Slope information was extracted using a 90m digital elevation model. Each location was then classified as low, medium or high flow. Raster values were used to classify stream gradient levels: high>2.5;; 1>medium<2.5;; low<1 (Figure 1). Most streams were in the low to medium gradient levels.

All 480 fish specimens were photographed. Twelve landmarks were digitized using tpsDIG software.4 Landmarks were then standardized to remove size variation from the analysis. Principle components were then plotted in tangent space. This analysis as well as further analysis will be done using the Geomorph package in R.5

Initial analysis shows possible shape differences in flow regimes. Figure 2 displays specimens graphed in relation to the two most common relative warps (common shapes). The graph displays percent variation from the average shape. From the graph, it appears that fish in low and medium flow regimes have a greater variety of shape variation than fish in high flow regimes. However, further analysis is needed to discern if that is significant and if the high gradient morphology is consistent with predictions. It is also possible that differences may appear from a smaller sample size of high regimes, therefore, additional specimens from these environments should be collected for more accurate results.

If there is greater morphological variation in low and medium gradients, then I would predict that a stream-­lined body morphology limits reproduction and is therefore reduced in more gentle flow regimes. If this is found in further analysis then I will continue to investigate this question further by comparing it to reproductive investment found in these fish within these environments. 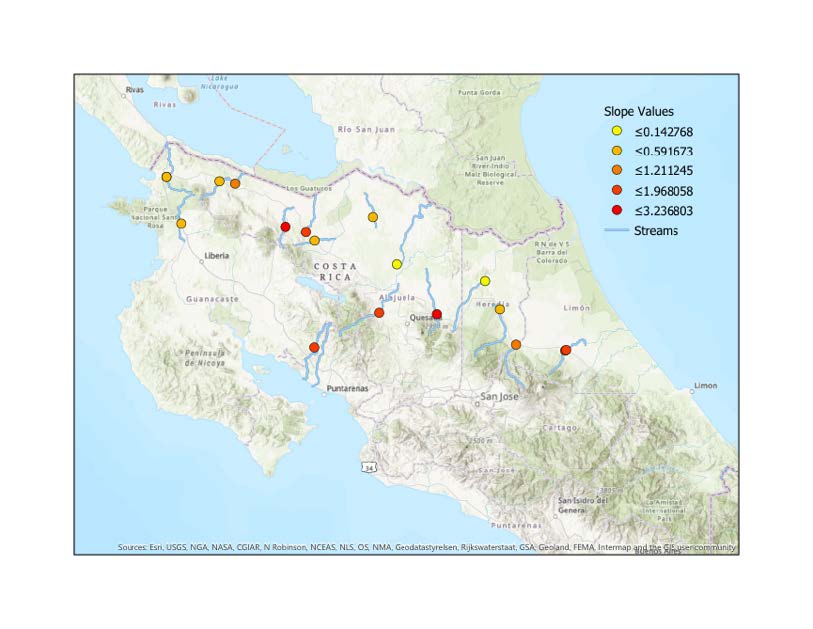 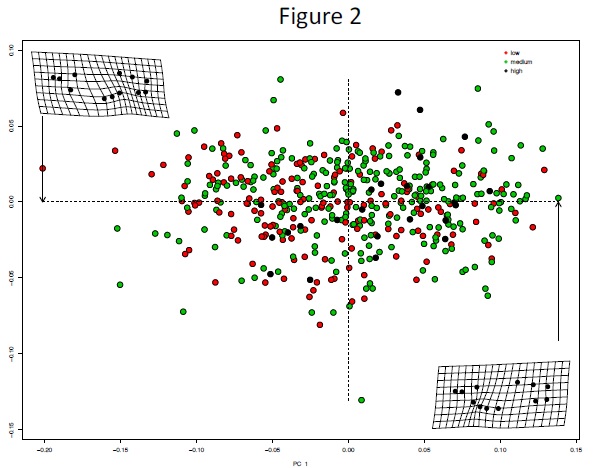