Objectives Met
The purpose of this project was to evaluate program to education parents of children with autism in the Republic of Macedonia, located in Southeastern Europe. Macedonia has many factors that made it an important research site. Poverty rates, ethnic conflict, and access to professional resources make parenting a child with autism very difficult in Macedonia. This project sought to alleviate some of these burdens by providing a training model where parents trained each other on simple interventions to help their children.
The project had four primary objectives. The first was to publish the findings of the study in a top-tier, peer reviewed journal. The second was to make the international experience meaningful for professional outcomes of the students who were involved. The third objective was to mentor students on research skills that would help with future education and professional goals. The fourth objective was to impact the participants and others we interacted with in the study in a positive way.

Scholarly Publication
To date, the study has resulted in one scholarly publication. The study was published this year in the Journal of Autism and Developmental Disorders, which is a high quality, peerreviewed publication. My department considers this journal to be a Tier 1 outlet. The manuscript was co-authored by four students who traveled with us including two undergraduate students (Lucy Orton and Chase Adams) and two graduate students (Laura Knecht and Sophie Rindlisbaker). In addition a graduate student and professor from Macedonia co-authored the publication. Lucy and Chase are currently in graduate programs at other universities (Florida Institute of Technology and University of Illinois) and Laura and Sophie are completing internships in school psychology. Laura and Sophie completed their theses from data collected during the study was well.

International Experience
Six students including two graduate and four undergraduate students traveled to Skopje, Macedonia as a part of this research project. Prior to the trip, Chase Adams, undergraduate in linguistics provided language instruction in the Macedonian language. Each of us acquired basic Macedonian skills which helped as we worked there. While in Macedonia we visited several schools for children with disabilities. I provided a lecture at Saints Cyril and Methodius University that the students who traveled with us attended and had the opportunity to interact with Macedonian students. The students had several meaningful opportunities to assist with a research project in Macedonia which will contribute to their careers in the discipline of their choice.

Mentoring on Research Skills
This objective was met by providing instruction on how to conduct a study in an international environment and publishing the study. Prior to travel we spent the Winter 2016 semester engaged in the language training but also in preparing materials, learning and practicing the research protocol, and organizing materials. We had multiple skype meetings with the collaborators in Macedonia. The students benefited from this environment because they each had responsibilities to various parts of the research. My research agenda benefited because this study would not have been possible if it had not been for the contribution of the students. So far two of the four undergraduate students are in graduate programs, one is still an undergraduate student, and another undergraduate has begun her career.

Impact on Families of Children with Autism in Macedonia
This component of the project is difficult to measure. The publication that was the result of this project demonstrated that parents made significant improvements in several areas of importance including self-confidence, engagement in parenting behaviors, and the children made improvements in behavior as a result of the project. The parents in the study rated the project as preferred and that they will use the skills in the future.

Mentoring Environment
The research team was formed in January 2016 shortly after we received the grant notification. We began meeting weekly to engage in language practice, logistical planning, and practicing the research methodology. The project was conducted without any major problems or negative impact on the country. 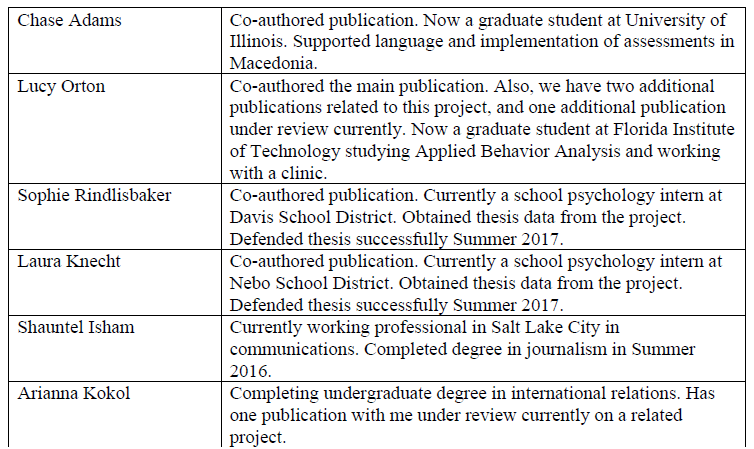 Project Description
Parenting children with autism in countries with limited professional and financial resources can be overwhelming. Parent training led by non-governmental organizations may help alleviate some of these burdens. The present pilot study was conducted in the Republic of Macedonia, a country located in Southeastern Europe. The purpose of the study was to evaluate a parent training model for disseminating evidence-based practices through didactic and pyramidal training strategies. Results indicated that children improved on a number of different behaviors and results provide some evidence that parenting confidence and distress improved as a collateral effect. A total of 18 parents participated, but 15 completed all aspects of the study. The study was published in the Journal of Autism and Developmental Disorders.

Budget
The budget was used as we described. We also used funds from my research account from ORCA grant awards (for portion given to faculty) and from college poster session awards. 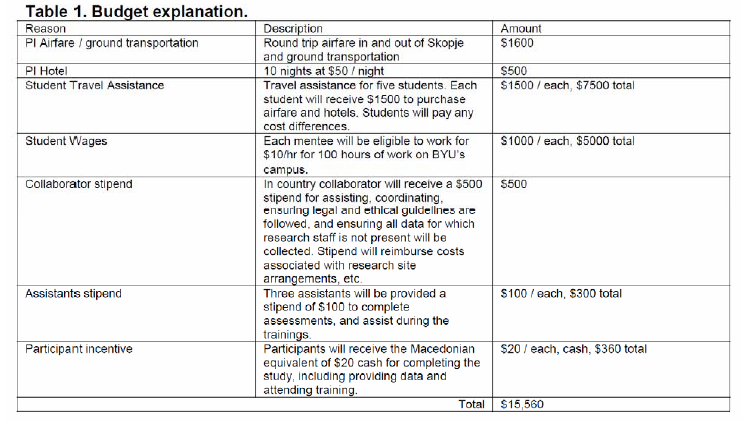