Introduction
With the global human population spiraling upward and the intensity of climate-change-induced
drought events increasing, there is a growing need for identifying and developing highly
productive, stress-tolerant crops that can be cultivated in marginal lands (Yang et al., 2015).
Species within the Opuntia genus exhibit several traits, which enable them to withstand drought
while growing in nutrient-poor soils (Nobel, 2010). However, these Opuntia species lack
sufficient cold hardiness to be produced beyond northern Mexico (Felker et al., 2006) despite an
increase in consumer demand of these pads from the Intermountain West and other parts of the
U.S (Huffcut, 2004). Our work focused on identifying cold-hardy, high-yielding Opuntia species
that can be produced more locally to satisfy growing consumer demand. We found that when
grown in a high-elevation desert, such as Utah, moderate nitrogen, phosphorus and potassium
(NPK) fertilization and the protection by plastic sheeting low-tunnels slightly enhanced survival
and fresh weight yield of O. ellisiana and other Opuntia species.
Methodology
A plot was cleared on the BYU Life Sciences Research Field where the low tunnels were
constructed using 10 ft EMT conduit, PVC, and 2 ft metal rebar to form a skeleton structure. Six
millimeter plastic sheeting was attached to the outside of the archway supports creating a “mini
greenhouse.” A total of 48 Opuntia cladodes were cut including 16 each of two different O.
ellisiana genotypes and one variety of O. ficus-indica. Fresh weights of these pads were
recorded before the planting took place. Then, using a randomized split-plot design, individual
Opuntia plants were planted and assigned fertilizer
levels (0 g N m-2 (control), 4 g N m-2) as split-plot
treatments within main plot treatments (low-tunnel 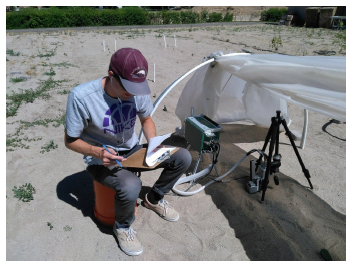 plot and exposed plot), with 24 pads in each plot.
Throughout the course of the study, on a monthly
basis, pad-level fluorescence (Fv/Fm and ΦPSII)
were measured using a LI-6400XT fluorometer.
After the Harvest of the plants, the pad’s fresh
weights were recorded and compared against the
original fresh weight using a generalized linear
model in the statistical computing software, R.
Results
The increase in fresh weight ranged considerably over the short season in which they were
allowed to grow. The lowest increase in fresh weight was 106 g while the largest increase was
1169g. However, in order to have a more level baseline to compare all of the growth in analysis,
the percentage increase in fresh weight was used to avoid biases due to the slight variations in
the initial weights, which were recorded prior to the establishment of the plot. Of note, the other
data that were collected and analyzed are not reported here for sake of brevity.
As expected, the three genotypes performed rather differently. Genotype had the lowest p-value
of all three factors at effectively zero. The O. ficus-indica, despite having the largest range and
variance, had the largest mean percentage growth in fresh weight.
Fertilizer overall was also statistically significant and yield a positive increase in fresh weight
compared to those that received no fertilizer. Of all the treatment combinations, the three that
had the highest percentage increase in weight all received the fertilizer treatment. According to
the generalized linear model, on average the fertilizer increased fresh weight production by about
154.8g for the O. ficus-indica .
The low-tunnels, by themselves did not provide a statistically significant increase in weight.
However, the interaction between the tunnels and the different cactus species was statistically
significant with a p-value of 0.004. This suggests that some of the plants were benefited more
than others, or possibly mildly inhibited, by the low tunnels. The variety of O. ficus-indica
appears to be the most benefited. Of the three genotypes the O. ficus-indica was the least cold
tolerant which would corroborate the effect of the low-tunnels.
Discussion
While the results of this experiment illustrate the possible yield increases, further study using a
longer time frame and larger number of replicates is necessary to fully understand the impact of
each of the factors used. The long growth period required to establish a highly productive
Opuntia farm, usually several years before maximum productivity is reached, suggest a long
term experiment would help predict the economic and environmental impacts of the treatments
and genotypes involved. In addition, the different fertilizer application techniques, as well as
various materials and methods for building the low-tunnels, should be studied and modified to
lower expenses and optimize utility for crop growers.
Conclusion
The different genotypes reacted very differently to the fertilizer and low-tunnel treatments and
yielded statistically significant increases in fresh weight at time of harvest. Upon analysis, a
variety of interactions between treatments illustrate the nuances and need for further study and
experimentation, but the general benefits and potential yields of each genotype and can be
reasonably inferred. The results of this study lay the groundwork for better understanding how
Opuntia, combined with different growing techniques could address many of society’s
agricultural problems.
Scholarly Sources
Felker, P., Forage potential of Opuntia clones maintained by the USDA, National Plant
Germplasm System collection. Crop Sci. 46, 2161-2168 (2006).
Huffcut, E., Nopalitos: Florida’s new niche production commodity. (Florida Department of
Agriculture and Consumer Services, Report #12-25-G-038).
Nobel, P.S., Desert wisdom/agaves and cacti: CO2, water, climate change. (iUniverse, New
York, 2010).
Yang, X. et al., A roadmap for research on crassulacean acid metabolism (CAM) to enhance
sustainable food and bioenergy production in a hotter, drier world. New Phytol. 207, 491-504
(2015).