Introduction:
Preeclampsia (PE) is a complicated obstetric complication characterized by increased blood pressure and decreased trophoblast invasion. PE is one of the leading causes of maternal and fetal morbidity and mortality in developed countries. The growth arrest-specific 6 (Gas6) protein is known to induce different responses in cells including prevention of apoptosis and enhanced cell migration and invasion. This protein is secreted in response to growth arrest and it is increased in the serum of PE patients. This discovery suggests a mechanistic role for the Gas6 signaling pathway during PE progression. Gas6 binds to the AXL tyrosine kinase receptor and AXL-mediated signaling is implicated in proliferation and migratory mechanisms in several tissues. . The role of Gas6/AXEL in control and PE placentas is unknown. Our objective was to determine the role of Gas6 and AXL signaling in the development of PE in the rat.
Methods:
Holtzman pregnant rats were treated daily with 3ug/ml of Gas6 or with Gas6 + R428 (AXL inhibitor) for 11 days from day 7 to day 17 of gestation (dGA). At the time of necropsy (18 dGA) placental and fetal weights were recorded, proteinuria determined, blood serum collected and tissues were immediately isolated for histological or respiration analysis. Immunofluorescence was performed on whole conceptus slides. Briefly, slides were washed in TBS and blocked for 30 min with Background Sniper. Slides were incubated with rabbit polyclonal primary antibody against Cytokeratin 7 (CK7). A donkey anti-rabbit Texas Red (TR) was used for secondary antibody. Slides were then developed using a TR filter. Gas6, Gas6 +R428 and control animals were sacrificed and BALF was removed. Supernatants were assayed for total protein Total numbers of pelleted cells were counted with a hemocytometer and cells stained with a modified Wright-Giemsa stain (Diff-Quik; Baxter, McGaw Park, IL) were subjected to a blinded manual differential cell count, the percent of total cells was determined. Counting was performed in triplicate and the average was obtained.
Cytokines secreted into the serum were screened by a multiplex ELISA following the Bio-Rad rat Cytokine Multiplex protocol kit. High-resolution O2 consumption was determined at 37°C in placental tissues using the Oroboros O2K Oxygraph. Respiration was determined according to various substrate–uncoupler–inhibitor–titration protocols.
Data shown as Mean ± SE. P<0.05 was considered significant Results: • Increased systolic and diastolic blood pressure with Gas6 and decreased in the Gas6 + R428 treated animals. • Increased proteinuria with Gas6 which was reduced with Gas6 and R428 treatment. • Decreased trophoblast invasion. • Significantly increased in BALF cells counts (1.8-fold p<0.003) and protein (1.5- fold;p<0.05) in animals treat with Gas 6 alone which was returns to control levels in animal treated with Gas6 and R428. • A significant increase in TNF𝛂 (14.0-fold; p<0.03, IL1𝛂 (12.8-fold; p<0.03), IL1𝛃 (9.5-fold; p<0.03) and IL6 (21.4-fold; p<0.03)with gas 6 treatment but not when animals were treated with Gas6 and R428. • Significantly decreased in general mitochondrial functioning when animals were treated with Gas6 alone. 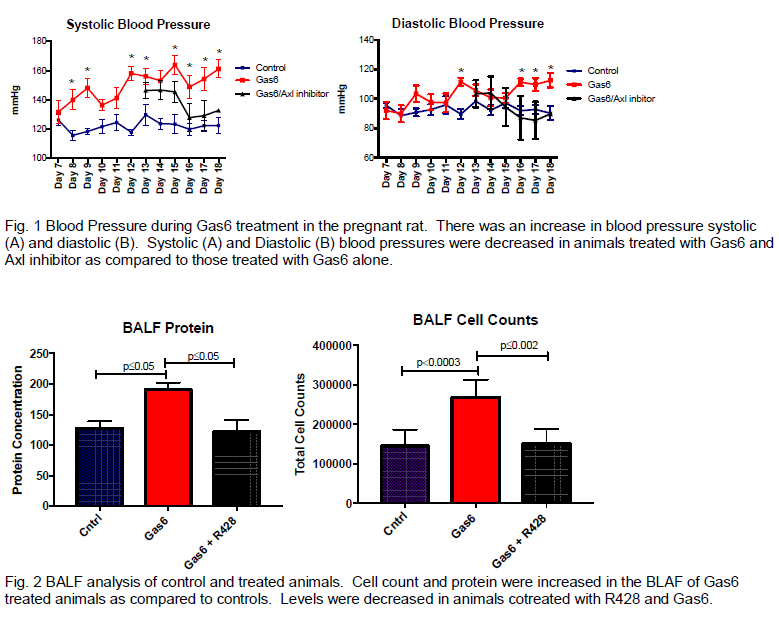 Conclusion:
We conclude that Gas6 signaling is capable of inducing PE and that inhibition of AXL
receptor prevents disease progression in pregnant rats. Our results also suggest a
possible role for Gas6/AXL interaction in the placenta and lung that could lead to the
development of this disease. These data suggest roles for Gas6/AXL in the
development of PE and offer possible treatment avenues that could help in alleviating
PE symptoms.