A correlation between Osteoarthritis (OA), affecting over 27 million people in the US [1], and metabolic syndrome (MS), affecting over 340 million people worldwide [2], becomes strikingly important as the search for an effective treatment for OA continues. Increasing evidence has shown that OA is linked to systemic inflammation and MS. With MS comes other substantial comorbidities, including diabetic retinopathy (DR). Ocular inflammation promoted through mechanically induced OA would provide evidence that mechanical stress can be a factor leading to systemic inflammation. Such results would have profound impacts upon the way we view OA as a metabolic disorder, leading to novel treatments for OA and perhaps other diseases.

The focus of our project was to find a potential correlation between inflammatory biomarkers in the knee and in the eye. In the Kooyman lab, we have already shown that mechanical stress upregulates certain biomarkers related to inflammation in the knee, causing earlier onset of OA [3]. Some of these biomarkers are also found upregulated in the eye in inflammatory conditions [4]. This, along with other evidence that we have found in our lab, suggests similar metabolic patterns regulate inflammation throughout the body. In our efforts to elucidate the pathogenesis of OA, it is essential to discover the correlation between inflammation, insulin resistance, and metabolic pathways associated with OA. The eye is an ideal organ for this task because of the geographical disconnect between the knee and the eye. Biomarkers such as TNFa or IL-1B have been shown to be upregulated in DR[5], thus being ideal targets for analysis of inflammation in the eye. Additionally, a core of biomarkers, including HtrA1, DDR2 and MMP13 constitute a well-studied pathway in the progression of OA. Curiously, HtrA1, and MMPs have also been shown to be involved with macular degeneration [4]. Our project focused on NFkB, a transcription factor that up-regulates several of these biomarkers that result in and indicate inflammation.

We performed a destabilization of the medial meniscus (DMM) surgery in two-month old, male and female, wild-type mice. After three weeks these were euthanized and their eyes harvested in order to measure the levels of NFkB in the eyes. A Western Blot was performed to quantify the protein in the eye.

Our results (see figure 1) demonstrate that NFkB protein expression was upregulated in the eyes of those mice who received the DMM surgery compared to those who did not. Since we measured the active form of the transcription factor NFkB, this indicates that inflammation was induced systemically as a result of mechanical stress applied to the joint. This finding has never been reported in the literature and is highly important.

The DMM surgery is a useful model in OA because of the permanent nature of the stressor. Once destabilized, the medial meniscus can’t recover without additional surgical intervention. This results in a constant, noxious stimulus that, in the joint, may mimic the effect of low-grade, chronic inflammation that is caused by metabolic syndrome, or Type II Diabetes. While the systemic inflammation associated with metabolic syndrome may vary in origin, this data begs the question of who came first, the chicken or the egg. While it is still not perfectly clear, these data suggest that joint injury is causing inflammation in a systemic fashion, giving us a more holistic view of osteoarthritis as a metabolic disease, or subclass of a more comprehensive metabolic disease. 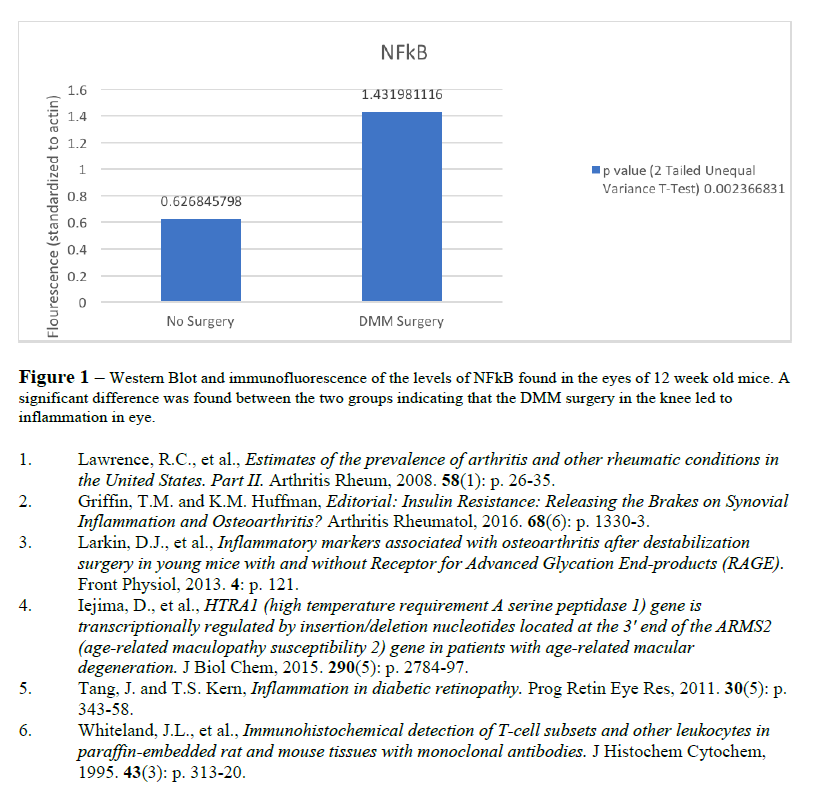