Bronchopulmonary Dysplasia (BPD) is a common respiratory disease among pre-term infants or newborns exposed to harmful toxins during pregnancy or at birth. This leads to several respiratory diseases later in life such as chronic obstructive pulmonary disorder (COPD) or asthma. However, research on the effects of cigarette smoke in utero has many gaps. This project focuses on developing a transgenic mouse model that mimics the pulmonary morphologies and characteristics of BPD. This model will then be used for further research and potentially discover new therapeutic methods for BPD.
The transgenic mouse was established using a modified genetic scheme whereby the receptor for advanced glycated end-products (RAGE) could be increased by introducing doxycycline (dox) into the mouse diet. When this RAGE protein is activated, an immune response is triggered and inflammation is recruited into the lung producing the characteristics of BPD. I proposed that the upregulation of RAGE was a sufficient and necessary factor to induce the symptoms comparable to BPD in order to create a usable model.

Characteristics of BPD
BPD has several unique characteristics within the lung that may affect the level of pulmonary function. First, the alveoli, which are small air sacs in the lung necessary for air exchange, are larger and often dilated. This reduces the amount of surface area for oxygen and carbon dioxide diffusion into the blood stream. These enlarged alveoli cause a condition called hypoxia, a low level of oxygen in the body causing harm to the newborn. Another common trait of BPD is a decrease in elastin. This creates a lung that is stiffer and less functional in inhaling large amounts of air.
The last major trait of BPD is chronic inflammation. Inflammation is characterized as an increase in white blood cells and lymphocytes to a particular area. Chronic inflammation can destroy alveoli and other lung tissue as well as increase mucous levels that may block gas diffusion. This model focuses heavily on this aspect as the transgenic mouse model creates these morphological changes through upregulation of RAGE which is a pro-inflammatory signaling protein.
Results
The transgenic mice were fed dox from days 13.5 to 18 of gestation which imitates the third trimester of pregnancy. This means that the mice were upregulating RAGE during the third trimester, increasing the amount of inflammation in the lung. We performed a bronchoalveolar lavage fluid (BALF) where we push a saline solution into the lung and then extract it to capture all the free-floating proteins inside. On average, there was a 7-fold increase of leukocytes in the transgenic mice than the wild type mice. This increase in leukocytes demonstrates a significant increase in chronic inflammation and subsequent destruction of the lung.
To characterize the general morphological changes of the lung we performed an Hematoxylin and Eosin (H&E) stain. The transgenic mouse (fig. A) demonstrates larger but fewer, dilated alveoli compared to the normal lung features in wild type mice (fig. B). The abnormally enlarged and expanded alveoli continue to confirm the transgenic mouse as a potentially significant model for BPD.
Another histological stain was performed to identify elastin, a flexible molecule to give elasticity to the lungs. The faint dark brown identifies the presence of elastin. When comparing the transgenic mouse lungs (fig. C) to wild type mouse lungs (fig. D), a surprising result revealed the transgenic mouse obtaining more elastin. This unexpectant outcome suggests that RAGE might have some play into the expression and production of elastin within the lung. This finding does contradict a small characteristic of the ideal BPD model.

Conclusion
From these initial findings, I conclude that this transgenic mouse model demonstrates enlarged and dilated alveoli with increased chronic inflammation parallel to the characteristics of BPD. However, the model reveals increased elastin that is not in concordance with normal BPD features. This may introduce some complications when performing experiments that require inhalation of controlled substances.
There still exists a large amount of work needed to complete the characterization of the model and its comparison to BPD. However, I anticipate future research will provide the needed fuel to discover an ideal model for BPD experiments and eventual treatment. 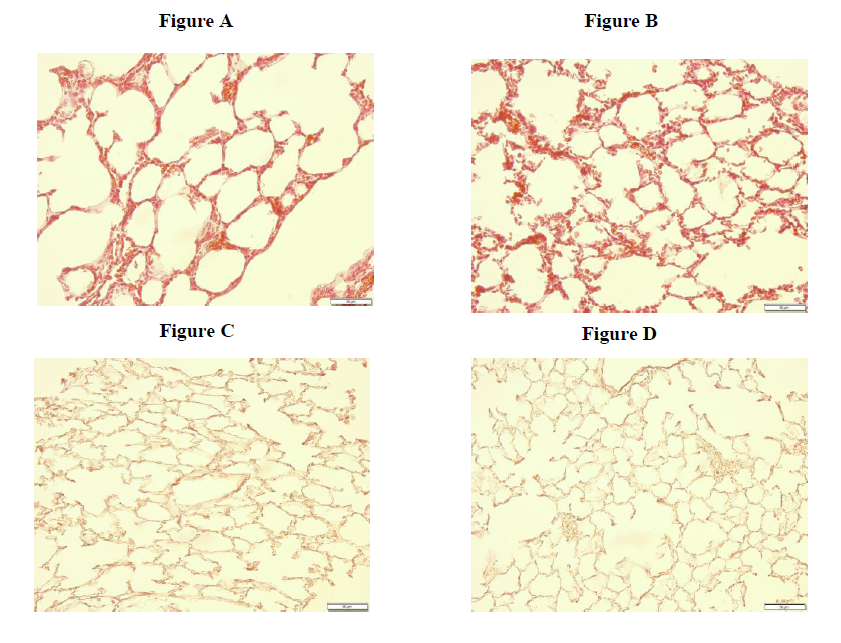