Many mental disorders plague our society. Dementia and Alzheimer’s disease have greatly impacted many victims and their families. Despite the seriousness and pervasiveness of Alzheimer’s, there is still no effective treatment for it nor the accompanying dementia. GPR18 and GPR119 are G-protein coupled receptors (GPRs) and have been identified in the central nervous system, but their functional role is unknown. Many successful drugs target GPR proteins, so examining these GPRs’ function in the brain could lead to potential targets leading to innovative medical advances.

Memory is dependent on a molecular process called synaptic plasticity. In synaptic plasticity, the strength of and sensitivity to neuronal signals are altered through long-term potentiation (LTP) and long-term depression (LTD). Based on previous research, we hypothesize that GPR18 and GPR119 are excellent candidates for a role in learning as they show similarities to previously studied receptors shown to regulate synaptic plasticity in the brain’s memory center, the hippocampus.

Our research had several phases. We performed all of the experiments using mouse models following IACUC standards. First we performed qRT-PCR (quantitative real-time polymerase chain reaction) to confirm that GPR18 and GPR119 are present in hippocampal tissue. After designing our primers, we ran it, we examined their expression at multiple concentrations of cDNA, and then confirmed the PCR by sequencing the amplicon isolated from agarose gel.

Once confirmed, we then performed immunohistochemistry (IHC) on free-floating 30μm brain slices of GAD67-GFP knock-in mice. The brains were extracted after transcardially perfusing the mice with saline solution and then 4% paraformaldehyde in 0.1M PBS. After exposing the slices to anti-GPR18 and anti-GPR119 antibodies, we imaged them using an Olympus FluoView FV1000 laser scanning confocal microscope to determine the location of the protein.

We then used slice electrophysiology to determine the effect GPR18 and GPR119 had on synaptic plasticity. We sliced GPR55 knock out mice brains using a vibratome into 400μm coronal slices and then preserved them using artificial cerebral spinal fluid (ACSF) at room temperature. We stimulated pathways leading to the hippocampus at 6-50 μA for 100 μsec at 0.1Hz sampling rate. To determine the effect of the proteins, we used the GPR18 and GPR55 agonist O-1602 (5μM, Tocris) to excite GPR18 (GPR55 effect was not observed because it was knocked out) and compared the excitation results found to excitation results from slices in vehicle solution (ethanol).

Figure 1 shows results from our IHC experiments of GPR18. The image suggests that GPR18 (red) is located around the nucleus (blue) instead of at the synapses. It also suggests that GPR18 is almost universally expressed in the excitatory pyramidal neurons but selectively expressed in inhibitory GABAergic (green) cells. We are still searching for an effective antibody in detecting GPR119.

Figure 2 shows the results of our electrophysiology experiments. The field recordings in GPR55 KO (n=2) with O-1602 shows a possible increase in induced synaptic plasticity relative to the control field experiments on GPR55 KO mouse brain slices treated with our vehicle. So far, LTP appears to maintain at around 150% of baseline with GPR18 activation, as compared to maintaining at around 125% of baseline in control experiments. Though more experiments will be required to determine significance, this trend bodes well for further experimentation. 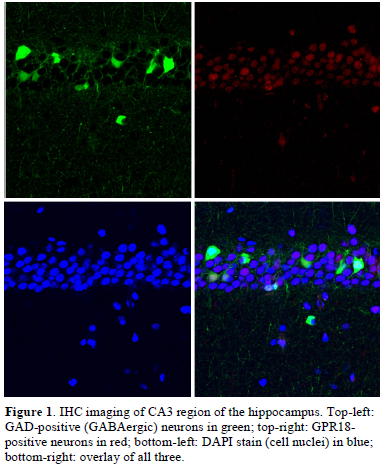 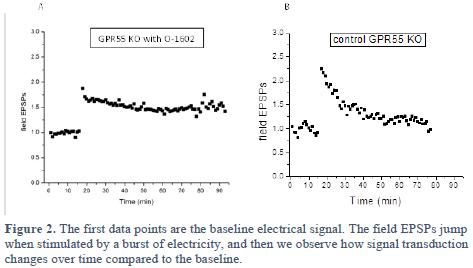 Our experiments have confirmed the presence of GPR18 and GPR119 mRNA in mouse hippocampal tissue, and we have produced images that show the presence of GPR18 in the mouse hippocampus. Because the hippocampus is in the memory center of the brain, the presence of GPR18 and GPR119 mRNA and protein supports our hypothesis that these proteins may play significant roles in learning-related plasticity events and could potentially serve as targets for treating a variety of memory disorders. Though a wide range of experiments must still be performed before any substantial conclusions about the exact involvement of these receptors in synaptic plasticity can be reached, these preliminary findings provide a basis of support for our thesis.