With over 320,000 of our troops returning home with traumatic brain injuries over the course of only six years, brain injuries among U.S. servicemen and servicewomen have become a growing concern. The purpose of this project is to assess the current risks these individuals are facing and to design solutions that provide meaningful protection.

Extensive research was conducted into the epidemiology of traumatic brain injury (abbreviated as TBI) among military personnel deployed abroad. Though the government has long had an extensive program for documenting and reporting injuries, TBI has only recently begun to be recorded and reported. In an effort to address the growing awareness of TBI, the U.S, government, along with several independent agencies, has begun to gather data on TBI and use of current protective gear. The majority of my research builds off of their data and findings.

In addition to more scholarly research, I also conducted hands-on testing of current gear and surveyed active and former members of our armed forces. Service members were asked about their opinion of, and experience with current head protection. I also took extensive notes on construction, materials, and methods used to create this gear.

Based on the information gathered, I then focused on three prevalent areas of concern: Protection, Comfort, and Versatility. All three of these topics appeared to be vital in ensuring the overall safety of the individual. With those goals in mind, I began researching and experimenting with new materials, compositions, and user mentality. I compiled a number of designs and gathered vital details on pain points for users. I began creating prototypes to test ergonomics and validate materials and protective concepts. Every iteration was shown to military personnel, design professionals, engineers, and peers for evaluation.

Research strongly suggested that current head protection is entirely inadequate in mitigating current threats to service members in combat. Current gear is made to outdated specifications and has not evolved with the modern battlefield and medical knowledge.

Internal injury to the head by blast wave, or explosion, is far more prevalent than it has ever been and accounts for the vast majority of serious and lasting wounds. Modern head protection is still primarily constructed to mitigate other threats, such as projectiles, and has actually been proven to enhance the harmful effects of an explosion to the brain 1, even when there is no blunt force trauma involved.

Service members repeatedly reported that gear was heavy, uncomfortable, and retained heat, all of which regularly lead to distraction in life threatening situations, muscle injury, heat exhaustion, and even the removal of gear entirely. These factors resulted in only 63% of service members wearing their protective head gear at the time of their brain injury.

Materials were selected that enhance the comfort and protection level afforded the wearer, while also decreasing the weight and heat retention of the helmet system. These were tested in various compositions and their effectiveness was validated through ballistic and ergonomic testing.

The design and construction of the new helmet system was drastically different from current gear due to its shift in focus. It incorporated several features that enhanced coverage, comfort, situational awareness, and ballistics properties. The helmet system includes a mechanism for absorbing the initial force of an explosion while allowing harmful overpressure from a blast wave to past through the helmet, sparing the user the additional damage current gear causes.

The helmet system was also designed to adapt to a multitude of situations, making it customizable to specific and crucial needs found in the many jobs assigned within the military. The internal shape was also designed to contact the head around its entire circumference, allowing for better distribution of forces and enhanced fit and comfort. The helmet system is capable fitting a wide range of head sizes if needed, by simply adjusting the included padding system.

The final prototype 2 received overwhelmingly good feedback from the military community, and was praised mostly for its additional comfort and enhanced versatility. Many of the designs and materials have been tried and proven effective in different, albeit closely related applications.

Next steps in its implementation would include full standardized ballistic testing and evaluation by government employed agencies and private companies, as well as the sale of designs to an industry participant willing to invest in bringing the design to market. Though these steps are largely beyond my reach and capability as an individual, I am continuing the search for a meaningful application of this project in the real world. It is my opinion that not enough is being done in this area to ensure the safety of the men and women serving this country by risking life and limb. Funds are largely spent elsewhere and the topic in general is only recently gaining awareness, largely due to its emergence in the athletic world.

Invaluable information was gathered and solutions were tried and proven. The project was successful in its goal of breaking away from long-held assumptions about head protection and implementing new methods. The targeted user has so far shown confidence in the innovations made and expressed interest in its implementation. 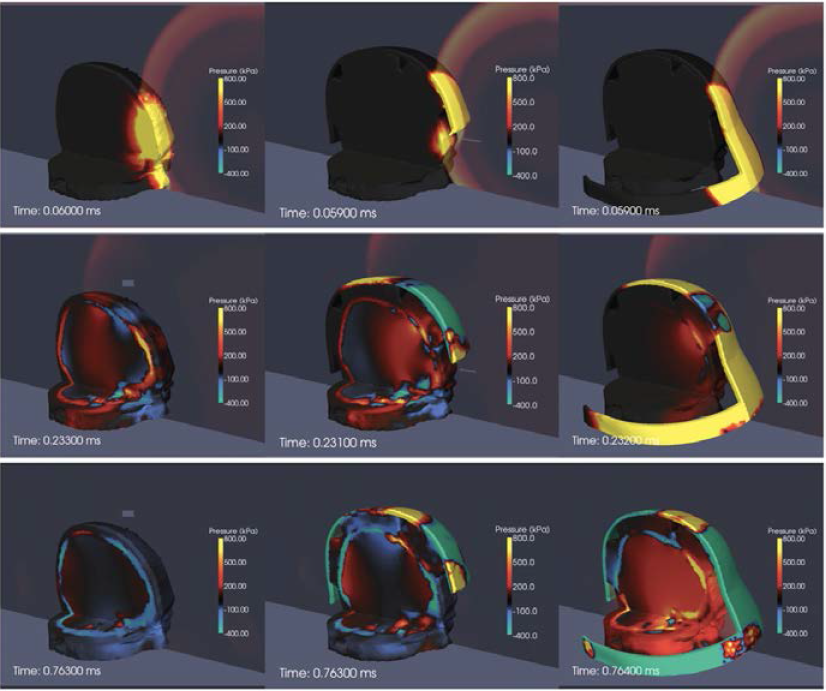 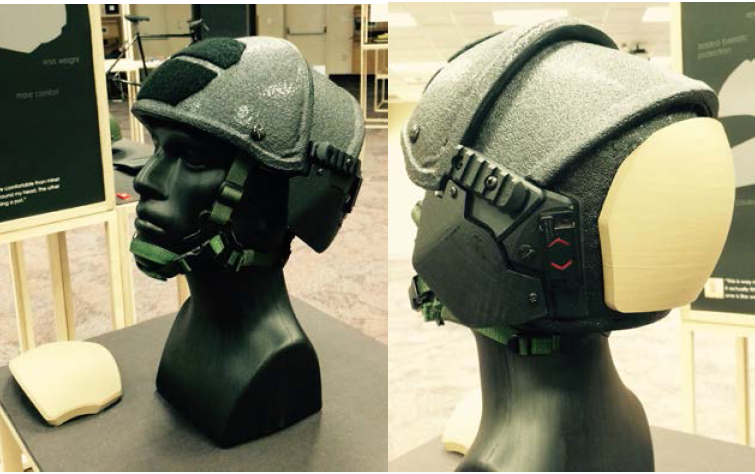