This award led to a wonderful confluence of mentored research experiences for 9 undergraduates and 1 graduate student. The academic goal was to evaluated the role of NSAIDs and general anesthetics in modulating lipid bilayer mechanics, particularly as they influenced pressure area curves and dye absorption rates in purified lipid vesicles. The studies were augmented and informed by molecular dynamics simulations of such molecules being positioned at different levels in the lipid bilayer and measuring the average normal force on the molecules.

Throughout this period, each students met with me weekly in one of five separate lab-group meetings. They presented their results, contemplated roadblocks and goals, and returned to their work. This method seemed to be very effective for exposing young people to scientific methodology in a spiritual environment.

The work done by the students led to their attendance at national meetings and several poster presentations: 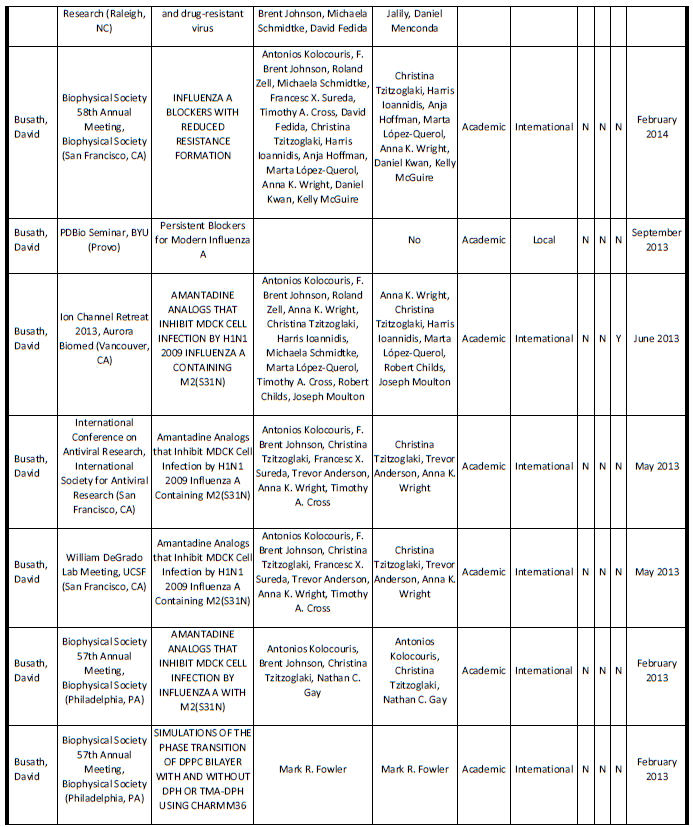 The students that were involved in the project are listed in the 5th column of the table above. In addition, several of the students had the opportunity to publish their data in peer-reviewed scientific articles:

Additional work is still being developed by Jaime Larson, Mark Fowler, Brendan Ashton, and Melanie Grooms, hopeful to result in a comprehensive publication on this project during the next year.

The primary conclusion from the work was that NSAIDs adhere to bilayer and perturb the lateral pressure very well, better than general anesthetics. This may contribute to their effect on inflammation and/or headache though ion-channel modulation.

The budget was spend entirely on student wages and supplies for the research.