Going into this project, it was my intention of complete two separate goals: first, to optimize a learning assay for testing memory and learning in Drosophila melanogaster for future use in the Plant and Wildlife Department laboratory at Brigham Young University, and second, to investigate cyclic AMP (cAMP) levels between two genotypes of Drosophila: wild type and dunce. While I was able to successfully complete my first goal, due to unexpected complications while completing it, the second goal was unable to be completed in time. This experience has taught me that experiments can be difficult to work into a specific period of time because of unforeseen complications and troubleshooting.

The first goal of this project was necessary to prove that there was indeed a discrepancy in the learning ability between the wild type and the dunce flies. This would have given a basis for further study which was where my second goal came in. To test the flies for learning ability, I used a learning assay that had previously been developed and mentioned in a published paper that did a study focused more on memory retention rather than learning between dunce and wild type flies (Ali).

The first challenge that had to be overcome had to do with the learning assay itself, the T-maze. Receiving the initial T-maze was a bit of a struggle as the workshop was a little slow getting the finished product in. During that time, I used white Play-Doh to hold the test tubes together while using a paper to separate the light and dark test tubes. This was rudimentary and ultimately, it was decided the data was unreliable because the data was inconsistent. Flies were also prone to escaping during the test so entire datasets were lost. 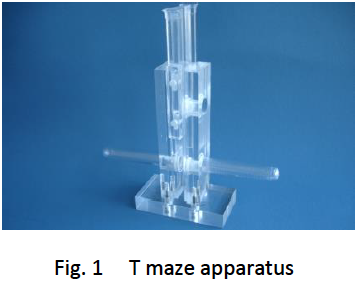 When the first actual T-maze was received, other problems were discovered. During the first run with it, I noticed the flies were not moving towards the light as is in their nature. While investigating possible reasons for this, my professor and I discovered the workshop had used a glue of some kind inside the holes that held the test tubes up to the sliding door mechanism. The glue had a rather foul chemical smell that we assumed was the root cause of the flies avoiding passing over the threshold. We determined the T-maze unusable and had to commission a new one that did not use glue to hold itself together.

About a week after the second commission for a T-maze, was received a new one. This one worked more or less how it was supposed to despite being bulky and the tests moved forward. In an attempt to speed the process along and collect more data at once, my professor and I decided to attempt to test multiple flies at the same time during a single run. This deviated from the Ali paper which only tested a single fly at a time. Instead of spending 30 minutes testing a single fly in a tube, we thought it might be more efficient to test around 10 to 20 flies in a tube at once during that time period.

The tests seemed to be going well in practice, but we noticed that the data itself was all over the place. We were expecting to see the dunce flies perform worse than the wild type flies, but that didn’t seem to be the case with both seeming to perform about the same. At this point, we bagan further trouble shooting to see if we were indeed getting accurate results. Our first attempt was to design a newer, lighter T-maze that would also allow us to run multiple separate tests at the same time. We had also been having issues with the sliding door on our previous T-maze getting stuck and then rapidly closing which often killed our test subjects.

This seemed to streamline our actual protocol, but our data was still all over the place so we ran further troubleshooting tests. We ran through several different variables in order to optimize the assay including: testing female vs. male performance, testing the effect of the time of day on performance, altering the length of time the flies were starved to find the best length of time before testing, normalizing fly age to reduce age influences, and even changing the light sources to find the best performing light. We also decided to minimize our testing pool because we started to notice that flies performed differently in groups and exhibited to a certain degree a “follow the leader” type of behavior that was further skewing our results. We went from testing groups of 10 to 20 flies to only testing one fly at a time just like the source paper did.

In our results, we found that male flies were the most consistent performers due to the high fat reserves present in the female flies that reduced the effectiveness of the starving period. Furthermore, our results seemed to indicate that we reached our optimal test time about four hours after the flies woke up with a three to four hour starving period. This was done in order to avoid test biases favoring “early-bird” or “night-owl” flies affecting the data. Normalizing the ages also cleared up the data because it ensured that we were only testing young adult flies so we didn’t have to worry about the possible effects of aging on fly learning ability. We also found that using Christmas lights as out light source gave the most consistent light. In other tests we tried to use a microscope light that had a dial that made the light intensity vary between tests and occasionally, it was thought that the light intensity altered test results.

In conclusion, we found that the dunce flies do not learn as well and the wild type flies with the wild type averaging around a 75% pass rate, and the dunce averaging under a 60% pass rate. Even though I was unable to complete all of my goals, I did learn several valuable things from the troubleshooting of the T-maze. First and foremost, I learned how to troubleshoot, which is an important skill to have in a real lab setting because, more often than not, any new protocol will require troubleshooting so having those skills will help me in future lab endeavors. I also learned how to adapt a protocol from primary literature into my own lab setting so that I can use it for my own purposes. This has already helped me in several of my lab based classes where I felt like I had a bit of a head start on some of my classmates because I had already learned a little about this skill. This has been a good experience for me, and I’m glad I was able to learn as much as I did.