This project was Intended to provide Insights into refining and enriching of SERVQUAL, an existing service-quality instrument constructed by Parasuranam, Berry, and Zeithaml (1991), with respect to its applicability to (1) a global assessment of service quality and (2) in particular, to the retail sector. The description, objectives, methodology, and research results of the project are described in the following sections.

This project was Intended to examine the service-quality perceptions from a global stand point. For this purpose, the country of Bulgaria was chosen. Bulgarian Consumers (BCs) were to be surveyed and Important service-quality factors underlying a shopping experience in Bulgaria were to be identified.

1 . The 45 years of Communist rule and absence of market-oriented business practices in Bulgaria have conditioned the Bulgarian consumers to accept services of mediocre quality; moreover, the consumers did not have a variety of choices in exercising quality judgement regarding one service or another; and

2 . The present stage of the Bulgarian economic transformation from planned to market-oriented economy carries along a painful impact on the consumers’ purchasing power; because of the limited disposable income at present, consumers have different preferences regarding quality .

The project was expected to help researchers and practitioners working in/with Bulgaria understand the main driving factors In consumers’ perceptions of service quality. Further, the project was to provide Insights that could assist researchers and practitioners in the U.S. increase their awareness of similarities and differences In global environments.

The primary method used in this project was survey research. The data for this survey research were collected as follows: I developed a survey Instrument that asks open-ended questions (asking open ended questions Is a way of eliminating the possibility of excluding some relevant factors that may not be contained in currently available survey instruments.) Then, using the Bulgarian version of the survey, shoppers at three large Bulgarian department stores were asked to fill in the surveys. Because of the survey design, content analysis was used to analyze the data. Because content analysis is a qualitative data analysis technique, multiple data examiners were used to improve the validity of the findings. Therefore, two faculty members cooperated with me on the content analysis part only. Further, they collected similar data in the U.S., and I assisted them with content analysis in their work. As we cooperated, we had an opportunity for comparison between countries, which extended the contribution of the results.

The project revealed several interesting observations. However, due to space constrains, only few of these are hereafter described.

To begin with, several SERVQUAL’s categories turned out not applicable with the Bulgarian survey. Only 16 out of the 22 categories (Exhibit 1 and Exhibit 2 show in graphical and tabulated form, respectively, the applicability of the categories) were mentioned by the BCs. The missing categories included The Store Keeps Promises, Sincere Interest in Solving the Problem, Service Right the First Time, Error-free Records, Tell When Service Will be Performed, and Never Too Busy to Respond to Requests. This observation could be attributed to at least two factors. First, the SERVQUAL instrument was not designed for the type of survey (different industry/field) I performed. And second, the instrument was not designed for the BCs.

A further suggestion of SERVQUAL’s inefficient applicability to a retail survey could be given from looking at the U.S. sample on Exhibit I and Exhibit 2. Here, only 13 categories were mentioned by the U.S. Consumers (U.S.Cs.) The missing categories included Modem Looking Equipment, Employees Neatappearing, Materials Visually Appealing, Sincere Interest in Solving the Problem, Service Right the First Time, Error-free Records, Tell When Service Will be Performed, Gives You Individual Attention, and Convenient Operating Hours. Looking at these categories suggests the smaller applicability of SERVQUAL with the U.S. sample than with the Bulgarian one. A possible explanation could be the level of market development in the two countries. For example, Modem Looking Equipment, Employees Neat-appearing, and Convenient Operating Hours, which are absent with the U.S. sample, are precisely due to market differences.

Another observation suggests, even within SERVQUAL’s applicability, the BCs differ from the U.S.Cs in their perception of service quality. For example, as shown on the top graph of Exhibit 3 (only categories with response result greater than 8 percent are included, as three percentage groups displayed by different bar sizes are considered (8-1 1%, 12-15%, and >16%)), both the BCs and the U.S.Cs are concerned the most with four particular categories; however, these are different for each country. Further, even within the group of mutually shared categories {Willing to Help and Consistently Courteous), a huge difference in magnitude with the latter can be seen. This difference could again be attributed to the less developed/competitive Bulgarian market, where service providers up to the break down of Communism did not consider courtesy as an important service ingredient.

Another observation concerns the presence of several other categories different than those in SERVQUAL. Four categories, as shown on the bottom graph of Exhibit 3, including Value, Price, Look, and Merchandise Availability are the most mentioned (all greater than 13 percent with Price and Look greater than 16 percent) by the BCs. Some of these categories are, as the graph shows, also mentioned by the U.S.Cs, though with different magnitude in some of the categories. What is more interesting, however, is that the U.S.Cs mentioned the most eight categories, or four more than the BCs. Again, this difference could be attributed to the greater sophistication of the U.S. market.

Further observation concerns the Price. As can be seen from the bottom part of Exhibit 3 and Exhibit 4, one third of the respondents (in both countries) considered price to be a significant (probably one of the highest) factor in perceiving the service quality. For the BCs, which complain a lot about unreasonable prices, the price factor seems reasonable considering Bulgaria’s transition to a market system and the economic difficulties accompanying such a transition. However, one would not expect that price will be, or at least not with such a magnitude, a factor with the U .S.Cs because of the competitive U.S. market. Therefore, this finding might suggest no matter what the stage of economic/market development of a particular country/system is, the price would always be incorporated in consumers’ perception system of service quality.

Finally, the Bulgarian survey showed the BCs approach differently the service quality perception regarding experiences in state and private stores. The BCs pay serious attention to what store they are in. If they are in a state store, the BCs have lower service quality expectations and are more tolerant to expectation discrepancies. However, when the BCs shop at private stores, they have higher expectations, and sometimes the BCs experience greater disappointment when those expectations are not met.

Project findings confirmed that SERVQUAL needs modification when applied in a global retail setting. Further, several factors, such as Courteous Employees, Confident Behavior, Value, Price, Look, and Merchandise Availability, turned out to be the driving force in the BCs’ perception of service quality.

In addition, these findings could provide valuable contribution to the efforts of U.S. and other researchers and practitioners to identify important characteristics of the Bulgarian retail market. As an illustration, some of the project findings will be incorporated in an article to be submitted to Journal of Consumer Satisfaction/Dissatisfaction and Complaining Behavior. 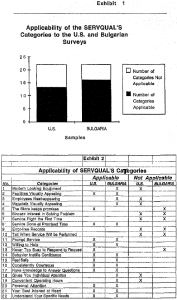 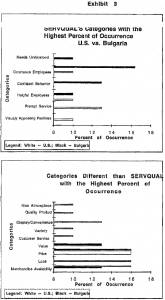 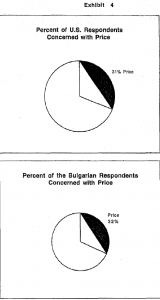