In this study, we analyzed 100 randomly selected Chapter 7 and Chapter 13 bankruptcy cases filed in 2002 in the U.S. Bankruptcy Court of Utah. In addition to these cases, we personally interviewed five local bankruptcy attorneys and court officers addressing the issue of Utah’s high bankruptcy rate. We also researched national statistics and other previous research with the purpose of identifying who in Utah is filing for bankruptcy and what factors are leading to these bankruptcies.

In an effort to understand why Utah is leading the nation in bankruptcy rate, we looked at the factors that make Utah unique. We found that in addition to having a larger average household size than the national average, Utah has the youngest population (median age of 27.1); no other state has a median age below 30. In 1995, per capita income in Utah was $18,054, 76.6% of the national average placing it 45th of the 50 states. Utah ranks fourth-highest in teen labor force participation, fourth in percentage of men in part-time employment and third for part-time women workers, all of which contributes to low per capita incomes. When wages are adjusted for average hours worked, the average hourly wage rate in Utah is 88.2% of the national average. However, Utah ranks eighth in the nation in median household income due to having more earners per household; the three-year average annual income for 1997-99 was $45,257. The cost of living in Utah fluctuates around 95% to 105% of the national average.

Despite the perception that Utah women are less likely to be employed than their counterparts in other states, the female labor force participation rate (62%) is actually higher than the national average (59%) in part due to the young population. However, 36% of Utah women work parttime, as opposed to 27% nationally, and are less likely to have a college degree. While women in the U.S. earn 75% of male wages, Utah women earn 62%, the largest gender gap in the nation. In 2000, the median income for Utah women was $14,140 compared to $28,168 for men. Utah’s unique family profile may be a contributing factor to the state’s high bankruptcy rate. Utah families have low per capita incomes due to high fertility, low wages overall, and more specifically, low wages paid to women.

From the figures gathered in the court cases, interesting commonalities existed among those who filed for bankruptcy relief. We found that 43% of the filers were divorced, separated or single, and that 30% of Utah’s bankruptcies were filed by repeat filers. Despite common belief that Utah’s bankruptcies are a result of large family size, the average family size of those who filed bankruptcy was actually smaller than the national average (figure 1) 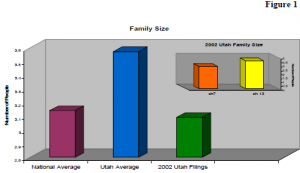 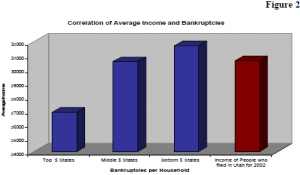 Interviews with local bankruptcy authorities allowed us to obtain more personal information regarding those filing for bankruptcy. We found that the majority of Utah’s bankruptcy filings seem to result from divorce, job loss, unexpected costs, overspending (keeping up with the Joneses), excessive credit card debt, and/or a combination of the foregoing. Large family size and low income does not appear to contribute to Utah’s high bankruptcy rate.