Among economists, there is an ongoing debate as to what factors cause economic growth in developing nations, and what the relative strengths of these factors are. Sachs and Warner published an influential paper in 1995 reporting on a study that found “developing countries with open economies grew by 4.5% a year in the 1970s and 1980s, but those with closed economies grew by only 0.7% a year” (The never-ending question). Adkins et al. find in their research that “increases in economic freedom are associated with improved economic performance in that increases in economic freedom move countries closer to the production frontier” (Adkins, 93). Although other causes of economic growth are less certain, economic freedom is widely accepted to encourage growth in developing nations.

Economic growth itself is often believed to lead to higher quality in environmental conditions in a given country. The Environmental Kuznets Curve is sometimes used to describe this relationship. Developing countries are forced to exploit their environment and cannot afford to protect the environment from pollution as they begin to develop. But as they carry out this exploitation, these developing countries reach a level of income where they are able to afford environmentally friendly production methods and can increase government resources devoted to protection of the environment. At that point, increasing per capita income is associated with an increase in environmental quality (Perkins, 235): 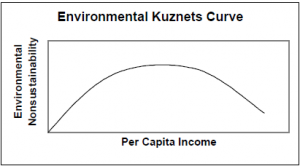 In order to study the effect that economic freedom has on environmental quality, I assumed that a number of variables determine the state of the environment in any given country. As a measure of environmental quality, I used the Environmental Sustainability Index (ESI). In the population sample of 95 countries, selected independent variables that influence the ESI included the growth rate of the gross domestic product (GDP), the log of the gross national income per capita in these countries (LGNI), the percent of the population living in an urban area (URBPER), and the score the country received from the Economic Freedom of the World Index (FREE).

The growth rate of the GDP would indicate how well the country is developing. The GNI per capita indicates that poorer countries might have less industry, and thus produce less polluting waste. On the other hand, poorer countries will also have fewer resources with which they could clean their environments. The percent of the population living in an urban area would be an indication of the amount of industrialization that has taken place in a given country. The freedom index gives an indication of the amount of political and economic freedom a country enjoys.

These statistics indicate that economic freedom does have an important effect on the quality of the environment in any given country. It is interesting to note that economic freedom is the only variable with a positive sign. More freedom leads to a better environment. This relationship could have significant implications for policy makers who know they need to protect their environment. And this result provides proponents of free trade and free market economies with more support in their argument that more freedom has positive outcomes, economically and environmentally.

Surprisingly, a country whose economy is experiencing positive growth has worse environmental sustainability. This result is unexpected, although when the ESI scores of the sample countries are regressed on the GDP growth rate alone, the estimates coefficient is also negative and significant. This could be true because GDP growth rates are higher for developing nations; it makes sense that the higher the amount of growth a country has, the more likely it is that the country is at a stage were it cannot afford to protect its environment. But this does not explain how poorly developing countries with low GDP growth rates can expect to do better environmentally than countries developing well. This suggests that more research needs to be done to determine what cause and effect relationships are taking place.