Antique clothing is a valuable resource and asset to researchers in costuming, clothing, textiles, and historical fields of study. My goal has been to inform the public of the collection and its inherent value, and to extend knowledge of the collection to researchers around the world. In order to accomplish this goal there were many things that had to be done.

The first step was to organize the clothing and designate a place and accession number to each item in the collection. Brigham Young University had a generous donation of over 3,000 items. Because of the enormity of the project, just sifting through the donations took several months. The items that were not suitable for research were donated to various theaters throughout the county. After this sifting process was completed, each item that was kept was placed in an area that contained items of the same century and decade. Then each item was organized within each decade to go into a box that contained similar artifacts of the decade. After this was accomplished the accession numbers needed to be placed on the items. 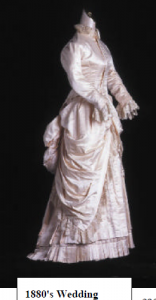 An accession number is what is used by museums to identify the each item. This number is made up of three separate numbers, separated by a period. The first number designates the year the item was donated, the second number identifies the donor, and the third number refers to the item number of the donation. An example of a donation that was made in the year 2002 by a donor who’s number we designated as 98, and was the eleventh item donated, would be: Accession 02.98.11.

After receiving an accession number the item was then catalogued in the computer system with a description of the item next to the accession number and box number. After this rough draft of the collection inventory was made we began taking digital photographs of each item. These photographs are for the inventory system in the computer. The photographs are to make labeling of boxes easier. Each item photographed has the accession number of the item printed on it. After cropping the pictures they are printed and pasted onto the boxes. This is valuable in preserving the items because it enables a researcher to see what is in the box without opening and unpacking the whole box to know if the item is really there. This simple method helps organize the items so that it is not easy to misplace the items.

The preservation of clothing for historical and genealogical purposes is very important. This is why I have been working extensively to get a catalogue published. The catalogue contains professional photographs of some of the most valuable items in the collection. The catalogue is an important asset for many reasons. The catalogue will build knowledge of the research facilities Brigham Young University has, giving more credit to the University. The catalogue 1880’s Wedding Dress.

will be sent to historical museums throughout the world. Another benefit is donors will know the care that is taken of precious items, and be willing to send donations to our museum. Just like any other piece of art, clothing needs to be seen to be appreciated, that is why the catalogue is so important.

The catalogue photographs have been completed after hundreds of hours of work. I am still at this time working on research for each of the items in the catalogue. An example of one of the items in the catalogue is a pocket-watch that belonged to Brigham Young. The only information that we have so far is that he received a watch while on his mission to England. At this point we are verifying whether that is the same watch we have. This watch is a wonderful example of the great sentimental, historical, and genealogical value that items in this collection have. The catalogue will be ready and printed by the end of 2004. I have high expectations for the catalogue’s aid in progression to the collection.

I have been able to pass on to other students the value of these items in the collection. I have done this by aiding in several classes that have come to the collection for research. In teaching these students, many of them have come to respect their ancestors more for the details and work that went into the clothing. Many students were able to do reproductions of items that they could find very little information about anywhere else. For instance, one student was making a maternity dress from the 19th century. At that time pregnancy was very sacred and never mentioned. It was called the period of women’s “unfortunate confinement”. But because of the research facilities here at Brigham Young University’s historical collection, the student was able to find maternity clothing, and make a beautiful reproduction.

As part of my project to expand knowledge of this collection to researchers, I submitted a proposal to the Costume Society of America, to do a presentation at their symposium in April 2004. Not only has this proposal been accepted, but they will be printing the proposal in a program highlighting certain proceedings. This will make Brigham Young University’s collection presentation one of the marked presentations. The Symposium is a marvelous opportunity to teach the value of antique clothing to designers, and make our collection known to researchers.

This collection will continue to expand. It is already growing because of the efforts put into it so far. We are planning to write an article to submit to “Dress” the annual journal of the Costume Society of America, on the historical pieces in the collection, particularly those owned by prominent LDS individuals. Because of the increase of knowledge of the existence and value of the collection, it will continue to develop and contribute to the validity of Brigham Young University’s research facilities. There have been many great accomplishments in publicizing this collection in this year alone. The collection will continue to expand, and gain legitimacy in the researching society. Most important though is that many people have been and will be educated of the historical value of antique clothing.