At this point in time, most BYU animation projects have avoided lip sync. The Industrial Design Department produced a computer animated film called Rupert which had some crude imprecise mouth movements to suggest lip sync, but for the most part every traditionally animated project has tried to do complete pantomime, or use narration. With the undertaking of Lion & the Mouse, accurate lip sync was to be attempted, but as production progressed, students still only tackled the non-speaking scenes in their animations. Thus was my motivation for this project. If the lip sync in Lion & the Mouse was to reach the high expectations of quality set by the existing animated scenes I would need to develop this skill.

Strangely enough, there are few opportunities to animate in the animation major. Most choose to emphasize computer graphics, or story development. So many students have not attempted more traditional animation then is required in their prerequisite class. They don’t have quite enough practice to be comfortable with the extras of acting, lip sync, and drawing at the skill level of others, which are not parts of the beginning class. Also, up to this point a student has not had a time constraint, their animations need not be as planned out, and drawings can be added or subtracted as suits their needs. Lip sync adds this constraint. But actually the apparent difficulties of lip sync are what make it so easy, because once you have the framework of the dialogue, it forces the animator to plan, and good planning makes any challenge much easier.

I found many books and articles relating to approaches and techniques in animating lip sync. Among the most insightfull were Eric Goldberg: Notes on Animation, and in Richard William’s Animation Survival Kit. Especially helpful was a guest lecture given by Randy Haycock. The research I accumulated has been burned to a CD and my faculty mentor has distributed them as needed. These and other sources helped me to adapt my own animation approach to lip sync and a system to apply to my first scene.

I began selecting a simple scene of dialogue for Owen (the mouse in Lion & the Mouse), in which he says after dealing with the Lion, “So, ah, how will I know when you need me?” The first part of this was very technical. I first needed to breakdown the dialogue. Students have access to two programs to perform this task. Sound Breakdown, or MagpiePro. Both are very similar, and have options for automated breakdown, I found that using the automated breakdown required too many manual adjustments in the end, so it was easier for me to do it manually from the start. The principles are the same for both programs; the dialogue is shown as a waveform across a row of columns. Each column represents one frame of film. This piece of dialogue took 42 frames at 24 frames per second. In each column you can assign a picture that represents a specific mouth shape. I had to create each picture to be shown (fig 1); this gives me an idea of how the mouth will look in the dialogue. These are not the images used in the final animation but are only a reference to show where each shape is made in the sequence. I listen to the track and assign shaped based on phonetic sounds rather then correct spelling. The end product is an exposure sheet. Like sheet music allows a musician to know what note to hit at what time, the exposure sheet tells an animator what shape the characters mouth need to hit at certain time.

With exposure sheet in hand I was ready to begin animating. I began not by drawing, but by playing the recording over, and over, and acting out the mouse’s movements in time with the dialogue. I felt rather silly in the room mouthing the words, shifting my gaze, wringing my hands, and shuffling, trying to catch poses that would convey the nervousness of Owen. When I felt I had it down, I quickly roughed out drawing of Owen in those poses (fig 2). At this point I was not concerned with mouth shape but with acting. I assigned my key poses to frames in the pencil test software by playing them alongside the recorded dialogue. I then worked out the rest of my timing, drew the key frames I felt I was missing, and did the inbetweens. I now had an animation that was acting wise, in sync with the dialogue. I took the final stack of drawings and using my exposure sheet, put the correct mouth shapes on the corresponding frames. The final result was a speaking, acting mouse. I was able to complete 2 more scenes with Owen before the film was put on hold to fix some story problems. Since then, two of the three scenes I animated have been cut from the film. Production will resume full force this winter.

Where I have gained the most from this project is in my position as assistant director of Lion & the Mouse, and as director of another student film titled Faux Paw. I’ve personally sat down with nine students and showed them how to use MagpiePro. Between the ten of us, the dialogue has now been broken down entirely for both films. This is the first time any of the animators on Faux Paw have had to do lip sync. They have had the same trepidation at the beginning that is experienced by most animators. But through my experience I show them that the areas that intimidate the beginning animator in attempting lip sync are actually the things that make it easy. I’m very pleased with the work the students have produced for this film. 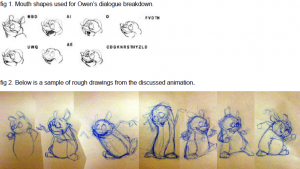