This study explored the effects of light stimulation on the baseline levels of dopamine (DA) in the Nucleus Accumbens (NAc). DA is a neurotransmitter used in neuronal communication in the central nervous system (CNS) and is the primary signal molecule of the NAc. The high levels of DA in the NAc have been shown to be integral in reinforcing behavior and in addiction. High levels of DA are released in the shell of the NAc during naturally rewarding activities and an enhanced sense of well-being. Addictive substances have been shown to elevate DA levels beyond natural levels, increasing the perceived reward of consuming the substance. Addicts have been shown to have disregulated DA levels. Their neurons eventually adapt to elevated DA levels, resulting reduced responsiveness to DA in the short term, and in reduced DA levels in the long term. The results in the depression associated with drug withdrawal. Greater stimulation becomes necessary to achieve the same level of reward as before. This results in an enhanced drive to return to drug using behavior and is one of the primary forces a recovering addict faces during withdrawal (Di Chiara & Bassareo, 2007). Traditional addiction treatment methods do not address this issue. Light stimulation was studied as a way of increasing tonic levels of DA in the NAc as a means of correcting this deficiency. Previous studies have utilized low energy lasers as an adjunct treatment for alcoholics (Zalewska-Kaszubska & Obzejta, 2004) and for morphine dependent rats (Mirzaii-Dizgah, Ojaghi, Sadeghipour-Roodsari, Karimian, & Sohanaki, 2009). The results of both studies indicated that light had a beneficial effect but little was understood about the neurological effects of these treatments. This study explored these effects by observing the changes in baseline levels of DA in the NAc upon exposure to light.

Adult, male rats were used in this study. They are considered model organisms for studies on the brain pertinent brain centers.

There were two test groups. Each group was composed of five test subjects. Each subject was anaesthetized using isoflurane and immobilized. Control recordings were taken from each subject to determine the baseline levels of DA in the NAc before treatment. After these levels were determined, subjects were then administered ethanol at 2 grams per kilogram of body weight through intraperitoneal injection. Subjects were then randomly assigned to one of the two experimental groups and then exposed to either red light or blue light pulsed at 25 Hz for 30 minutes through whole head stimulation via a fiber optic cable. Data was collected during this time to determine the acute levels of DA in the NAc during treatment. These levels were then compared to the control values taken previously.

A stimulating electrode (StE) was inserted in the medial forebrain bundle (MFB), while a carbon fiber electrode (CFE) was inserted into the NAc. Data was recorded using Fast Scan Cyclic Voltammetry (FSCV), an electrochemical method used to measure the relative concentrations of chemicals such as DA and serotonin. Electrically active compounds are oxidized and reduced at specific voltages. The concentration of a specific compound can be deduced as the voltage of the solution is changed by measuring the change in electrical current of a solution. Electrical stimulation was applied to the MFB to stimulate the release of DA, while a triangular waveform was applied to the CFE (which oxidized DA to dopamine-o-quinone). The change in current was then monitored in vivo to determine the concentration of DA present. The computer program, Demon Voltammetry, will be used to record and analyze this data. The light was administered using DMX USB-controlled LED RGB illuminators controlled by LabVIEW software.

The experimental group exposed to 2 grams of EtOH per kilogram of body weight and pulsed blue light for 30 minutes experienced an acute 50% reduction in DA transmission in the NAc.

The experimental group exposed to 2 grams of EtOH per kilogram of body weight and pulsed red light for 30 minutes did not experience a significant reduction in DA transmission in the NAc. 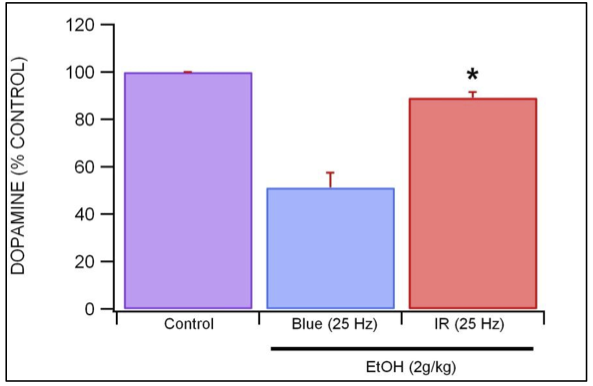 The results from this study indicate whole head stimulation with red light results in the attenuation of acute EtOH inhibition of DA transmission in the NAc. Blue light does not affect the DA transmission positively. These results indicate red light could be used to alleviate the depression of DA transmission, by stimulating the release of DA to physiologically normal levels. It is recommended that further research be conducted to determine the exact cellular mechanisms by which this change is elicited, as well as the specific neurons in the NAc that are stimulated by light.