The lives of famous artists in every genre are dissected again and again. What inspires them to create extraordinary works of art such as the Mona Lisa, Pablo Picasso’s Guernica, and the operas of Mozart? Popular psychology commonly links genius with various forms of mental and physical ailments. To what extent, if at all, does an illness help to inspire an artist? I chose to analyze the life and compositions of Robert Schumann to see if physical and mental illness impacted his musical compositions in both number and in style. After a review of literature, biographies, compositions, analysis of composition, medical literature, and a review of the DSM-IV, I graphed a time line of his life correlated with his music compositions and illness (Fig. 1).

Robert Schumann, German composer and music critic of the Romantic Era, battled with bouts of depression throughout his life. Tragically, after attempting suicide, he was committed to a mental institution, where he lived out the last year and half of his life. It is difficult to measure the affects of his depression on his life and music. Evidence strongly suggests depression and other ailments affected Robert Schumann’s music.

While biographers agree Schumann suffered from depression, many complications arise when attempting to label him with a specific diagnosis. Major depression has a beginning, middle, and an end while chronic depression is a low-grade form often lasting throughout a person’s lifetime. A person can have both chronic and major depression simultaneously. Manic-depression consists of mania, periods of extreme elation and productivity, followed by extreme depression.

Studies of Schumann’s life suggest he suffered from bi-polar disorder or chronic depression with episodes of super-imposing major depression. He conceived many of his compositions within a short period of time as seen in the Kreisleriana written in 1838 and drafted in about four days.1 Following the bursts of inspiration he would suffer from depression. Months later he would pick up the draft and edit the piece. This pattern continues throughout Schumann’s life and plays itself out in a very cyclic manner. Similar to the cycles experienced by a manic-depressive or a person with reoccurring major depression with chronic depression.

Other factors serve to confuse the issue further. The German Romantic Era personified the philosophy of Welt-Smerz, (German for “world grief”). The artistic ideal consisted of preoccupation with suicide, moodiness, and intense creativity. Schumann possibly contracted Syphilis during his early adulthood. In the tertiary stage, the brain may be severely affected resulting in madness. In October of 1833, Schumann suffered from an episode of Major Depression. Several events preceded his depression. He started work on a Symphony, that summer he contracted malaria, his brother Julius died of tuberculosis, and then in October his favorite sister-in-law fell victim to malaria.

Schumann also drank heavily during his law school days and throughout his twenties. An injury to his hand also complicated the issue by preventing him from pursuing a career as a piano virtuoso.2 The Schumann family history is marked with evidence of depression and serious  physical ailments. His parents, August and Johanna suffered from depression. August died following a nervous breakdown of some kind when Schumann was fifteen, in 1825. Emilie, an older sister, most likely committed suicide. A cousin of Robert’s paternal grandfather also ended his own life. All of Schumann’s sons suffered from serious health problems ranging from mental illness to tuberculosis.2

What is the compatibility of the creative arts and depression? Evidence supports a correlation between the two. All artists use their art to channel emotions and relieve stress. The list of artists with documented mental illness include Ernest Heminingway, Vincent van Gogh, W.A. Mozart, and many more. Robert Schumann portrayed experiences and emotions from his own life within his music.

Robert Schumann composed beautiful pieces in almost every musical form during his time. His wife Clara Wieck, the daughter of his piano teacher and an established piano virtuoso, became Robert’s support through the years preceding his hospitalization. Despite many obstacles Schumann created music of great depth and beauty. It is impossible to define what manner depression, illness, events, and other possible diagnoses affected his music. However; if the events shaping Robert Schumann’s life took a different course, then his music would have been entirely different. He possessed an ability to portray his emotions through music, and in all probability the cyclical depression and mania influenced his compositions. 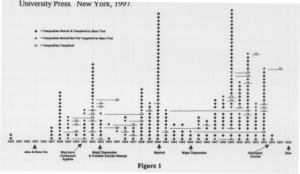