The purpose of this report is to give the results of research conducted to measure the extent of internal curing occurring in the field in concrete bridge decks constructed using lightweight concrete compared to conventional concrete. With permission from bridge engineers at the Utah Department of Transportation and in cooperation with personnel at Provo River Constructors and Raba Kistner Infrastructure, Inc., we used sensors donated by Decagon Devices to monitor moisture content, temperature, and electrical conductivity in four bridge decks located in Utah County along the I-15 corridor: 400 South, 400 North, 800 North, and Geneva Road. The bridge decks at 800 North and Geneva Road were constructed using lightweight concrete, while the bridge decks at 400 South and 400 North were constructed using conventional concrete.

Lightweight concrete uses expanded shale aggregate instead of limestone aggregate used in conventional concrete. Expanded shale aggregate absorbs about 10 times more water than conventional aggregate. For lightweight concrete bridge construction, the smaller particles of the shale aggregate (fines) are soaked in water before construction. The extra water contained in the fines is used to prolong the curing phase of the concrete and increase hydration of the cement. The extended curing is called “internal curing” because the water used to extend the curing comes from inside the fine aggregates. Full curing and increased hydration lead to greater strength in the concrete and may provide greater resistance to chloride ingress.

Resistance to chloride ingress is desirable because corrosion of reinforcing steel in bridge decks is caused by the diffusion of chloride ions from deicing salts into the concrete. When the reinforcing steel corrodes, rusting occurs; rust expands to 5-7 times the size of the original steel, causing the concrete to delaminate and crack, leading to failure of the bridge deck.

The temperature of the deck does not directly affect internal curing; however, we wanted to be sure that lightweight and conventional concrete are comparable in this area. Figure 2 graphs the temperature data (averaging the values from the two sensors) from each bridge deck according to the date the values were retrieved. We can see that there are no major differences in temperature between lightweight and conventional concrete. 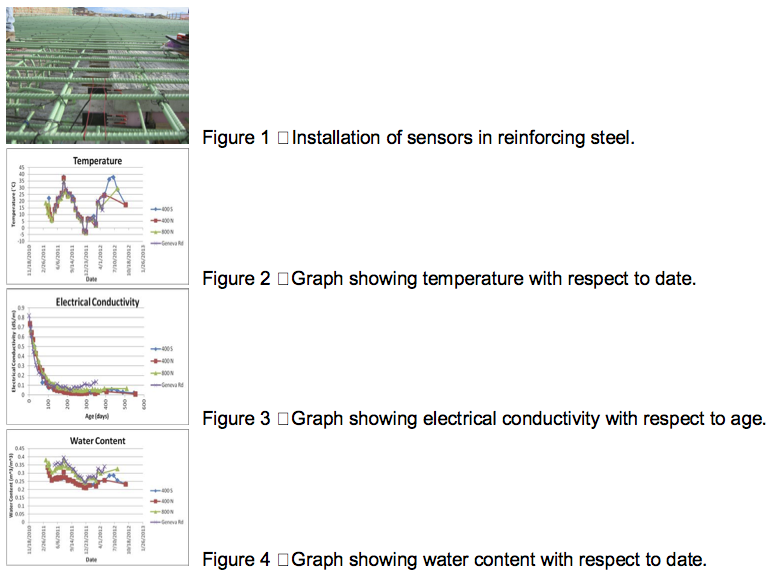