Full-Depth Reclamation (FDR) in conjunction with stabilization is becoming an increasingly popular method for flexible pavement reconstruction. FDR can be more economically and environmentally friendly than excavation and replacement; however successful reconstruction greatly depends on the stabilization method employed, base material properties, and site conditions.

The project from which this research was derived occurred in October of 2010, when a failed section of flexible pavement in Salt Lake City, Utah, was reconstructed using FDR in conjunction with asphalt emulsion treatment, as shown in Figure 1. The project specifications required milling the existing asphalt layer, pulverization and blending of the remaining asphalt with the underlying base material, and treatment of the base blend with 4 percent asphalt emulsion. Following compaction, the emulsion-treated base (ETB) layer was left unpaved to ideally facilitate water evaporation, breaking of the emulsion, and strengthening of the ETB. However, as a result of comparatively low temperature and high relative humidity values typical of fall weather in Utah, evaporation of water was greatly diminished, and the ETB layer retained a high moisture content. The emulsion would therefore not break as required, and significant rutting was occurring under construction trafficking. The engineer and the contractor both recognized that the environmental conditions were not likely to improve, and, after lengthy discussion, they decided to remove and replace the ETB layer.

Although this approach was considered low risk and could be quickly implemented without additional, time-consuming materials testing, it was certainly among the more expensive options available for the project. A much less expensive option that was also discussed involved blending of portland cement into the failing ETB. The basis for this recommendation was that portland cement would provide rapid strength gain as it hydrated and, by reacting with the water in the ETB, also help the emulsion break, which could add further strength. Therefore the first purpose of this research was to evaluate a more economic alternative of adding small quantities of cement to an overly-wet ETB within the days following emulsion injection. Thus the strength gain of ETB could be compared to samples that were treated with emulsion then later treated with cement (C/ETB). The second purpose of this research was to quantify synergistic effects between cement and emulsion stabilization. This was done through comparison of ETB and C/ETB samples to a third set of samples that were treated with cement but not emulsion (CTB).

Specimens of all three treatments were created either in the field or in the lab and strength gain was evaluated by measuring the unconfined compressive strength (UCS) over time. Emulsion injection was performed on site and 30 ETB samples were prepared to be UCS tested at 7, 28, and 181 days (6 months) following compaction. When it was decided that the site was to be excavated, material was collected and transported to the BYU Materials and Pavements Laboratory for further testing. Cement treatment of emulsion-treated material was conducted in the lab and two variants were investigated: delay time and cement content. Cement at either 2 or 4 percent by weight of dry aggregate was added after either 5 or 10 days of delay. Thus time between emulsion and cement treatment was investigated, as well as the percentage of cement that would improve the characteristics of emulsion-treatment.

The data resulting from the comparison of specimens with these three treatments are shown in Figure 2. These results show that while cement can improve the strength gain of previously emulsion-treated material, the rate of strength gain is not as great as if there were no emulsion present. The Portland Cement Association recommends adding sufficient cement to achieve a target 7-day UCS between 300 and 400 psi1. The only specimens that achieve that level of strength are those stabilized with 4 percent cement and no emulsion. In this project, asphalt emulsion acted more as a lubricant than a stabilizer in all cases, as the UCS was lower for all samples that contained emulsion than corresponding samples that did not contain emulsion.

The optimal base stabilizer in this case was 4 percent cement without emulsion, but if the emulsion has already been added to the base layer, stabilization with more than 4 percent cement is recommended in order to reach the recommended strength. It can be concluded that strengthening ETB with cement is a viable solution and is more cost-effective than excavation and replacement when an emulsion treated base is not exhibiting signs of curing within the first few days after treatment. 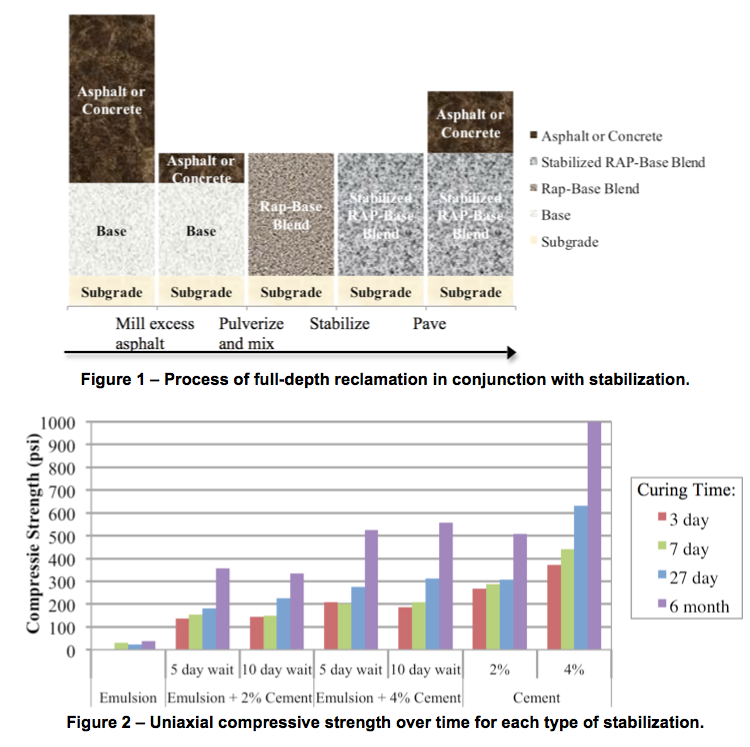