Success in calculus can have significant implications both within an intended field of study and throughout academic pursuits. Of the 34 science, technology, engineering, and mathematics (STEM) majors at BYU, 25 of them require calculus for graduation and 20 of them require it as a prerequisite for other courses. A study at Bryant University in Rhode Island examined mathematics SAT scores, verbal SAT scores, percentile rank in high school graduating class, percentage score on a college mathematics placement exam, and calculus grades of actuarial students; it was found that the calculus grades were the “single best predictor of a student’s postcalculus grade point average” (Smith & Schumacher, 2005).

Unfortunately, on average 41.7% of students nationally fail calculus (Treisman, 1992, p. 369), and it can frequently take almost two years to complete the standard first year college calculus sequence (Bonsangue, 1994). While developing a teaching assistant training program at UC Berkeley in 1974, Uri Treisman began studying the disproportionately high failure rates of minority students; as a result of this analysis, an “anti-remedial” workshop course was developed. It was designed around problem sets which were carefully chosen to drive group interaction, and targeted groups of students who had historically not done well in calculus despite a strong academic history. The workshop was designed to supplement the regular course, with participants completing the same homework and tests as non-workshop students. Treisman’s program, and those modeled after it, frequently experience phenomenal success (Tresiman, 1992). At the University of Kentucky, the average calculus grade of students in the program was always higher than that of students not in the program, and during 44% of the first sixteen semesters the program was run, the difference was a full letter grade higher or more (Freeman, 1998). At UC Berkeley, students in the program took an average of 3.63 quarters to complete the 3 quarter calculus sequence, as compared to the 4.64 semesters (on average) taken by students targeted for inclusion in the workshop, but who chose not to participate (Bonsangue 1994).

At BYU, throughout most majors there is a consistent and disproportionate drop in the numbers of female students in their senior year of studies at BYU, as compared to male students in that year. Much of this drop may be explained by the large number of female students who choose to leave school to marry, start a family, or work so that their husbands can complete school. However, in science and engineering fields, the largest drop in proportion of female students occurs between the freshman and sophomore years (BYU OIT 2007). For the Calculus Excel ORCA research, a survey was designed to measure the frequency at which academically well prepared female STEM majors changed their major after calculus, because of their experience in calculus. Indicators of strong academic preparation included 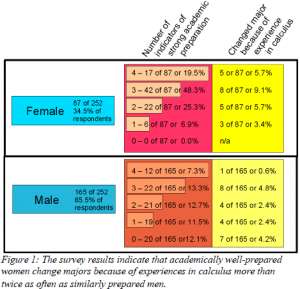 Assessment measures can now be designed in detail so that the effectiveness of a Calculus Excel program at BYU can be determined. Such measures might include a calculation of the average number of semesters taken for students to complete the first year calculus when they participate in the program, vs when they do not participate, and students in the program should be tracked to determine if they are still in STEM majors or fields three years after completion of the program.