As suggested by the title, this project focused on understanding the Cognitive Patterns of Information Addiction. Throughout the course of the project we have learned quite a bit about this concept and have refined our narrow focus on addiction to a more broad focus on understanding the cognitive patterns associated with information processing of social media. While we have made certain discoveries, this project has really just laid the initial ground work for this research stream. Students have been instrumental in creating experimental instruments, conducting literature reviews, designing experiments, and collecting data. We have presented these ideas at some of our discipline’s top conferences and the community finds the ideas interesting. We also submitted our initial experiment to a top IS journal (Journal of MIS) and though we received mixed reviews, we received useful feedback that has led to additional data collection and we are hopeful to submit this manuscript to another top IS journal in early 2019. Without the funding for this MEG, we wouldn’t have been able to conduct this research.

Never in the history of the world has the general population had greater access to information than it does today. Technological advances allow greater, more frequent, customized and personalized information streams that deluge individuals across all demographics of society. While there are numerous benefits that accompany these advances, there are also very real negative consequences. Every day we are flooded with information that can be personally relevant but often is just “informational candy,” providing little or no sustenance to our well-being. In many ways, due to this flood of information, we have become a mentally obese society[1]. We assert that human thought processes are impacted and tailored by the type of information that is presented and the perceived rewards associated with that information. Our research investigates human desire for information and the neural responses we experience when receiving certain types of information.

The main academic contribution from this project is the result of an fMRI study that we conducted that looked at the “The Neurocognitive Effects of Hedonic Information Consumption.” The abstract follows:

Hedonic information consumption (HIC) refers to the consumption of information for non-task-oriented purposes such as entertainment or pleasure. With the explosive growth of information availability through online channels such as social media, HIC has become a widely observed and growing phenomenon; however; most IS research to-date has focused on factors surrounding information consumption for utilitarian rather than hedonic purposes. In this paper, we take an initial step to inform theory in this area by applying a NeuroIS lens to explore HIC behavior. We postulate that certain characteristics of the information involved in HIC, namely its novelty and valence, play a role in determining the neurobiological reactions that take place during HIC. We report the results of an fMRI experiment designed to measure neurocognitive responses to these information dimensions in the context of a popular social media platform. Our results provide preliminary evidence for differential processing patterns related to novelty and valence that can inform ongoing theory building surrounding HIC behaviors.

Our results provide preliminary support that information novelty may be associated with activation in brain areas known to receive projections from the dopaminergic rewards system. Specifically, we observed that novelty was associated with greater interactions in the left midbrain and the hippocampus.

However, we expected findings to be even stronger and throughout more areas of the rewards processing system. One potential explanation for the lack of a stronger dopaminergic response to the novel condition could be due to the “wanting” vs. “liking” distinction observed by neuroscience researchers. The essence of this distinction is that different neural systems are responsible for our desire for a reward (wanting) and the actual hedonic impact of experiencing the reward (liking). Thus, one important and promising extension of our work for IS theory is to explore how alternate experimental designs that induce novel information seeking may elicit neural responses that are distinguishable from those we observed for novel information consumption.

Outcomes we observed for familiar information also carry implications for theory. Results for our second hypothesis, based on a whole brain analysis, showed greater activation across 13 brain regions for familiar stimuli compared to novel stimuli. Several of these brain areas correspond to the parietal memory network and are indicative that participants consciously or subconsciously recognized stimuli as familiar. Worthy of note is that the PMN has some overlap with the default network, which is activated when a person becomes bored, introspective, or attends to other things.

This seems to suggest that repetitive or familiar information, even with minor syntactic differences, may not hold our attention for long – even retweets of interesting or important events can quickly become old news.

Logically, because HIC entails deriving intrinsic gratification from information consumption, it follows that people engaged in HIC should attend more to information they believe is salient as opposed to that which they deem insignificant. Our results suggest that positive information may stand out more than negative or valence-neutral information, and thus may be a more likely target for HIC behaviors.

We were able to present early ideas of the project including some preliminary results at the America’s Conference of Information Systems (AMCIS 2017). This included an overview of our experiment and initial data collection efforts.

After the conference we wrote a full length manuscript and submitted that to the Journal of MIS. We submitted in March 2018 and received reviews at the end of May/early June. Although the manuscript received mixed reviews, the reviews provided useful feedback that would help to strengthen the theory behind our work. This required an additional data collection including a new experimental instrument that could be used to collect the data and validate the main constructs we were investigating. This experimental instrument was built out during Fall of 2018 and data was collected at the end of the semester. Data analysis is underway and we believe will support our earlier findings.

In addition to the main research focus, the MEG grant has created additional related papers that are at different stages. These are briefly described below:

o  This is a student led project related to how consumption and production patterns vary across individuals as they use social media. The literature review has been completed, the experimental instrument developed, and the IRB completed. Data collection will occur in January-February 2019.

o   Building on previous research, including work in our research stream, the cognitive rewards associated with information may not occur just because of the information itself, rather in reaction to the anticipation of the information. This fMRI experiment will test the anticipatory reaction to social media cues compared to other informational cues. The literature search has been conducted and the experimental stimuli collected. The experimental instrument is underway. It is anticipated that we will collect data in March-April 2019.

We believe that they academic objectives of the project were met. The research was presented at a couple of difference top conferences, a manuscript was written and is in the process of being refined, a couple of other manuscripts are under way. In that regard, the project has been successful.

Three different students have been directly involved in these projects. They have worked to develop the ideas behind the research, conducted extensive literature reviews, developed experimental instruments, written initial IRB applications, and will be helping to collect and analyze data. 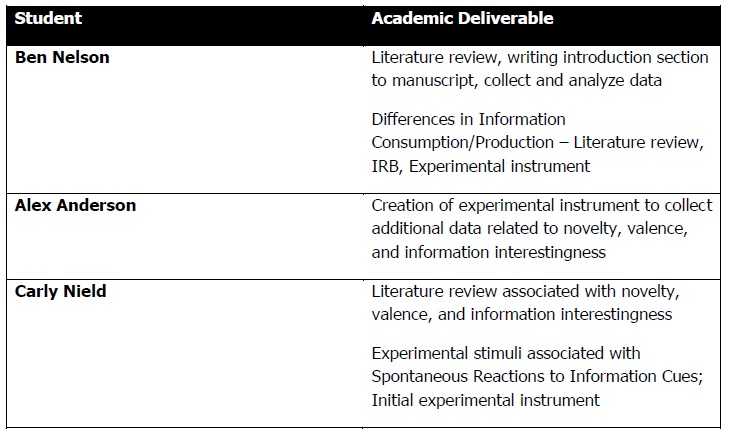 We have embraced the primary principles of mentorship mentioned on the ORCA site. We have 1) developed personal and professional relationships with the students, 2) provided an upclose and realistic view of academic scholarship, 3) seen the students growth with new skills and knowledge, 4) have had discussions with these students related to the integration of spiritual and secular aspects of the concepts we were exploring, and 5) helped provide experiences that we believe are pertinent to students’ future discipline.

We believe that the skills that students acquired during this mentored experience has better prepared them as Information Systems professionals specifically, and management professionals more generally.

The MEG budget was spent in the following way. As you can see, the majority of the funds were allocated to fMRI scan time. Additional data collection related to this project will continue in early 2019. Conference travel occurred in August 2017 and January 2019. Actual amounts include these figures.

In conclusion, we believe that this MEG funding has provided a great mentoring and research experience for everyone that has participated on the team and on the project. Students have been exposed to top tier Information Systems research and have been instrumental in developing the research stream.