In January 2017 I received a MEG totaling $20,000 to conduct a multi-faceted project associated with the excavations at Khirbat Ataruz in Jordan, including capturing images of ancient artefacts and inscriptions using Reflectance Transformation Imaging (RTI). I am happy to report that the project was a success, and that we were able to include and train 6 BYU undergraduate students to participate in the excavations, two of which were trained and assisted in our imaging work. The following students were involved in the project: 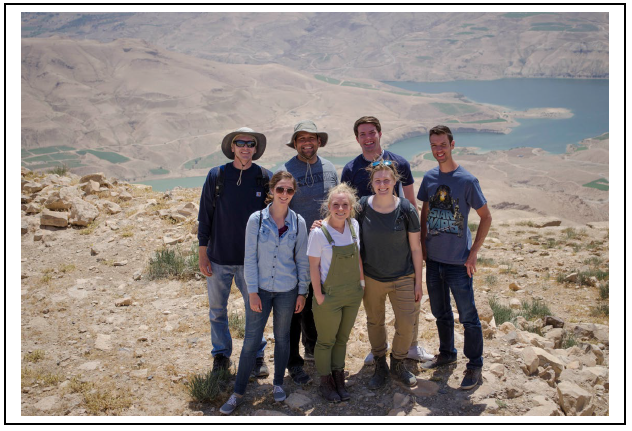 Prior to our departure, we had a series of training meetings wherein we discussed cultural sensitivity, logistics of the dig, as well as the history and archaeology of the site. Students were additionally assigned readings from the EXCAVATION MANUAL: MADABA PLAINS PROJECT (revised 2011 version) that would enable them to become familiar with the archaeological methodologies we would be using when we arrived in Jordan, along with articles written about the site and the history and archaeology of the region. This preliminary training enabled us to hit the ground with a solid basis of the techniques we would be applying in the course of the dig.

Upon arrival, we were able to work closely with the students to train them in the techniques we had learned about through our readings. In the course of the archaeological filed school, we could literally work from the ground down with excavation preps, demonstrating and executing square setup, how to take, read, and record soil samples, how to detect, document, and record objects and finds, explain and practice proper excavation techniques, as well as learning to interpret the architectural features and artefacts we were discovering. The Director and I interacted regularly to assist, explain, and ensure that students were properly learning the techniques and to discuss various avenues of interpretation as to what the students thought they were encountering. This enabled them to be analytical in arranging the data in a way that would make sense and encourage them to present a plausible scenario in efforts of formulating conclusions. I believe the mentoring environment was a success, and we were additionally able to spend time daily getting to know and interacting with our students on a personal level.

Our students were given leadership responsibilities to oversee the work in their squares, which included 2-3 Jordanian workers from the local Beni-Hamida tribe. As we excavated, we were able to discuss, explain, and place an historical context to the site and the material they were working with and discovering, as well as work through theories about the architectural features they were excavating and their relationship with the Iron Age temple complex situated upon the acropolis. We thus began to ascertain a connection between the two, and we began witnessing the development of a Moabite cultural context evolving at the site in the decades subsequent to King Mesha’s conquest of Ataruz.

Additionally, we were granted permission to examine and RTI Moabite figurines, decorated pottery, statuettes, and inscriptional material discovered at Ataruz that are now currently housed in the Madaba Museum. Two of our students took a leading role in this endeavor as we provided training for the setup and execution of the imaging of these ancient artefacts. Other students were able to produce high-quality drawings of the images and of the architectural features of the site. Many images and drawings that our BYU students were able to produce will be used in a future monograph and articles about Ataruz that we hope will be completed in 2020.

We have already begun presenting some of our findings from our excavations and are working on two articles that we hope to submit by the end of 2019:

• Ji, C. and Schade, A. “Khirbat Ataruz in the Late Iron IIB and Iron IIC Periods: Synthesizing 15-Years of Archaeological Excavation Findings,” paper accepted for presentation at the 14th International Conference on the History and Archaeology of Jordan, Florence, Italy, January 2019.

• Ji, C. and Schade, A. “A Preliminary Report of the 2016-17 Seasons of Khirbat Ataruz Excavations,” to be submitted to the Annual of the Department of Antiquities of Jordan.

• Ji, C. and Schade, A. “A Monumental Staircase of the Ataruz Temple?: Excavating Field G at Khirbat Ataruz,” to be submitted to Andrews University Seminary Studies.

Additionally, we were granted permission to RTI Northwest Semitic inscriptions at the Louvre Museum in Paris on the way home. I was able to take two students with me into the museum where we worked to capture images that would enable us to examine objects and texts from new perspectives afforded by the RTI technology. This endeavor was difficult, as the process was time consuming, the lighting and spatial conditions were extremely difficult to work with, and working next to windows, we battled shifting lighting conditions with the movement of the sun. However, we are working to process all these images and hope that they will enable us to create some significant photos to be used in future publications.

Our students have played an important role in our project, and in the course of the dig the students were able to achieve and develop the following skills well:

• Methodology and application of archaeological techniques

• Familiarity with the history and textual evidence of Jordan

• Experience in the field

• Leadership opportunities and overseeing the work of a team

• Familiarity with site reports and the procedures of a dig

• Interaction and care for ancient artifacts

• Exposure to museums and archaeological sites, and how they operate

Along with valuable experiences gained through the fieldwork of the archaeological excavation, BYU participants also enjoyed an immersion into the Islamic and Arab Christian cultures. I believe one of the highlights for all of the students participating in the project, was working alongside local Jordanians and with universities of other faiths (including students from La Sierra University in California and a graduate student from Korea). BYU participants were able to develop an awareness and appreciation for cultural and religious diversity, and create friendships and comradery that will always be remembered and cherished.

Some of the most significant lessons that students have expressed that they have learned is how much they have come to love and admire Muslims and their faith. They have come to understand how loving, kind, and generous Muslims are, and how good-natured and humble they act in all they do.

Travel expenses: Airfare to Jordan and return to SLC with and a stop in Paris (airfare – $2,000; hotel, meals, museum – $200) on the return trip to visit the Louvre and view the Mesha Inscription and RTI Northwest Semitic inscriptions. $2,200 per student = total $13,200 (The additional costs were covered by an RSC grant and the generous support from experiential learning monies provided by the Department of Ancient Scripture).

The additional $5000 from the MEG was used to help cover these costs.

I would like to personally express my appreciation and gratitude for receiving the MEG and for the opportunity to participate in this mentoring program. Our students have truly been blessed with these experiences thanks to the monies afforded in the grant. What our students learned by participating in this project will enable them to continue personal and professional growth as they apply the knowledge and skills they have learned through the process, and prepare them for their future with a new perspective and appreciation for the peoples and cultures in that region of the world.