Tol is one of the languages belonging to the language family referred to as Jicaquean in the linguistic literature. It has roughly 200 speakers remaining in a single community in northern Honduras, called Montaña de la Flor. Some relatively recent grammatical descriptions of the language provide useful but incomplete information on the grammatical principles of Tol (Holt, 1999; Dennis, 1992; Dennis & Dennis, 1983), and they contradict each other. The need for a correct understanding of Tol is increased by the fact that Tol is an endangered language. Additionally, it is currently a language isolate and is not similar to any other living language, and is primarily a spoken language only, leaving it more likely to die in the near future. This is not only a loss of a language, but a loss of culture, stories, and unique ideologies and values. A correct understanding of the distinctive sounds of Tol leads to the ability to create a writing system and grammar materials to distribute to the Tol speaking community for language preservation. The community of speakers is very engaged in language revitalization and has requested language materials. This study aimed to provide information about the phonetic and phonological structure necessary for the creation of future materials.

Holt provided one comprehensive grammar material, including an impressionistic phonetic analysis (1999, p. 9-18), but it lacks a quantitative phonetic acoustic analysis. He also provided a list of what he believed were the distinctive sounds (phonemes) and stress patterns of Tol. However, these hypotheses contradict opinions in other studies of Tol. In our study, we aimed to address Holt’s findings from a quantitative perspective in order to determine the validity of his claims. We primarily addressed three things: the distinctive consonants of Tol, the distinctive vowels of Tol, and the general stress patterns of Tol.

The data represents 20 native Tol speakers over seven different recordings. Six of the recordings were recorded by Steffen (2007), and the last recording was recorded by Rogers in in the summer of 2017. Data was taken from the recordings using Praat and ELAN, two software packages for the scientific analysis of speech patterns. First, all of the consonant data was taken from Rogers’ recording because of clarity and quality of the recording. Three to six examples of each consonant phoneme were taken to determine the average duration and voice onset time (VOT) of each. The vowel data was taken from all seven recordings, with hundreds of instances of each vowel. Average F1 and F2 data was found to determine basic vowel boundaries in order to know if Holt’s claim of the number of distinctive vowels is correct. Finally, stress patterns were analyzed according to Holt’s claims, using data from all recordings.

According to Holt, there are 22 consonant phonemes in Tol. After gathering data analyzing consonant duration and VOT, we determined that his proposed consonants are correct expect for two. First, he suggests that the bilabial approximate [w] and the bilabial fricative [β] are distinct sounds in Tol based solely on a minimal pair of two words, [win] ‘you walk’, and [βiŋ] ‘frog’. However, there are only a few occurrences in the data of [w], which have acoustic properties similar to [β]. Consequently, we believe that [w] and [β] are the same sound in Tol and that the minimal pair above is simply a linguistic anomaly created by verb conjugation patterns and is not representative of Tol as a whole. Second, Holt argues that there are three nasals- /n/, /m/, and /ŋ/. However, he does not provide a minimal pair to prove /ŋ/ as its own phoneme, and all instances of ŋ in the current data follow a predictable pattern of being either word final after a vowel (as in [βiŋ] ‘frog’) or being word initial preceding a /k/ (as in [ŋkol] ‘belly’). Additionally, Holt’s proposed orthography for Tol shows both /n/ and /ŋ/ to be represented by n, and he does not discuss any conventions concerning the two sounds. Therefore, we believe that [ŋ] is an allophone of /n/.

Our vowel analysis confirmed the validity of Holt’s suggestion of 6 vowel phonemes: a, e, i, o, u, and the high-mid vowel, ɨ. Figure 1 below shows the vowel boundaries. We also found a distinctive diphthong /aj/, which is appropriately placed exactly between /a/ and /e/. Figure 1 was made using “NORM: Vowel Normalization Suite” through the linguistic department website for the University of Oregon. Because of some limitations with the website, the character ‘ɨ’ was not recognized and was replaced with ‘@’. Although there is some overlap in the standard deviations of the phonemes, the data shows that these vowels are generally distinct from one another. Some of the overlap (especially between /u/ and /ɨ/) may be due to error in marking each vowel in ELAN.

Our analysis of stress pattern contradicted Holt’s claim (1999) states that stress in Tol is a suprasegmental phoneme, meaning stress pattern of a word can change its meaning. He doesn’t provide any data to support this claim. He recognizes that stress is follows basic predictable patterns, but that the amount of exceptions to the rules support the explanations that stress is phonemic (pg. 14). The data gathered by Rogers does not support this claim, and our phonetic analysis shows support for a predictable pattern of stress and suggests that the general pattern for stress shows stress on the vowel before the rightmost consonant. Our spectrograms clearly showed that words which seem to end with stress over the final vowel actually end with a glottal stop [ʔ], a phoneme in Tol.

These phonetic acoustic analyses provided the much-needed information to solidify the general sound patterns of Tol, allowing for the creation of an accurate language material to help preserve the linguistic diversity and cultural richness of the Tol community. 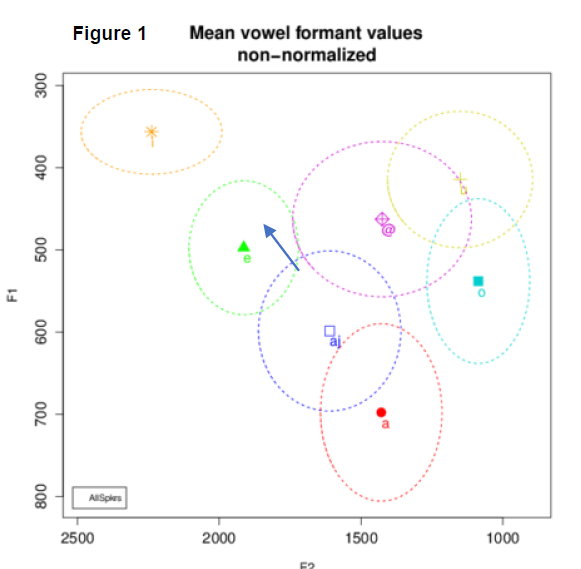