The purpose of this report is to remind the reader of goals initially set in conjunction with the original ORCA Grant project proposal in October 2017, to discuss logistical difficulties in carrying out the original project and subsequent adjustments in scope and topic of work, to represent efforts toward obtaining results during the grant period, and to comment on the implications of the study for future research and the award’s impact on its recipient’s future.

As stated in the proposal, the main purpose of this ORCA project was to compare the droplet atomization (expulsion of a fine spray) of various water-glycerol mixtures upon impact on heated silicon surfaces made superhydrophobic by carbon nanotube (CNT) deposition. The major goal to that end was to use CNT surfaces achieved by a procedure developed in BYU’s Microfabrication Lab and a unique method in quantifying the resulting data, also created at BYU. This method involves capturing droplet impact onto a hot superhydrophobic wafer using high-speed digital imaging and then using computer vision algorithms to process each frame (see Figure 1), though its true novelty lies in quantifying the volume of atomized water by summing average pixel intensity values read from processed binary images. The objective outcomes of the grant as stated in the project proposal were two-fold: the first goal was for the research to result in a publication in the International Journal of Heat and Mass Transfer, and the second goal was to win a Fulbright Grant with a proposal to carry on atomization studies after graduation in Saratov, Russia. 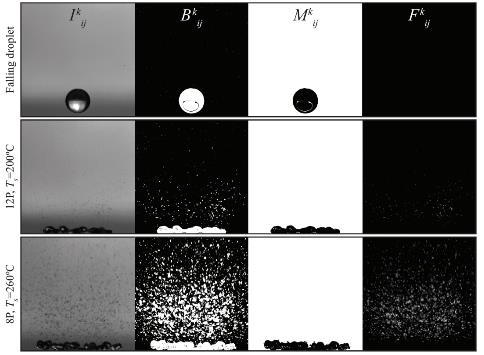 Fig. 1 Droplet images during processing, including the binary images (Bkij) and the masks (Mkij) to remove the droplet. Average pixel intensity values are taken from the final images (Fkij).

Logistical challenges threatened for months and almost predated the awarding of the grant in February. The author was aware of severe time constraints, and plans were formulated to complete the required tests between the end of June (upon return from the Math in Moscow study abroad program in Russia) and the end of August, being scheduled and cleared for summer graduation. Efforts to coordinate the preparation of surface samples in advance were optimistic at best, and a combination of equipment failure and scheduling conflicts in the Microfabrication lab precluded the possibility of using CNT surfaces in a summer drop impingement investigation. Unexpected medical issues discovered in July further complicated trips to campus laboratories, with surgery and house-bound recovery in early- to mid-August. The author’s candidacy for summer graduation was thrown into question when, after having been mistakenly cleared at the college level, the department refused the application of transfer credits earned abroad to required credits. The preceding and resulting misunderstandings decisively compromised qualification for summer graduation as late as early August and, given the upcoming medical operation, graduation was moved to December. Although delayed graduation allotted more time for the research study, these complications coincided with the awarding of and immediate preparations for a Fulbright Fig. 1 Droplet images during processing, including the binary images (Bkij) and the masks (Mkij) to remove the droplet. Average pixel intensity values are taken from the final images (Fkij). grant in Russia to start early September. After discussing the author’s failure to obtain experimental results over the summer, the decision was made to alter the focus and scope of the research.

Much thought and effort has been expended in recent years by certain graduate students in the BYU Fluids Lab in refining the process of obtaining and analyzing atomization data from the impingement setup. They have looked at optical parameters such as camera settings and lighting, mechanical variables like droplet height and density, and surface variables such as composition and geometry. One of the more prominent difficulties in comparing data is that the equipment’s sensitivity, while able to produce precise measurements, also reads minute changes in backlighting, contrast and random noise. They have attempted to combat this with noise thresholds built into computer algorithms and by normalizing all raw atomization data, but because noise thresholds change every day and there is no one convincing candidate for an atomization constant, the process is laborious and leaves much to be improved. After medical recovery and relocation abroad and upon conferring with a grad student in the Fluids lab, it was decided to study a normalization value called the contrast parameter and whether altering noise thresholds across a small range could yield a contrast parameter that remains constant for a drop filmed on different days, all other variables held constant. 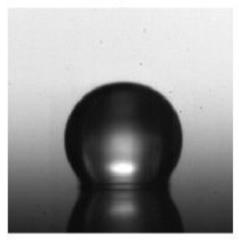 The contrast parameter is obtained from the original cropped image of the impact frame and is defined as the difference in intensity of the pixel with highest contrast to its corresponding pixel in the background image, often located near the red dot in Figure 2. While many normalization constants have been proposed, this is the one currently in use in the lab and one that does not require hours of extra testing to compute. Threshold is currently also computed, measuring noise average and standard deviation on an empty background image and considering a semi-arbitrary number of standard deviations above the mean. The contrast parameter has previously been plotted over large quantities of droplets for several different testing days with little evidence of consistency, despite occasional grouping, as shown in Figure 3. In the attempt to find any relationship between threshold and a constant contrast parameter, data taken at three temperatures with four drops per temperature on four different days were sent to the author to be analyzed at at least four or five threshold values between .01 and .05. As of the deadline for this report, no significant trends have been identified; indeed, grouping among different test days has been merely hinted at; as suggested in Figure 3, consecutive testing days (within about a week) tend to yield similar contrast parameters, but the range of values within a single day is often much greater than the difference in average contrast parameters between two days. 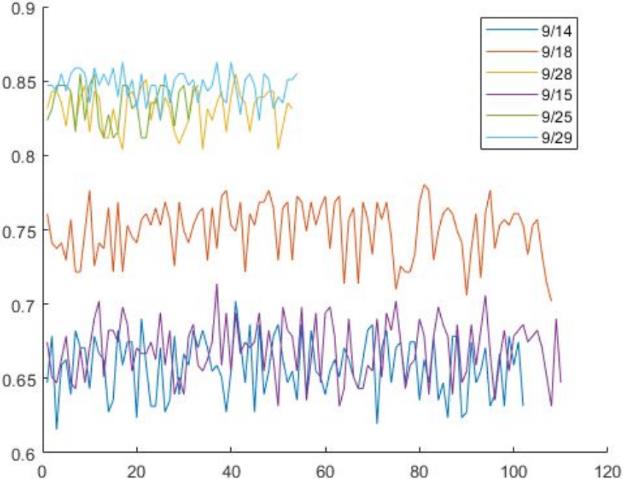 Fig. 3 Contrast parameter plotted on the vertical axis across large numbers of droplets (55-110) for 6 different dates.

It is difficult to report a lack of significant findings at the conclusion of a grant period. The first goal of a publication from this grant will not be met. However, the author achieved the second goal, becoming one of just 10 winners of the 2018-2019 Fulbright Research award in Russia with a similar project proposal, and is currently continuing the task in this report as part of the Fulbright grant and committed to share all future results with the BYU Fluids lab.