Muscle functional magnetic resonance imaging (mfMRI) is a proven concept to non-invasively identify muscle activation1. Noninvasively identifying muscle activation can be used to diagnose metabolic muscle disease, identify and pinpoint muscular dysfunction, observe muscle deterioration in aging individuals, and help researchers better understand the biological foundation of musclechemistry2. Current proven methods of mfMRI include analyzing pre- and post-exercise T2-weighted images, T2 maps, and sodium images of muscle; however, there is considerable debate around the best of these techniques1-4. We tested these three imaging techniques to determine which has the greatest post-exercise shift in signal intensity.

3 healthy male 23-year-old subjects were recruited according to established IRB procedures and performed 3 sets of 25 calf raises followed by 3 sets of 15 squat jumps with a focus on full contraction of their calf muscles. They were given 30-60 seconds of rest between each set.

All data was collected on a Siemens Tim Trio magnet using a total of 4 different imaging protocol. A 2D Spin Echo (2D-SE) sequence was used to show T2 weighted images, a 2D Multi-Echo Spin Echo (2D-ME-SE) sequence was used to construct T2 maps, a 3D Cones sequence was used to show 23Na images, and a 3D Constructive Interference in Steady State (3D-CISS) sequence was used as an anatomical reference for 23Na images. An 8-channel foot/ankle coil was used for the 2D-SE and 2D-ME-SE sequences, and a custom 6-inch 23Na surface loop coil and 4-channel flex coil were used for imaging 3D-Cones and 3D-CISS respectively. To ensure consistent imaging, subjects were marked around the thickest part of the calf with permanent marker for localization using the laser on the table. The calf muscles (gastrocnemius medialis, gastrocnemius lateralis, and soleus) were segmented for each of the scanning techniques. Mean signal values in each segmented muscle were calculated in pre- and post-exercise images for all three scanning methods.

Each method of measuring muscle activation shows a post-exercise increase in signal intensity. Comparing T2-weighted imaging shows the greatest increase in signal intensity post-exercise and is the easiest of the tested scanning protocols to utilize in acquiring data. A simple scanning method allows other fields of research (non-MR physicists) to use mfMRI. Future work includes optimizing a T2-weighted imaging protocol for better contrast and resolution.

Comparing T2 signal values showed the greatest difference in signal intensity pre- and post-exercise and is the simplest method of mfMRI due to the ease of acquiring data. This accomplishes our goal of determining the most accurate and simplest method of detecting muscle activation via MRI. 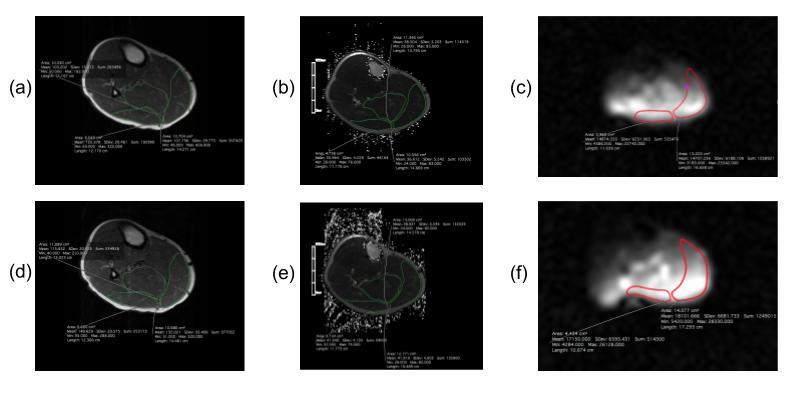