The principal purpose of my research is to produce stable, long-lasting, reproducible p-type zinc oxide for experimental and commercial use. Semiconductor devices made with zinc oxide (ZnO) have the potential to be a cheaper alternative to those made with gallium nitride (GaN). In addition, ZnO devices could also have superior physical and optical properties [1]. Because of ZnO’s wide band gap and high radiation tolerance, it could potentially be used for UV lasers and LEDs, and thin-film transistors (TFTs) [2]. However, because of natural defects in the ZnO lattice, p-type ZnO has historically been difficult to produce [3]. Our group’s work involves using magnetron sputtering to sputter thin films of ZnO on top of heated zinc arsenide (Zn3As2), thus doping the ZnO with arsenic and making it p-type.

Before sputtering zinc oxide onto our substrates, we first evaporate a thin layer of zinc arsenide onto the substrate. Our substrates are .5 mm thick sapphire wafers. The evaporation is done inside of a Denton vacuum chamber, shown in Figure 1. Zinc Arsenide powder is placed into a tungsten boat, and the chamber is evacuated to a pressure of ~1*10^-6 Torr. A current is run in the boat, causing it to heat up and evaporate the zinc arsenide powder. We monitor the evaporation via a thickness monitor in the vacuum chamber. Once the zinc arsenide evaporation is complete, inside the sputtering chamber, a high voltage RF signal run through the ZnO sputtering target ionizes argon gas, which makes a plasma. This plasma ejects ZnO molecules from the target. We believe the highly energetic Zn and O atoms coming from the sputtering target mix with ZnAs, which has been once again vaporized by heating the substrate. The resulting mixture of zinc, oxygen, and arsenic atoms are deposited onto the substrate together, resulting in zinc oxide doped with arsenic (to make it p-type). After deposition is complete, we heat the sample in an annealing process to further remove any defects in the crystal structure of the ZnO.

After our sample are prepared, one of the principal ways we characterize them is by ellipsometry. Ellipsometry is a way of finding the optical constants of a material by measuring the change in polarization of light reflected off that material. We found that ellipsometry originally gave inconclusive results. As a result, we decided to measure samples that did not have a zinc arsenide layer and found that results were much easier to measure. Thus, measuring the optical properties of the zinc arsenide layer because a focal point of my own research. By understanding the zinc arsenide layer, we could better understand how it affected our zinc oxide samples.

Our main goal has been to find the optical constants of zinc arsenide vie ellipsometry and report mixed success in doing so. To find these optical constants, we fit our ellipsometric data with an oscillator model, from which we extract the constants. We expect that the same model should fit each of our samples well, since they are evaporated from the same source. However, this is not usually the case. Often, to get a good model fit, we must adjust the parameters in our model from sample to sample. An example is shown in Table 1, which shows the model results for two of our samples individually, as well as the results when those two samples are fitted together, with the same parameters. These two samples are the closest we have seen to the same optical constants between two samples. 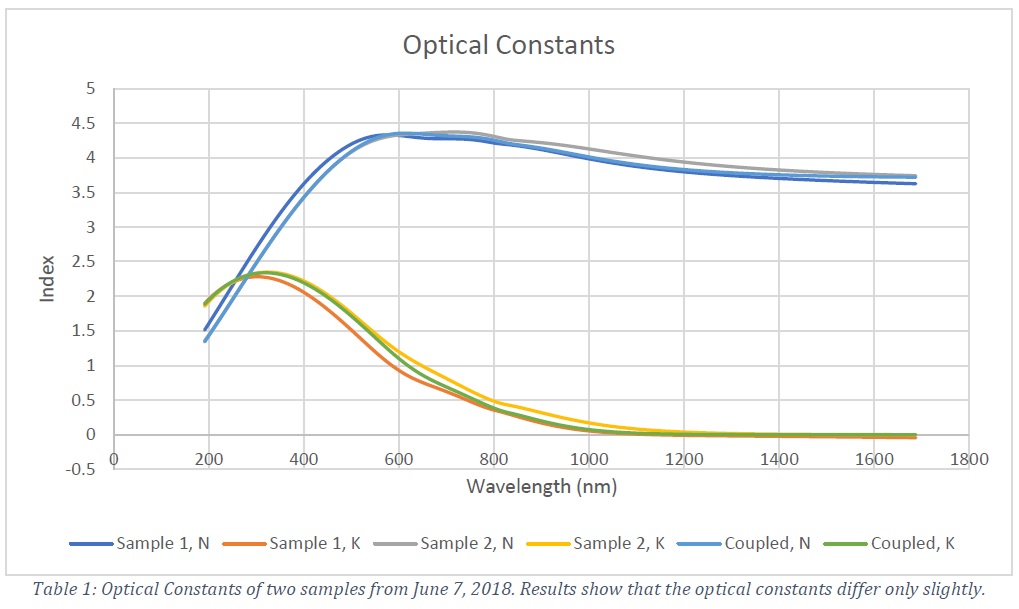 We are currently taking measures to better understand why we don’t see better fits between samples. The two samples shown in Table 1 are thinner samples (<100 nm thick), and it seems like the thicker our samples get, the harder they are to fit. Another issue we have found is that evaporation is inconsistent on our samples; one sample may yield a film on our substrate, but another made under the same conditions will not. One measure we are taking to understand the evaporation process better is by videotaping the inside of the chamber during our process, so we can see better how the film adheres to our substrates.

Despite having trouble fitting our zinc arsenide samples, we have been able to produce multiple p-type zinc oxide samples. To date, we have produced 8, and this number would be higher, but our sputtering machine has been in disrepair for the better part of the last 4 months.

Progress on our project is slow, but steady. We are excited that we have made multiple p-type samples of zinc oxide and hope to see similar results in the future.

Characterizing the optical constants of zinc arsenide has been less successful, but we are making progress in that area as well. We have some sets of samples, such as those shown in Table 1, that have very similar optical constants. As we continue to make and characterize new samples, we expect to see similar patterns and more consistency in optical constants between our samples.