Drug addiction has long been a major detriment to society. Its pervasive effects can tear apart the lives of addicted individuals. Many of these individuals go without seeking professional help. In 2015, 22.7 million Americans (8.6 percent) needed treatment for a problem related to drugs or alcohol, but only about 2.5 million people (0.9 percent) received treatment at a specialty facility. This may be due to inadequate treatment methods and therapies in use by professionals. The goal of this project is to better understand the mechanism of dopamine (DA) transmission in the brain in order to develop more effective treatment methods for addiction.

Initially, this project intended to investigate the effects Mefloquine (MFQ) on DA release. However, some initial experiments steered research towards another avenue. Specifically, the decision was made to investigate the role of intracellular calcium signalling on Methamphetamine (METH) effects on DA release. The mesolimbic system is an epicenter for DA release and METH has multiple effects on DA release within this region, such as increasing vesicle release, increasing DA accumulation in presynaptic neurons, and decreasing DA reuptake (Chu et al, 2008; Fleckenstein et al, 2009). Our lab has previously shown that METH may induce increased DA release through activation of a sigma receptor, IP3R mechanism involving the release of intracellular calcium stores. The study we performed verifies that the effects of METH involve the activity of this proposed mechanism, thereby showing that METH increases vesicular and non-vesicular DA release through multiple mechanisms.

Coronal brain slices were obtained from male C57 mice who were bred and cared for in accordance with the National Institutes of Health Guide for the Care and Use of Laboratory Animals. The animals were anesthetized with 5% isoflurane, decapitated, and brains were rapidly extracted and sectioned into 300μm slices in ice-cold artificial cerebrospinal fluid (ACSF). Slices were placed in a chamber containing room temperature ACSF bubbled with carbogen, then transferred to a recording chamber with continuous ACSF flow (2.0 mL/min) at 34-36 °C. Carbon fiber electrodes (CFEs) were placed into the NAc core and dopamine release was evoked every 2 min by biphasic electrical stimulation (4 ms pulses, 10 pulse, 350 μA, 20 Hz) from an ACSF-filled micropipette placed 100-200 μm from the CFE. Cyclic voltammograms were recorded every 100 msec (10 Hz) with ChemClamp potentiometers and recordings were performed and analyzed using LabVIEW-based Demon Voltammetry software. Stimulated DA release was detected to verify CFE placement, and after electrically-evoked DA release did not vary by more than 5% for five successive collections, the electrical stimulation was turned off and voltammograms were recorded at 0.5 Hz for 3 hrs. All recordings were performed with the pharmacological agent added at 30 min and methamphetamine at 60 min from the start of recording. Each pharmacological agent was dissolved in stock solutions and then diluted into ACSF at specified concentrations. 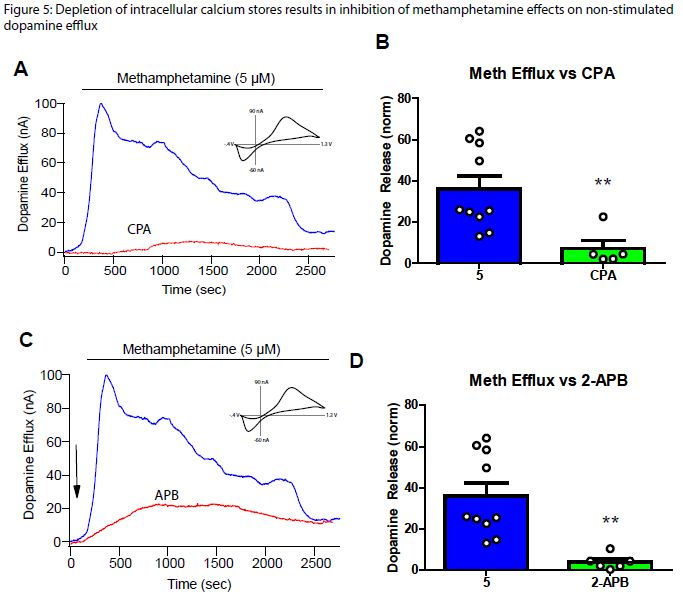