On the heels of the Brexit vote and growing anxiety accompanied with leaving the European Union, immigration in the United Kingdom persists as a breaking point between native Britons, immigrants, and recent asylum seekers. To dispel the fervent animosity between these groups, humanization needs to occur in order for each party to see the others as their equal and develop long-term peaceful solutions. Decreasing ethnic conflict is often accomplished through increased positive interactions between groups. The perception is that many more refugees are being admitted into the country and yet most Brits are not acquainted with any. Introducing citizens to refugees with hopes of developing personal connections and increased humanization is a large and costly task, so I used the writings of a refugee to test variation of support for refugees. A show of empathy from a refugee towards the average British citizen should be enough to increase Briton’s reciprocal empathy towards refugees, further humanizing the refugees. My hypothesis for this experiment is two-fold. First, I expect that individuals receiving the reciprocal empathy treatment will have increased levels of empathy as compared to those receiving the controls. Second, I expect that this increased empathy will hold for all participants, regardless of pre-measures of antipathy: in-group centric belief (ICB) and national attachment.

To test these hypotheses, I conducted a survey experiment in the UK which gathered initial measures of identity salience, then the treatment was presented, followed by questions measuring empathy felt for refugees. The pre-measures gauged antipathy levels based on two measures: in-group centric belief and national attachment. Measurements here show general attitudes surrounding refugees and national identity, respectively. Once this is measured, a paragraph is then shown to respondents portraying a scenario of a refugee commenting on a tragedy occurring in London. Two versions can be shown, one with descriptive, empathetic language and one merely stating facts of the matter. Some respondents did not receive either paragraph. Once the treatment is given, then an empathy measure is taken where respondents are asked to record feelings about refugees on a 5-point scale from “not a lot” to “a great deal” based on fifteen emotions including compassionate, warm, soft-hearted, tender, sympathy, and moved. This measure notes various secondary emotions that are often denied to outgroups when dehumanization has taken place.

Looking at statistical models of the different effects of the treatment and controls, there is a significant difference when the reciprocal empathy treatment is introduced. Empathy increased for respondents by 3.7% when given the empathetic message from a refugee. Once control variables are taken into consideration, including demographic information, support for Brexit, and antipathy measures, a slightly stronger relationship is seen with about a 4% increase in empathy with a ±.1% difference depending on antipathy measure. Age and Brexit support have inverse relations with empathy; older respondents and those who support Brexit are less likely to be effected by the reciprocal empathy treatment. As income and education increased, so did empathy towards refugees.

Although the reciprocal empathy treatment overall has an effect on respondent’s empathy towards refugees, it does appear that there is a difference based on antipathy. This likely means that the reciprocal empathy treatment was not strong enough to influence the opinions of those with high in-group centric beliefs; they may have experienced dissonance and pushed aside empathetic feelings in order to focus on political attachment. The difference between the ICB and national attachment measures appears to be substantively significant; this likely means that they are measuring different aspects of antipathy. These measures do not show the same effect of this treatment on empathy. Higher attachment increases empathy while lower ICBs increase empathy, with ICBs having a greater impact. Based on national attachment alone it would be difficult to predict if a person would respond empathetically towards refugees; ICB appears to be a better predictor of empathy. 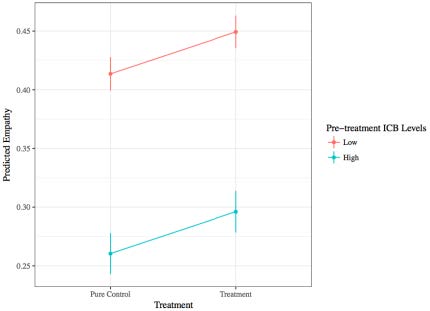 Humanization can occur even through the briefest positive interaction with someone of the opposing group. The results of this experiment, testing a reciprocal empathy approach, were statistically significant at the highest levels with about a 4% increase in empathy. A brief paragraph was able to change feelings towards refugees, but this is unlikely to be enough to change behavior regarding relationships between opposing groups or voting behavior with policies relating to refugees. In discussions, I had with people throughout the United Kingdom, it was widely believed that if there was greater interaction between groups, that tension would decrease. Knowing a refugee, or even immigrants from regions like the Middle East and Africa on a personal level was enough for these people to talk about the subject in a different light. People mentioned co-workers or even shopkeepers they have interacted with and noted that they were some of the nicest people.

“These are volatile and uncertain times. Whole tracts of Britain feel left behind. The growing sense that we have become an us-versus-them society is deeply corrosive of our cohesion as a nation.” (Bennhold, K., 2017) Part of identity development is the existence of an “other”. The us-versus-them aspect of society is inevitable, but whether these differences deeply divide society and lead to conflict is where the trouble with identity arises. Attempts at decreasing the tension between us and them vary, but our approach was through reciprocal empathy. Overall, this experiment showed that reciprocal empathy treatments can increase empathy even in those with greater in-group centric beliefs who may be expected to resist empathizing with the outgroup. The best measure of antipathy is still uncertain. In-group centric beliefs captured a different element of antipathy than national attachment. Together they may better explain antipathy towards refugees, but separately they are two different measures. Substantively the increase in empathy is minimal, unlikely enough to change the actions of individuals, but statistically there is a significant increase. A brief paragraph had an impact, so how much more would a face-to-face interaction have? This experiment showed essentially the bare minimum interaction required between two groups to produce positive feelings and it still had a significant impact.