The transition from authoritarian, planned economies to democratic market economies is one of the most ambitious and momentous political-economic endeavors of the last century. As such, it is hardly surprising that the transition has been carried out with varying levels of success. Previous literature has examined features of the reforms (i.e. gradualism vs. shock therapy) or external monitoring, support and incentives (such as was available for aspiring EU members) as determinants of the probability of successful reform. This thesis contributes to our understanding of how public attitudes and beliefs about economic reforms may be a factor in the stalled or incomplete “transitions” in many post-communist countries. It is important to understand the origins of such attitudes as their effects are still felt directly in post-communist countries today. The success of economic reforms requires the public to believe that they are credible and irreversible. Otherwise people will not become invested in the new economic systems. Social scientists are increasingly seeing such public opinion data as meaningful with important policy implications.

Specifically, I examined how government trust and satisfaction with the economic situation affects post-communist attitudes toward further economic reforms. Using both the author’s original survey data collected in Ukraine in 2016 and the 2016 Life in Transition Survey (LITS) data on all 28 comparative post-communist countries, the paper analyzes individual-level predictors of attitudes toward ownership, privatization, and economic reform in Ukraine, as well as the regional stratification of attitudes within Ukraine. In order to measure how government trust and economic satisfaction affect contemporary attitudes toward economic reforms of citizens from 28 different Eastern European countries, I accessed existing data from the 2016 ERBD LITS database. I supplemented these findings with a case study of Ukraine, using original survey data. 1,020 randomly selected Ukrainian citizens aged 18-89 were comprised this nationally representative sample of the Ukrainian adult population. This original survey included two experiments and was conducted via face-to-face interviews throughout the country by the Kiev International Institute of Sociology (KIIS).

Quantitative analysis was used to test my hypotheses. I used factor analysis and ordered logistic regression analysis to test the variables of interest. The regression tables include both models with and without Ukraine, to test for robustness and provide an illuminating comparison. In all of these analyses, the treatments were used as predictors and the attitudinal and behavior questions, including the attitudinal indices, as outcome variables. I used models that only include those predictors and outcomes and models that also include demographic data for each participant (e.g., gender, or region-fixed effects).

Overall, I found that citizens with higher levels of government trust are more likely to support a market economy or privatization. Controlling for income, age, gender, region, and education while holding the effect of country constant, we see that when citizens in postcommunist countries experience higher levels of trust in their political and economic systems, support for both market reforms and privatization increases. This supports the theoretical expectation that low levels of trust in the government will result in skepticism toward future privatization and market reforms. Furthermore, my analysis reveals that as both government trust and satisfaction with the current economic situation increases, citizens are less likely to support redistributive reforms. Similar to the finding that low government trust would heighten cynicism toward further market and privatization reforms and in turn increase support for a redistribution, I found that low levels of satisfaction with the current economic system similarly result in an increased support for redistributive policies. These findings confirm my hypotheses and suggest that the is indeed a reactionary effect increasing support for a return to state ownership among post-communist citizens currently dissatisfied with today’s political and economic systems.

Regarding the case of Ukraine in particular, my survey experiment revealed that when citizens become aware of the government implementing a nationwide broadened ownership reform, their optimism in the future of Ukraine increases significantly (see Figure A below). More surprising, perhaps, is the finding that survey experiment subjects seemed to disregard the specific reform altogether and focus rather on the general fact that something was being done to improve the system. Thus, while respondents do not appear to see the direct connection between private ownership reform and intended consequences, optimism levels are nonetheless influenced by the knowledge that the government is trying something. Moreover, while Ukrainians will admit that there is corruption entrenched in the current system, citizens are surprisingly optimistic about the future of their country as a whole. Even among those respondents who recognize corruption as the greatest problem plaguing their country, they see their country slowly moving in a positive direction with reforms eventually catching on, as opposed to a country still plagued by the same levels of corruption and inequality. 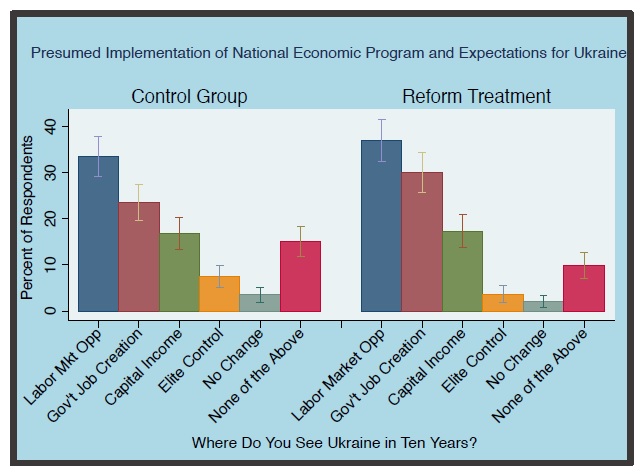 Figure A. Presumed Implementation of National Private Ownership Program and Expectations for the Future of Ukraine