In my proposal, I wrote that the purpose of this project was to construct my final BFA show, in which I would display a large-scale installation exploring the uncanny through architectural simulation with Las Vegas as a case study. I was interested in how reality and imitations of that reality were becoming integrated and even indistinguishable. I proposed that I would take a trip to Las Vegas, photograph and try to understand the architecture there, and then make a replication of a roadside motel. While the final product changed drastically from what I initially proposed it to be, the things I learned and the experience I had while finishing this project and my final show, were much more interesting and valuable than I had anticipated.

Most of my research happened over my 5-day stay in Las Vegas. I chose twelve hotels I thought served as the best examples of architectural simulation: The Venetian; The Mirage; Treasure Island; New York, New York; Excalibur; The Luxor; The Stratosphere; Paris, Las Vegas; The Bellagio; Caesars Palace; The Flamingo; and Circus Circus. I also had arranged for a tour of the Neon Museum to look at old Las Vegas neon signs and learn some of the city’s history. I had allotted 2 hours for each location, during which I would wander the casino and grounds and take photographs.

In terms of putting the show together, I decided the best way to present the things I learned was through videos and selecting a few of my best photographs from the trip. In making the videos, I built digital “sets” in the life simulation game, The Sims 3 , and I used the game’s built-in recording mechanism in order to film or record.

After my tour of the Neon Museum I found a book titled The Strip: Las Vegas and the Architecture of the American Dream Book by Stefan Al in which it discussed how Las Vegas’ changing architecture replicated the changing American Dream. For example, the mass migration to suburbia following WWII brought modern architecture with large lawns to the Strip (The Flamingo) or Las Vegas became more kid friendly with roller coasters and fantastical casinos (Treasure Island) in response to America’s obsession with making things “family-friendly” in the 90s. Ultimately I found that Las Vegas as a small simulation of America.

The focus on consumerism, entertainment, and leisure; the diversity of the people there; the unrealistic idea that anyone can get rich — all of these things I observed also are attitudes and things I see in the United States. I thought it was interesting that in a country and a city that tells people that they can be and do whatever they want, limitations are as tight as they were 100 years ago. My parents’ generation and my generation will make less money and will live at a lower socioeconomic level than their ancestors due to stagnant wages and rising living costs. 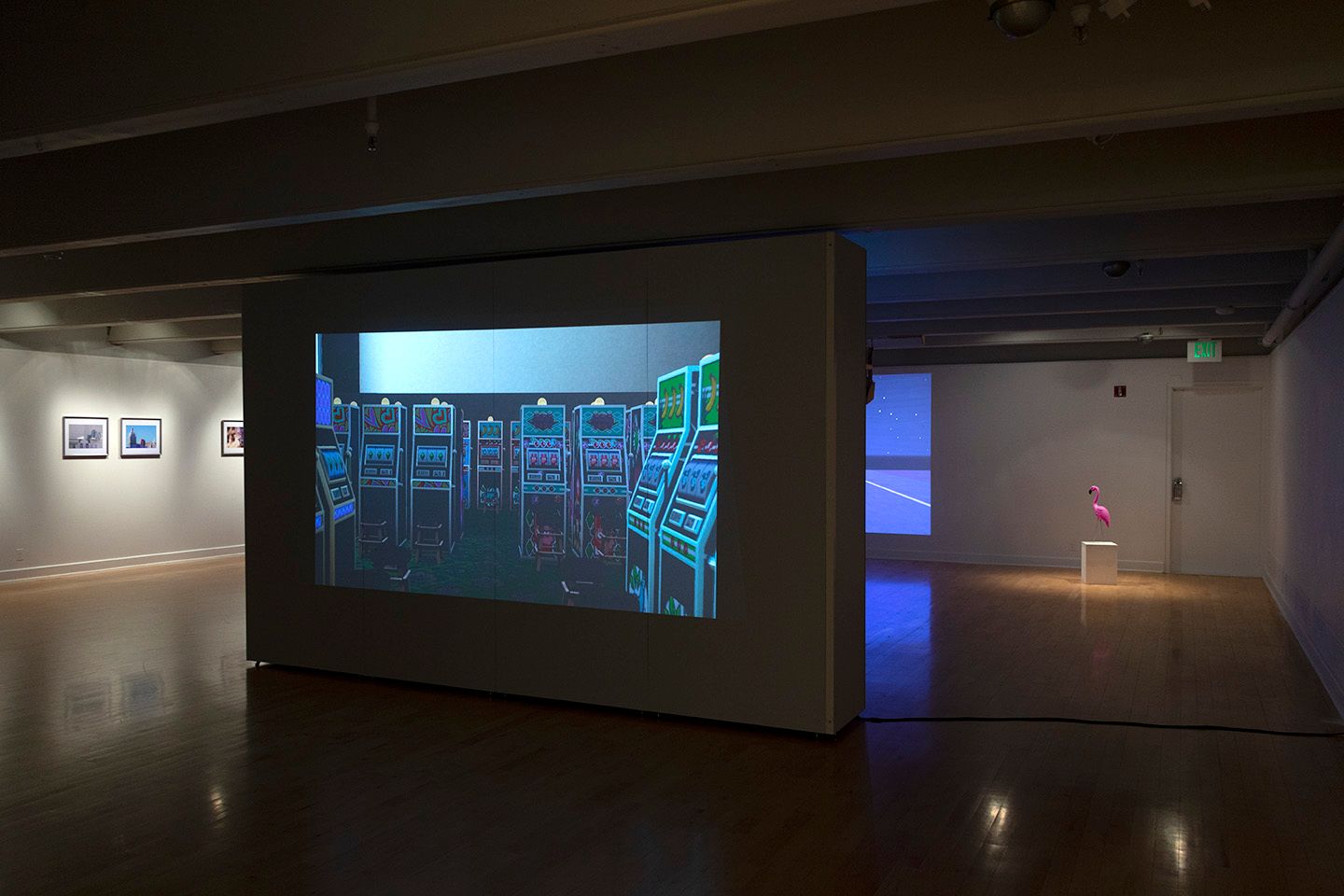 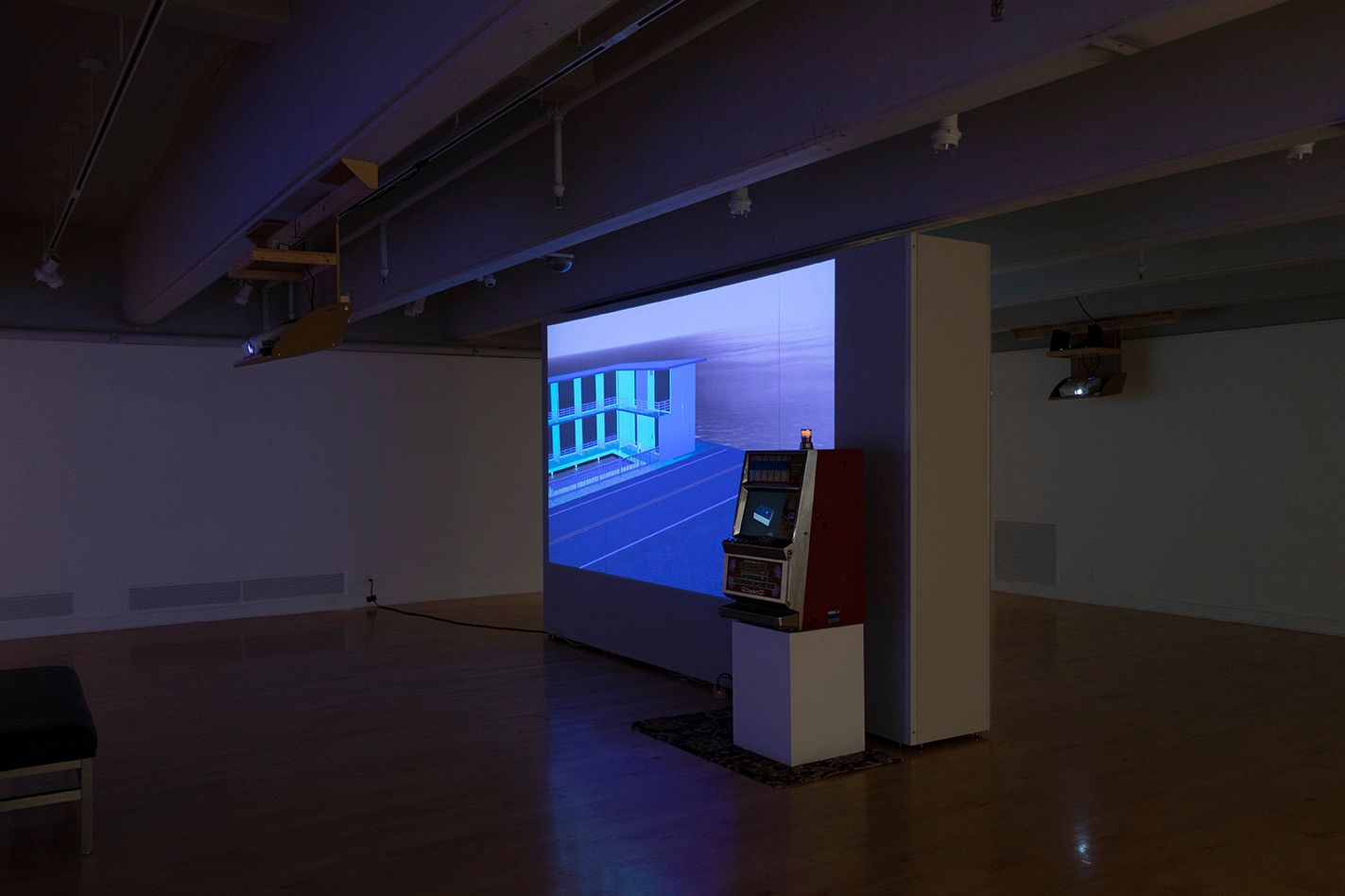 My photographs presented a straightforward exploration of simulation in Las Vegas. While I was thinking about our economic reality while making this show and using Las Vegas as a place to locate those feelings upon, I think those anxieties don’t entirely surface in the show. The videos show time passing eternally; a being stuck in a casino, doomed to wander around the slot machines endlessly; a similar being left to wander the road outside a replication of the Flamingo, wondering how they can escape the digital map they are trapped in; a woman looking out at an endless ocean from the edge of her world; and another woman, swimming in a pool on a loop inside a slot machine. The videos are calming and utopic almost, even if the people inside them can never leave outside the bounds I have created for them.

While my videos did not deal directly with the ideas concerning economics, simulation, or Las Vegas, they still existed in simulated spaces, most of which also simulated Las Vegas buildings themselves. The content of the videos dealt with feeling trapped or engaging in the same behaviors with no changes to the outcome. To me, this reflected my anxiety about how as an American society, we raise people to employ the same ideas, attitudes, and actions in the hope of being successful but so few of us are due to forces outside of our control such as being subject to those who value profit over compensating their workers fairly.

I think Las Vegas is both wonderful and horrible. It’s a place where people can find a kind of freedom and fun but the city also depends on taking advantage of people to take their money from them. I am, as most Americans are, frustrated with my country and my people. I think there are many wonderful qualities Americans possess but I also think we have become complacent in how we relate to the forces that govern us. While my final project did not tangibly deal with the idea of reality and simulation becoming enmeshed, it at least helped me come to terms with how I and others often mistake a fantasy for reality when we think of our current world.

Figure 1 — Entrance of final show: in front, the video Slots ; left, Las Vegas photographs (in total, 8 photos); rear, video Back and Forth and sculpture Idol.