Patients who undergo surgery may experience infection in the surgical site due to bacteria with a biofilm phenotype. This biofilm can render the bacteria resilient to standard antibiotics and the wound must be disinfected with an antimicrobial solution. Hypochlorous acid (HOCl) is a commonly used surgical antimicrobial used to disinfect these surgical sites. However, there is uncertainty as to whether the HOCl affects the stiffness and strength of the remaining sutures. These sutures are typically absorbable and need to maintain their integrity for the wound to heal properly. The purpose of this mentored research was to determine the effects of HOCl on the mechanical integrity of commonly used surgical sutures. Dr. Anton Bowden was my mentor throughout the research and testing and Dr. Rob Ferguson, M.D. was our consulting doctor.

We started by selecting four commonly used sutures: Vicryl, Monocryl, Chromic Gut, and PDS. All sutures are absorbable and all, with the exception of Chromic Gut, are synthetic. After choosing the sutures, we formulated the procedures for our testing. In the first procedure, the sutures were kept in bath of Phosphate Buffered Saline (PBS) held at body temperature. They had no exposure to the HOCl and this served as our control. Our second procedure involved the sutures being held in PBS at body temperature as well, except they were removed once a day and soaked in HOCl for 15 minutes and then placed back in the PBS bath. This continued for the first two weeks of the testing. The third procedure was identical to the second except that the sutures were soaked twice a day. According to Dr. Ferguson, the second and third procedure represent the normal and worst case disinfection procedures respectively. For our fourth and final procedure, we soaked the sutures in the HOCl for 15 minutes twice a day for the first two weeks and left the sutures exposed to air instead of PBS. This procedure was meant to test possible oxidation that can occur between the HOCl and the suture.

All procedures lasted 6 weeks in total as per instruction of Dr. Ferguson. He has informed us that this is the maximum time that the body would need to rely on the sutures before healing on its own. At 8 discrete time periods, 4 samples of each suture were removed and testing on a Mini Instron Tensile Tester (Instron Model 3345). There were 4 samples of each type, procedure, and time period tested making of total of 128 sutures tested. After testing was completed, the tensile properties of the sutures were analyzed using a Multivariate Analysis of Variance (MANOVA) with p=0.05. Our results are shown below: 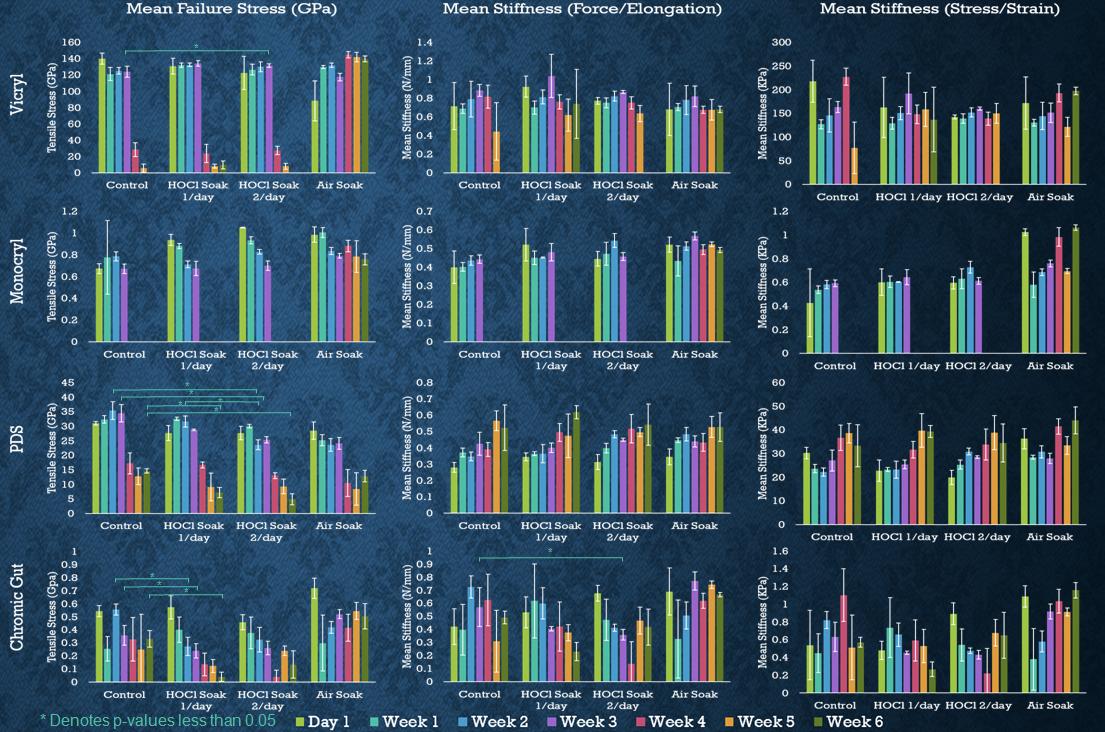 After full analysis of the data, we found some significant effects of the HOCl on the sutures. We noticed that the failure strength of the Vicryl and the Monocryl was fairly consistent until after week 4. After that week, the failure strength plummeted. This pattern was consistent for the first three procedures and can due to the glycolide core that both sutures share. However neither of these sutures showed any significant changes due to the HOCl nor any significant effects during the Air Soak.

The PDS Sutures also saw a drop in failure strength after week 4, except the strength also dropped for the air soak which was unique for the PDS. There were significant drops in the failure stress between the Control and the HOCl 2/day soak and an increase in stiffness along with the decrease in strength. This indicates that the HOCl caused embrittlement in the PDS which in turn decreased its tensile strength. From the Air Soak procedure, we can also assume that oxidation occurred between the HOCl and the sutures due to air exposure.

The Chromic Gut saw significant decrease in failure strength between the Control and the HOCl 1/day soak. Chromic Gut, unlike the other sutures, is organic and degrades by proteolytic enzymes. HOCl is capable of activating dormant enzymes so it is possible that some proteolytic enzymes were activated that accelerated degradation. However we did not see these same results from the HOCl 2/day soak so more testing would need to be done to confirm this hypothesis.

Our research and findings were presented at two different poster sessions this past fall. The first was the Biomedical Engineering Society (BMES) Conference in Atlanta Georgia on October 18- Figure 1: Mean Failure Stresses and Stiffness values of each suture, procedure, and time period. 19th and the second was at the Utah Bioengineering Conference (UBEC) at the University of Utah on December 7th. We are also expanding the research to test the degradation effects of HOCl on Accellular Dermal Matrices (ADM) and Tissue expanders. Both of these devices are used in implantation for cancer patients and both with undergo similar disinfection processes to the sutures. We are currently doing tests for ADM and Tissue Expanders and we expect to publish our findings (as well as the findings for the sutures) but the end of BYU’s 2019 Winter Semester (April 18th).

It truly was a privilege to receive an ORCA grant and to do mentored research with Dr. Bowden and Dr. Ferguson. I learned a lot from the research process and have received a lot of experience that will help me in my engineering career. I am so grateful for the trust and sponsorship that was given to me and I know that our findings will greatly benefit the medical and biomedical community.