Conflict resolution is a popular topic among political scientists, as seen in the study of controlled communication, concession-making, self-perceived victimhood, and threat perception. Previous work has shown that humanization between in-conflict groups is primarily successful when the expression of empathy is unrelated to the conflict itself and catalyzes “reciprocal empathy,” creating a more humanized perspective of the group as a whole (Gubler et al. 2015). While social psychologists and political scientists have shown how humanization can create empathy (Gubler et al. 2015), none had studied how humanization affects the shared choice set of policies for conflict resolution nor had anyone studied humanization between citizens of a country and refugees. With almost 120,000 refugees in the United Kingdom and increasingly diverse public opinion, the country was a great place to conduct this new research.

In January 2018, I went to the United Kingdom as part of the LMRP (London Mentored Research Program) under the direction of Professors Joel Selway and Joshua Gubler. We administered an online survey to about 5,000 people through Qualtrics. The survey randomly assigned participants to three different groups; one group read a message written by a refugee sympathetic to the Grenfell Tower tragedy, while another read an apathetic message by a refugee and a third read no message at all. We then asked about the participants’ feelings towards refugees, support for various policies about refugees, and a willingness meet with a refugee. Policy themes included border security, granting asylum, quotas, loans, and resettlement; people responded to each policy and indicated their willingness to meet with and discuss compromise with a refugee. I had four hypotheses:

1. The treatment will create higher levels of empathy, allowing British citizens to see refugees as human.

2. Individuals will generally support more policies that are beneficial to refugees following administration of the humanization treatment.

3. After the treatment, individuals will have greater support for individual policies that are beneficial towards refugees.

4. After the treatment, individuals will be more willing to meet a refugee to discuss possible compromise.

In my statistical analysis, the independent variable was the treatment group. I then analyzed the four hypotheses, using empathy, support for a list of policies, support for individual policies, and willingness to meet a refugee as my dependent variables. My analyses controlled for standard demographics and influences including age, gender, income, education level, national identification, and support for Brexit.

We found that those who read the sympathetic message felt more empathy for refugees than those who did not read a message. The result that was both the most surprising and exciting was that the treatment worked for individuals who felt high levels of antipathy towards refugees prior to the treatment; this is a new result that has been unsuccessful in other studies (Figure A). Through the creation of empathy, respondents supported a slightly greater number of policies that are beneficial to refugees, though this is hard to apply substantively. Also through empathy, respondents’ support for positive policies slightly increased. Although the substantive effect may seem small, a slight shift in the right direction can move fence-sitters – those who are slightly unlikely to support a policy move towards being slightly likely to supporting that same policy. This can make a drastic difference when the policy at hand potentially faces a vote. Again through empathy, respondents were more likely to be willing to meet a refugee when they had read a treatment message.

This project is unique in its focus on refugees and refugee policy, as opposed to immigrants and immigration policy more broadly. Refugees have a unique set of needs that may require policy solutions that are distinct from other types of immigrants. Although initially we aimed to focus on the policy portion of the study, the results we found regarding antipathy and empathy were much more substantive and significant. This research led to a second study conducted by students during the summer, with whom we are currently working to finalize the paper to submit to prominent political science conferences, including the Midwest Political Science Association. Although our study’s paper was completed in April, we will finish this two-study paper by December, highlighting the results regarding empathy, dissonance, and the difficulty to change people’s political preferences. The opportunity to research in London and write a professional academic paper for prestigious conferences and journals has been the most valuable educational experience of my political science degree at BYU. As I graduate this semester, I am much more competitive for graduate programs and pursuing my passions as a result of this program. 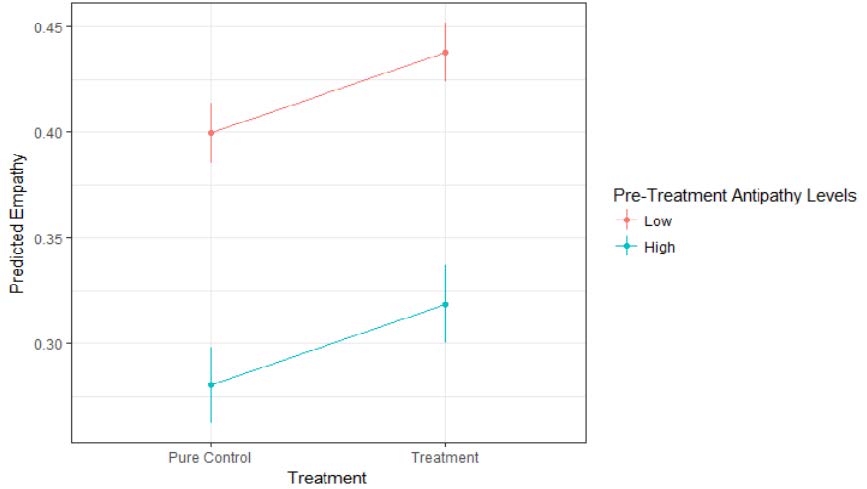