Alcohol abuse disorder is a ubiquitous problem affecting 15.1 million people in the United States, almost 10 million men and more than 15 million women (SAMHSA, 2015). The prevailing view of addiction, including alcohol addiction, is that an increase of the neurotransmitter dopamine in the nucleus accumbens within the brain has powerful rewarding effects. The purpose of this project was to evaluate the effects of alcohol on dopamine release in female rats during the three phases of the estrus cycle in order to determine if alcohol is more rewarding at different points in the female hormone cycle.

Two techniques, microdialysis and voltemmetry, are utilized when measuring dopamine levels in the reward circuit of the brain. Microdialysis involves collecting samples by inserting a microdialysis probe into the nucleus accumbens of a female rat, and flowing artificial cerebrospinal fluid (aCSF) through the probe for 20 minutes for each sample. This allows for the collection of neurotransmitters from the nucleus accumbens. At a certain point, 2.0 g/kg ethanol is injected and collections are taken until dopamine levels return to baseline. Upon analyzing each sample, subtle differences in peak dopamine levels can be seen in different phases of the estrus cycle. The second technique, voltammetry, aims to measure the amount of stimulated dopamine released in the brain by placing a stimulating wire in the Ventral Tegmental Area (VTA) of the brain and a recording electrode in the Nucleus Accumbens (NAc) to measure the amount of dopamine that is released upon stimulation. Dopamine levels are then evaluated after injection of 2 g/kg ethanol and compared between the phases of estrus. Both microdialysis and voltammetry are valuable techniques in determining the rewarding effects of alcohol. Microdialysis provides insight on the tonic release of dopamine while votammetry shows how dopamine is released phasically. When combined, they provide a complete model of how the estrus cycle is involved in alcohol addiction. The phase of the estrus cycle for each rat is determined by vaginal swab and subsequent staining of specific cells in order to differentiate between the three phases.

Due to prolonged renovations to the vivarium and surgery suites in the Kimball Tower, we were unable to perform the microdialysis portion of our project. Despite this setback, the voltammetry results offered novel information. Figure 1(a) shows that female rats exhibited a larger amount of phasic dopamine release when compared to male rats, confirming previous experiments indicating a difference between male and female reward response. 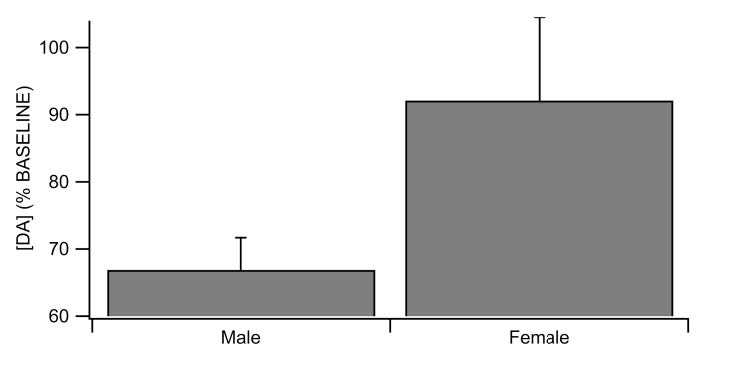 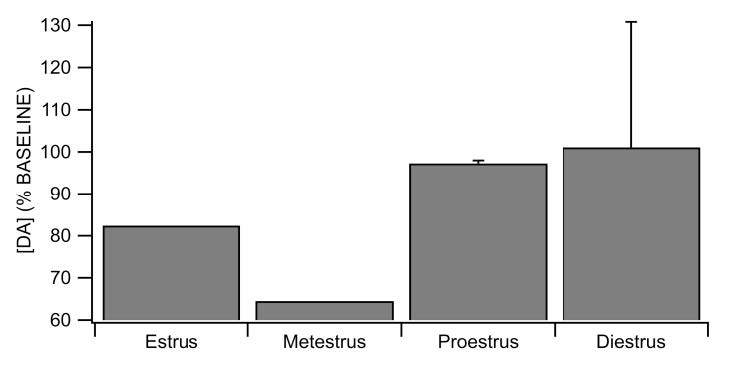 It has been clearly shown that males and females differ in phasic dopamine release in the reward circuit due to alcohol exposure in figure 1(a). Current dogma indicates that because females have a higher level of dopamine after drug exposure, pleasure and reward responses also increase. In order to understand this variability between genders, the female estrus cycle was investigated. While the collected data in figure 1(b) demonstrate a variability in each phase of the estrus cycle, it is far from conclusive. Due to the adjustments that were made in response to the renovations of the vivarium and surgical suites, sample sizes were limited, which restricts the reliability of the results. In order to be more conclusive, there is a need for further research to be done involving the estrus cycle. By increasing the sample size of rats in each phase of the estrus cycle using voltammetry, the credibility of the results will increase and clear patterns should emerge. Furthermore, experiments involving microdialysis will provide a tonic representation of the possible variations of dopamine levels in the NAc of female rats during the estrus cycle. These experiments are already underway and data is being collected.

As stated in this project’s initial proposal, the Alcohol-related Disease Impact (ARDI) reports that nearly 88,000 people (approximately 62,000 men and 26,000 women) die from alcohol-related causes annually, making it the third leading preventable cause of death in the United States (CDC, 2015). Thus, alcohol abuse disorder is a wide-spread disorder that affects both genders in devastating ways. Current data shows that the female hormone cycle could influence how rewarding and addicting alcohol is, and is therefore a possible avenue into more specific treatment plans for women who suffer from alcohol addiction. While these studies are still in their infancy, it is hoped that with further investigation in sex specific alcohol-related research, researchers and physicians will be able to more fully understand this disease and improve treatments for the men and women who are deeply affected by it.