Studies suggest that social relationships play a critical role in physical and mental health1, with effect sizes similar to that seen for smoking and alcohol abuse. Those experiencing real or perceived social isolation show higher rates of mortality3, while those with stronger social relationships show decreased rates of mortality4. Also, genetic variation has been associated with the degree of individual sociability2. The serotonin (5-HT) and oxytocin (OT) systems are believed to influence social behavior6,2. The serotonin transporter (SERT) gene codes for efficiency of the serotonin system, with the long (L) allele associated with greater efficiency, when compared to the short (s) allele. A naturally-occurring gene variation of the oxytocin receptor (OXTR) gene leads to increased sensitivity to OT, when compared to the ancestral gene. Thus, the allele variation (A) leads to increased rates of OT receptor binding, when compared to the ancestral allele (G). Due to inherent difficulties in understanding the impact of the SERT and OXTR genotypes on behavioral outcomes in humans, a rhesus macaque (Macaca mulatta) model is used to investigate genetic influences on behavioral outcomes, as they possess many social and genetic similarities to humans7, including orthologous SERT genotypes and parallel OXTR genetic variability. Rhesus monkeys are ideally suited to model genetic effects due to their environment that can be easily controlled and maintained. Importantly, rhesus monkeys are commonly used as experimental models to investigate loneliness5 and social behaviors. Hypothesis 1: Subjects homozygous for the L allele of SERT gene will exhibit an increased degree of affiliative behavior when compared to subjects possessing an s allele. Hypothesis 2: Subjects homozygous for the A allele of the OXTR genotype will exhibit an increased degree of affiliative behaviors when compared to subjects possessing a G allele.

Subjects were N = 127 (55 males, 72 females) adult rhesus monkeys (M = 6.23 years) housed in large social groups at the California National Primate Research Center. Social behaviors (i.e., number of social partners, rates of grooming, rates of initiating or receiving social interactions, times focal subject was in social proximity to a conspecific) were scored in four, 300-second observation sessions by technicians who were trained by an expert observer and achieved a reliability rate of 85% or above. DNA was extracted through blood samples collected at 3-4 months of age and genotyped. DNA was extracted using DNEasy kits (Qiagen, Inc.) according to manufacturers’ instructions. N = 127 samples were sequenced for SERT genotype with an  ABI 3730 DBA Analyzer using fluorescence technology. N = 33 samples were sequenced for OXTR genotype with an Illumina’s Genome Analyzer using the sequencing-by-synthesis method. Data Analysis was done using SPSS, version 25 to run One-way Analyses of Variance (ANOVAs) to determine the relationship between SERT and OXTR genotype and social behaviors.

Though it only neared traditional significance, the SERT genotype results seem to support our hypothesis that subjects homozygous for the L allele exhibit evidence of increased affiliation, when compared to subjects possessing an s allele. A posteriori analyses found that subjects homozygous for the L allele had more social partners on average than subjects with an s allele (p < 0.09). This finding is consistent with studies showing that low serotonin activity is associated with impulsivity and aggression, which are contrary to healthy social interactions6. In further support of our hypothesis, subjects that were homozygous for the A allele of the OXTR gene showed evidence of greater affiliation than their G allele-possessing counterparts, receiving more bouts of grooming, on average (p < 0.002) These findings suggest that the serotonin and the oxytocin systems are involved in an individual’s ability to engage in appropriate social behavior and suggest that individuals homozygous for the L allele of the 5HT and the A allele of OXTR show evidence of increased affiliation when compared to individuals with other SERT and OXTR genotypes.

Our findings have been presented at the Utah Conference of Undergraduate Research as well as at the American Society for Primatologists (ASP) annual conference. While at ASP, the research was well received with experts in the field very excited for the outcomes of further study. Due to the relatively low sample size of OXTR subjects, a future study will be done increasing the number of subjects. The data collection for these added subjects have already begun. A manuscript is currently being prepared for publication. 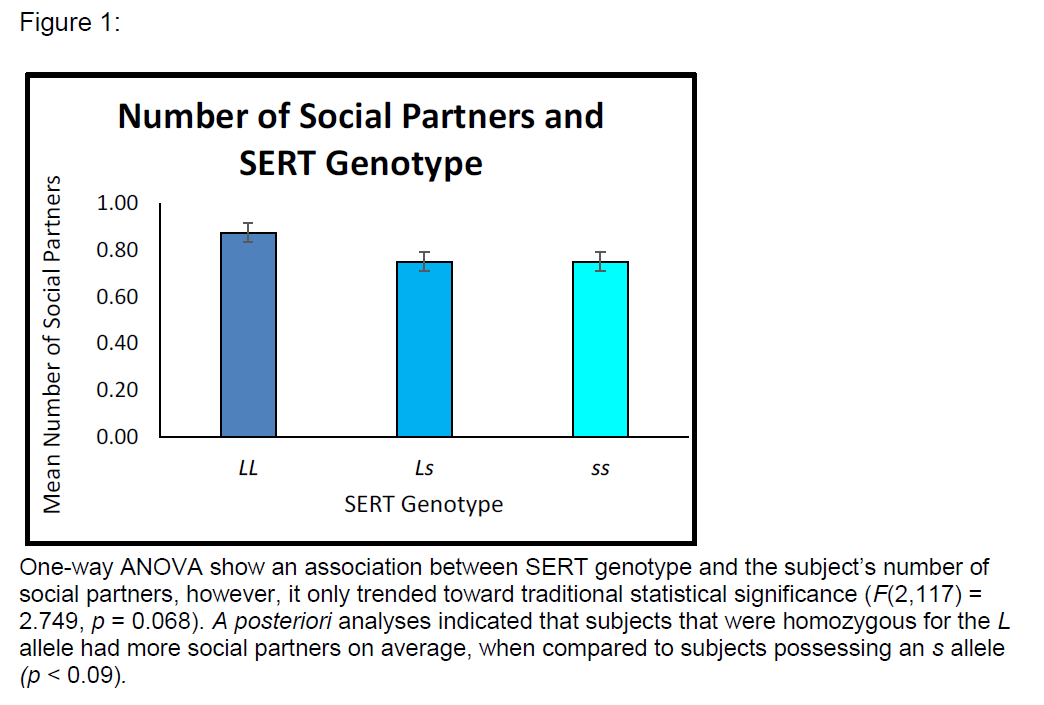