The research I conducted with Haley Peterson in London during the Winter 2018 semester under the direction of Professors Chris Karpowitz and Joshua Gubler was one case in a multi-case study focusing on the effects of humanization on conflict resolution in conjunction with the psychological effects empathy and dissonance.

Conflict resolution research has recently explored a new topic: humanization. Previously tested in areas of violent conflict, humanization experiments aim to influence ingroup members to (1) view the outgroup as human and (2) to create empathy towards the outgroup. With the influx of refugees in Europe and the subsequent rise of highly nationalist, anti-refugee sentiment (largely as a result of fear of terrorism, perceived to be affiliated with the refugee influx), we conducted a survey experiment on over 4,000 citizens of the United Kingdom. In this survey, we administered a humanization treatment and measured empathy, support for beneficial policies for refugees, and willingness to meet a refugee to discuss possible compromises. In our analysis, we found that the humanization treatment, mediated by the creation of empathy, increased the number of policies supported as well as the level of support for beneficial policies. Additionally, the humanization treatment, mediated by the creation of empathy, increased respondents’ willingness to meet with a member of the outgroup to discuss compromises.

Based on our results, we were delighted to see that there was a positive correlation between our respondents humanizing the refugees and the number of policies they would support on behalf of the refugees. When we combined our data with that of the Spring/Summer group, the positive results were not as readily seen. Initially, we needed to mediate the effect of the humanization treatment with empathy in order to get the results we wanted to see. However, that is like adding an extra variable into an equation to make it display our desired results.

What we did come to realize, is that we were looking at a set of results that conflated all of our respondents into two groups (positive and negative effects) when it actually should have been in four groups. Respondents are naturally going to feel two sets of feelings, on varying levels, when pit against our humanization treatment: empathy and dissonance. Empathy is the “good reaction” where people have a desire to help the refugees. Dissonance is the retraction of those good feelings where they justify not helping them. We found that when people have high levels of empathy and low levels of dissonance, there is an increase in the number of people who are willing to consider beneficial policy options and discuss compromises. When there is high empathy and low dissonance, the two feelings cancel each other out and there is either no or little effect from the humanization treatment on respondents. When there is low empathy and high dissonance, there is a predictably negative effect—less people consider policy options and discuss compromises. Finally, when there is low empathy and low dissonance, there is a weak effect where respondents fall almost anywhere on the spectrum of willingness to change.

This revolutionizes the way theorists observe the concept of humanization because, as we illustrated, it is more than a unilateral study of cause an effect. We discovered there are potentially more variables at play than was initially observed. Nevertheless, it moves us another step closer to conflict resolution because it changes the way people ought to be approached. Every person is a product of his or her experiences and will thereby react differently to a humanization treatment such as this. 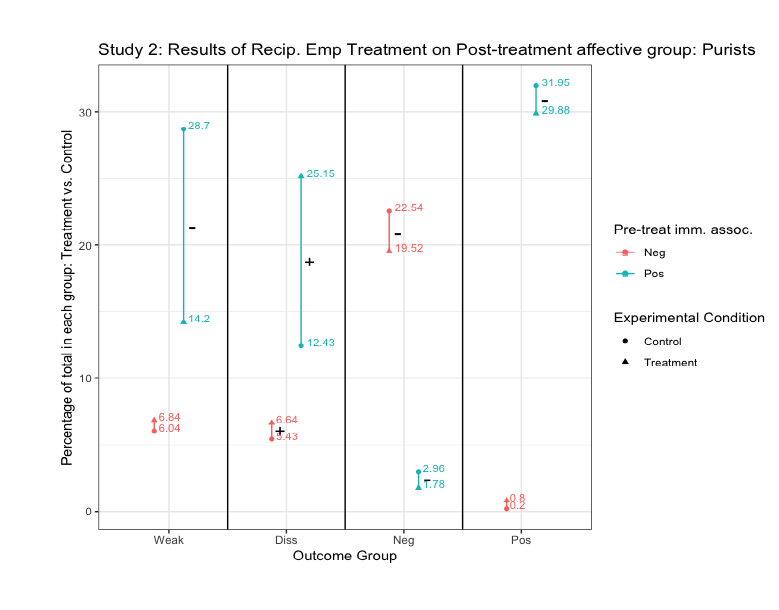 Figure 1 – This figure illustrates the four groups of varying degrees of empathy and dissonance the study. The graph shows the percentage of how many respondents moved from negative to positive effects (or vice versa), based on the humanization treatment. Additionally shown is the percentage of how many respondents shifted within their initial treatment group (if any).