Stainless steel structures are often affected by stress corrosion cracking, which makes microscopic cracks that can go unnoticed and eventually cause the structure to fail. A useful method for detecting stress corrosion cracking is nonlinear resonant ultrasound spectroscopy (NRUS). NRUS involves vibrating a sample and looking for amplitude-dependent shifts in the sample’s resonance frequencies. NRUS tests are typically performed by driving vibrations in rods with piezoelectric transducers and measuring the amplitude-dependent shifts in the resonance frequencies. I am developing a different technique for driving the vibrations, which has never been used for NRUS. The technique uses a coil attached to the rod, which is placed in a strong magnetic field. Compared to the piezoelectric technique, which can only excite longitudinal vibrations, this electromagnetic technique allows us to excite three different types of vibrations in a rod sample: longitudinal, torsional (twisting), and bending vibrations, and conduct NRUS measurements for each type.

NRUS detects damage by showing the nonlinear elastic properties of damaged materials. A transducer, typically a piezoelectric, is used to vibrate a sample at a range of frequencies, and the frequency response is measured with a laser Doppler vibrometer, giving a resonance peak (Figure 1). For a linear material, like undamaged metal, the resonance frequency is independent of the vibration amplitude, but if the sample is damaged, the resonance frequency will shift to lower frequencies at higher vibration amplitudes.

A piezoelectric transducer can only vibrate the sample in the longitudinal direction, but we would like to study torsional and bending vibrations as well. By using a coil in a magnetic field as the transducer, we excite vibrations with the Lorentz Force, or the force of the magnetic field on the current-carrying wire. We can change the direction of the driving force by simply changing the orientation of the sample and the magnet (Figure 2). This allows us to excite longitudinal, torsional, and bending vibrations and conduct NRUS measurements for each type.

One possible cause of the discrepancy between techniques is “slow dynamics”, where vibrating the sandstone sample changes the elastic properties. Figure 3 shows how a nonlinearity parameter α changes through a series of 10 back-to-back NRUS measurements. The trend is different for each technique, suggesting that slow dynamics may have a different effect with each excitation technique.

We are still conducting tests to evaluate the difference between the piezoelectric and electromagnetic excitation techniques, but it is evident that the two techniques behave differently, which might make one more useful or more reliable than the other. 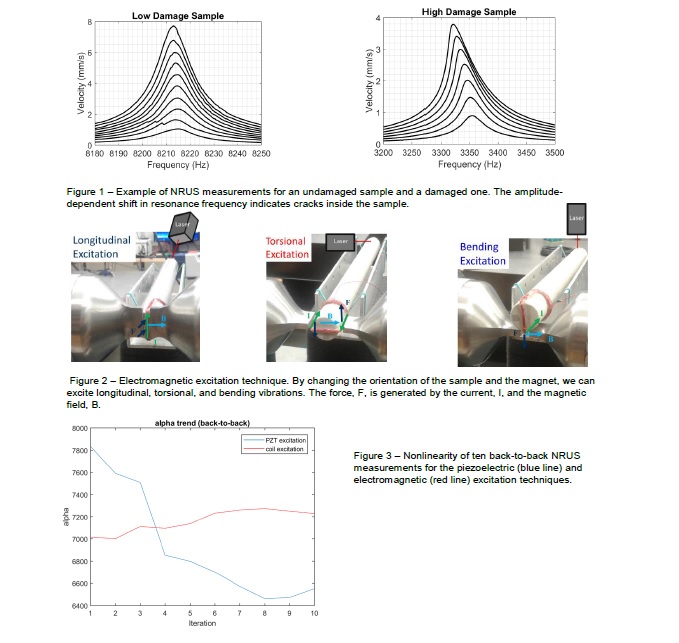