For this project we were able to replicate a previous study that had analyzed the different trends in Newbery books from 1975 to 2009. This project looked specifically at the Newbery Award and Honor books from 2010-2018. In order for the characters to be evaluated it had to include a main (protagonist or antagonist) or supporting character that would require special education as covered in the 13 conditions covered by the Individuals with Disabilities Education Improvement Act, including: physical impairments, deafness and emotional disturbance.

First, we were able to identify the Newbery Medal and Honor books that included characters with disabilities. At this point, we read the qualifying books and then completed evaluation forms for each of them. Because of the nature of this project, it was important to have more than one reader to complete the evaluations for reliability purposes. My coworker, who is familiar with the evaluation form, also read the books and completed the forms. We used a modified Rating Scale for Quality Characterizations of Individuals with Disabilities in Children’s Literature. Some of the sections of the Rating Scale include personal portrayal, social interactions and relationships, and exemplary practices. After individually reading the books and completing the Rating Scales, Hannah and I discussed the results and cleared up any discrepancies we had in our data.

Of the 38 Newbery books that were awarded between 2010 and 2018, two (5%) of the books that contained a main or supporting character with a disability are Newbery Award Winners and six (16%) of the books received a Newbery Honor Award. However, there were some books that had characters with disabilities that were deemed too insignificant to incorporate into the evaluations. Of the eight books we evaluated, there were a total of nine characters that could be evaluated. We found that the most common disability was deafness, followed by emotional disturbance, orthopedic impairment, specific learning disability, speech impairment and traumatic brain injury. All disabilities received an acceptable rating in social relationships except for those with Emotional Disturbance. This means that the portrayal of these characters was more negative than those with other disabilities. We also evaluated the race/ethnicity of the characters included in the study. Most of the characters are White (77%), one character was Filipino (11%), and one was an animal in El Deafo, Cece is a bunny (11%). This data is disproportionate to the number of children of other races that have disabilities in the United States. We have a lot of data from this set of books that will eventually be compared to and combined with the data from the studies analyzing the Newbery Books from 1975-2009.

We will be presenting our research at the Council for Exceptional Children Division on Autism and Developmental Disabilities (DADD) conference this coming January. Our proposal to present at the Utah Conference on Undergraduate Research has been accepted and we will be presenting in February of 2019. Additionally, we will present at the McKay School of Education Mentored Research Conference in the spring. With the supervision of Tina Dyches, we are working on our research article that will be submitted to various Journals, including the Education and Training in Autism and developmental Disabilities DADD Online Journal: Research to Practice. We have learned a lot while completing our research and we are looking forward to presenting our research and getting the new information and data into the public. 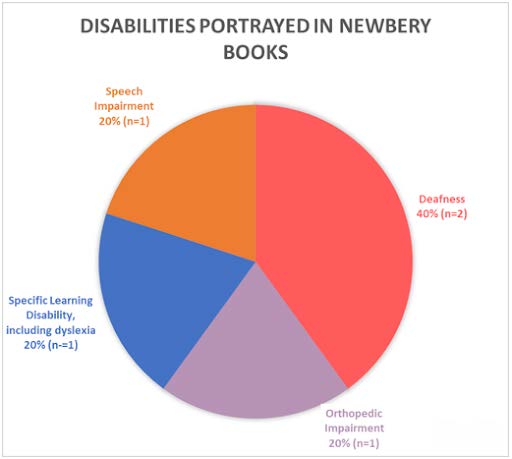 Figure 1. The Newbery books target audience is children, and in our set of books, there were a few characters that were adults. We decided to just include our children aged characters in some of our data. This graph shows the amount of characters that have the different disabilities portrayed in the different books including: Deafness, Orthopedic Impairment, Specific Learning Disability, and Speech Impairment. 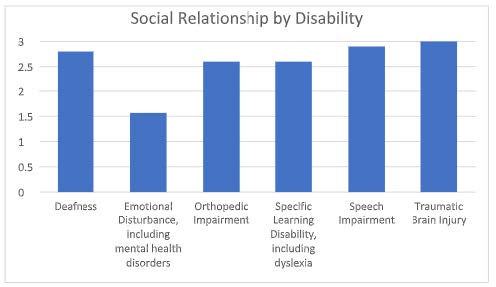