My research searched out the origins of supermassive black holes.

Figure 1 – Allowed black hole sizes, in units of solar masses M⊙. Neutron stars larger than the TOV limit collapse into black holes. Supermassive black holes were the first discovered, followed by stellar, then intermediate. No primordial black holes have been observed yet.

At the center of the Milky Way sits a supermassive black hole named Sagittarius A*1, which is over a million times the mass of our sun. Other galaxy centers host similar black holes which are up to thousands of times larger than even Sagittarius A*. Some of these giants have been sighted in the very early universe (700 million years after the Big Bang is still relatively early in the universe—it’s now been nearly 14 billion years!).

As black holes accrete, the matter pulled in towards them heats up, causing them to radiate light. This radiation can be so strong that it repulses the infalling matter, resulting in a balance between accretion rate and radiation rate called the Eddington limit. This limit then sets a bound on how massive a black hole can grow in a set amount of time.

Due to the computational complexity of doing cosmological simulations with large, highly-refined regions of space, only analytical calculations have been published thus far. Thanks to the massive computational resources at Los Alamos National Laboratory, the large-scale high-resolution computations needed to simulate their growth may be calculated. The computations seeded primordial black holes in megaparsec-sized2 boxes of space I seeded primordial black holes. In addition to their long-term growth, I also studied environmental effects on their growth, including ambient temperature, density, and sound speed.

Many researching black holes analytically use a growth rate defined first in 1952 by Sir Hermann Bondi, but this rate lags far behind observations and makes several assumptions which aren’t true for most black holes. I used a growth rate known as viscous accretion, implemented by Jackson DeBuhr in 2010.4 In median density space, black holes using viscous accretion grew thousands of times faster than those using Bondi accretion. While some use Bondi rate multiplied by 100, this is without base and fallacious. In simulations with supernovae blasts, the increased temperatures led to greater sound speeds (in the interstellar gasses), which in DeBuhr accretion led to hyper-exponential growth, while for Bondi accretion, the black hole in the SNe blast was mostly unaffected. 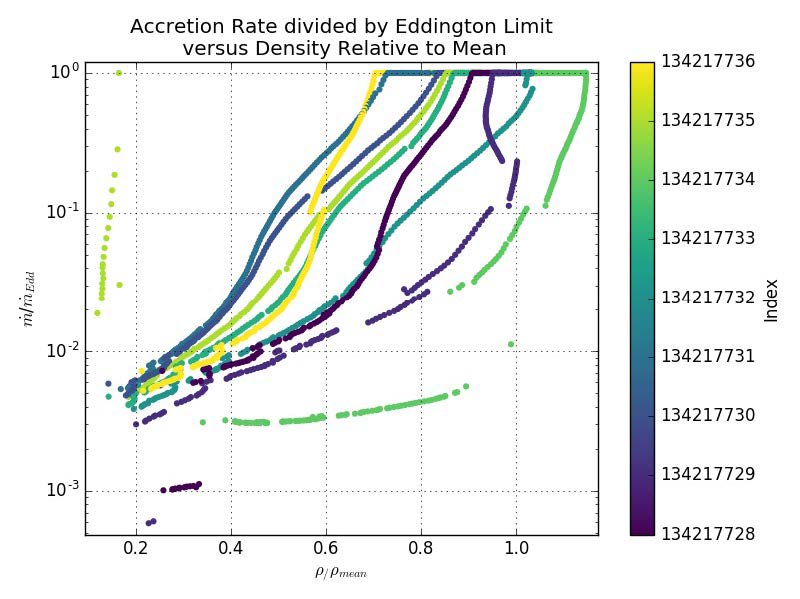 Figure 2 – Plot of PBH growth rate versus relative density of local space. The growth rate’s dependence on local relative density can be modeled to power-law equations. This will be in a future publication with Los Alamos. The PBH indexed 124217735 (lime green) has a high growth rate despite low local densities due to a supernova blast increasing local temperatures, thus increasing sound speed, which directly affects growth rates. Bondi accretion doesn’t catch this growth, and is thus an inaccurate model of black hole growth, despite its being a current standard in astronomy.

While primordial black holes may not be the progenitors of supermassive black holes, it’s still feasible. In the process of studying that, I found that a more modern accretion rate trumps the current standard in cosmology simulations. I’m very grateful for the funding I received from ORCA which funded this invaluable research experience!

2 A Mpc3 box of space is about a million times the width of our solar system (including the Oort cloud, which is a hundred thousand times further away from the Sun than Earth is). For perspective, our solar system rests in the Milky Way galaxy (0.0552 Mpc), which is in a cluster of galaxies knows as the Local Group (3.1 Mpc), which in turn resides in the supercluster Laniakea (159 Mpc).

3 According to Carr 2010, a Mpc3 box would have at most about ten primordial black holes.

4 Which goes by “Viscous Accretion,” “Alpha Disk Formalism,” or, for the programming method, by an acronym of the authors’ names, for the DeBuhr, Quataert, and Hopkins 2010 paper.