Prenatally, androgens are responsible for masculinizing the developing male fetus. Prenatal androgen exposure (PAE) also shapes male brain functioning and organization, and is the main underlying influence underlying sexually dimorphism, to a certain extent even in adulthood. Through its effect on the brain, PAE can influence personality and behavior, likely contributing to gross sex differences in these traits, as well as within-sex variation (see Manning, 2011). One of the most commonly used biomarkers used to study PAE is the second-to-fourth-finger length ratio (2D:4D ratio). In humans, males tend to have a longer ring finger and shorter pointer finger (i.e., a 2D:4D ratio < 1), whereas females tend to have a longer pointer finger and shorter ring finger (i.e., a 2D:4D ratio ≥ 1). This sex difference is likely due to a higher concentration of androgen receptors in the ring finger relative to the pointer finger (Zheng & Cohn, 2010). Consequently, when testes produce androgens and masculinize the male fetus, the androgen receptors in the ring finger induce greater growth in the ring finger of males, compared to females. Research using 2D:4D research shows that in humans, low (i.e., male-typical) 2D:4D ratio is linked with variation in a variety of personality traits, including aggression, competitiveness, and temperament traits important to social dominance (see Manning, 2011).

Monkeys’ fingers were measured while they were sedated as part of bi-annual health inspections. Following the procedures of Abbott et al., (2012) and Manning (2011), we measured monkeys’ 2nd and 4th digits along the midline of the finger, from the baseline crease of the finger most proximate to the palm to the tip of the finger. Measurements were taken at least twice, until two measurements were obtained within ±1.5 mm. The two closest measurements were used to determine average finger length. Subjects’ left- hand 2D:4D ratio and right-hand 2D:4D ratio were determined by the dividing the average length of their 2nd finger by the average length of their 4th finger. To date, we have measured more than 1,000 monkeys’ fingers, including 33 alpha and beta ranking monkeys. Although we have not finished collecting data this summer, I performed preliminary analyses on data collected thus far using SPSS V.25 (IBM). 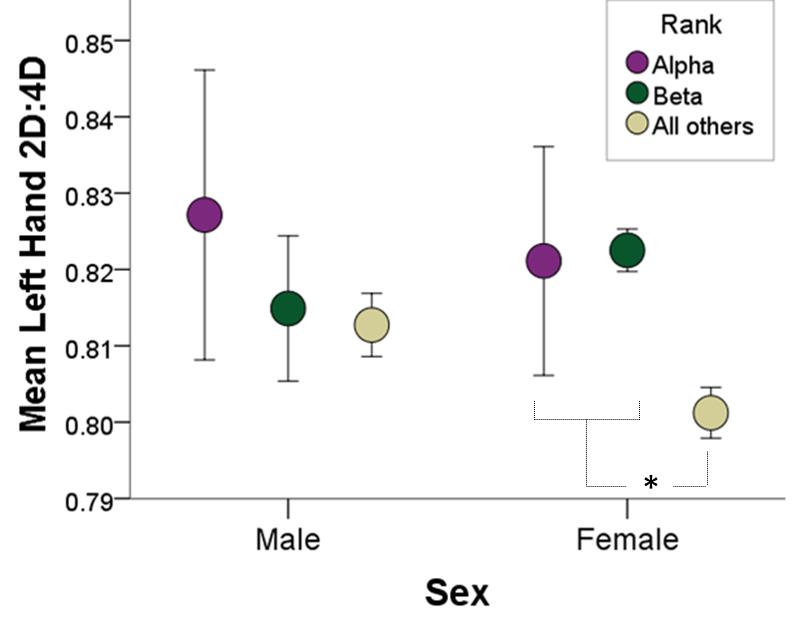 As I hypothesized, based on the data I have collected thus far, I found that the alpha- and beta-ranking females had higher (i.e., for a rhesus monkey, more male-typical) left-hand 2D:4D ratio than the other females that were not alpha- or beta-ranking. One potential explanation for this finding is that the alpha- and beta-ranking females experienced higher levels of PAE than the other females did, potentially making these females more competitive or aggressive. Through these effects on personality and temperament, PAE may have driven these females to compete for and strive to maintain higher social dominance rank than they otherwise would have with lower levels of PAE. Although this interpretation is speculative, we plan to conduct follow up observations on these subjects to explore how alpha- and beta-ranking females behave, and whether levels of PAE really made them “destined to dominate.”