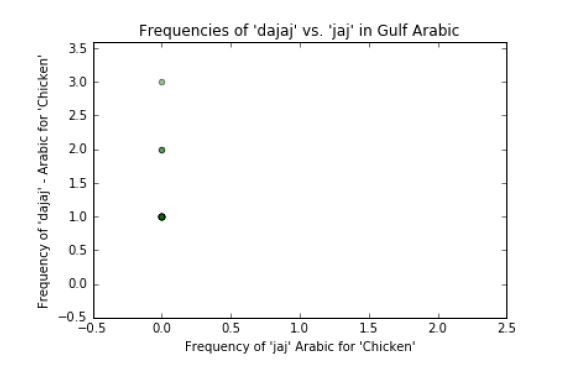 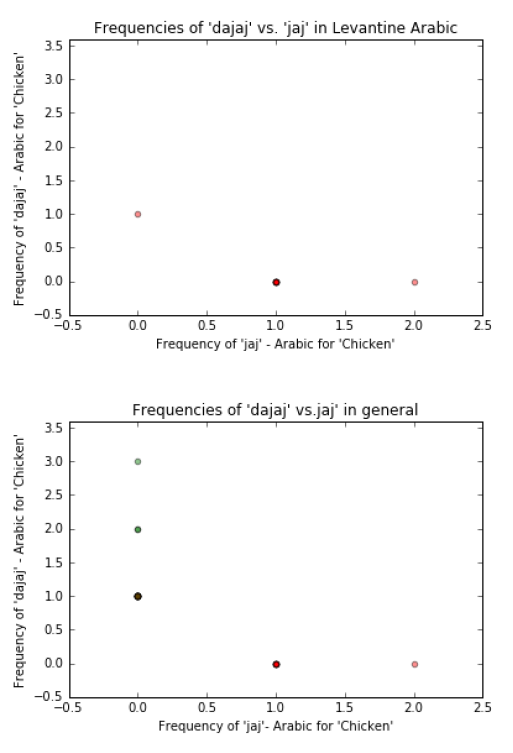 Graph حالا’ 2 ‘ vs.’ الحین ‘ (Hala vs. Al-Hain):
Al Hein is known to be uniquely Gulf and Hala is known to be more Levantine than Gulf. Our dataset and
this visualization reflects this attribute of the language. 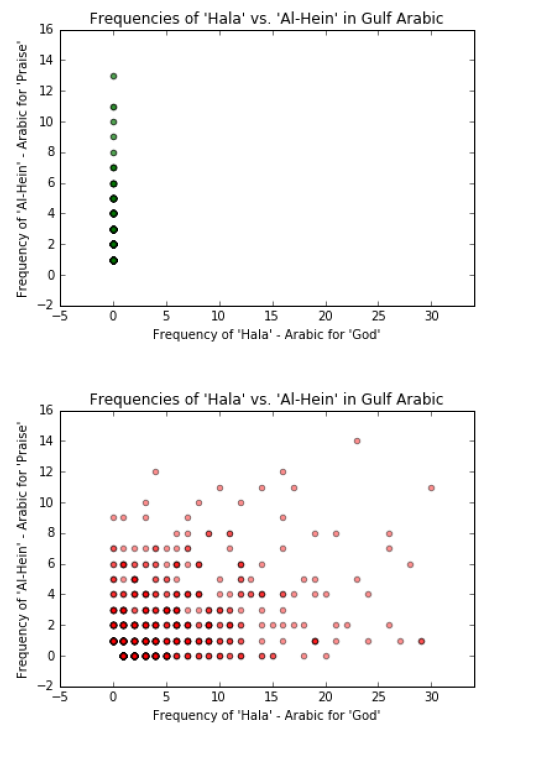 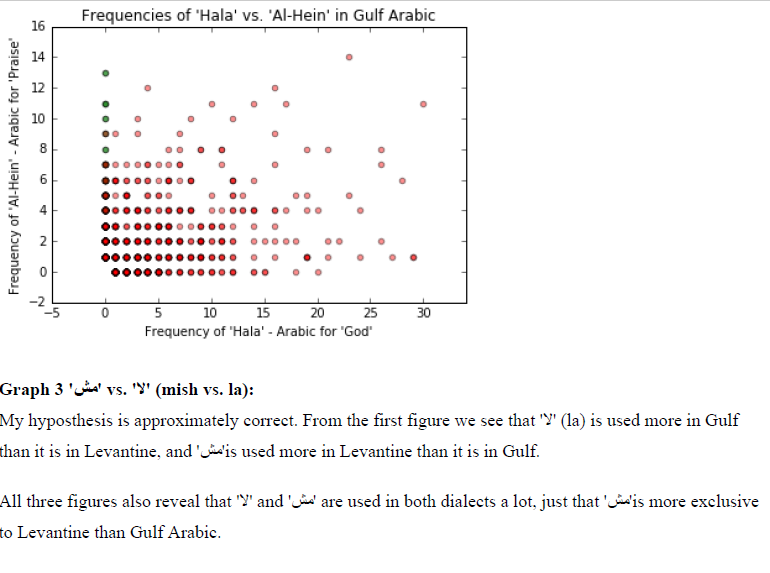 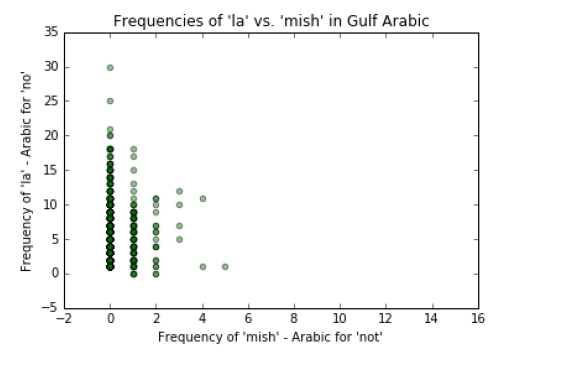 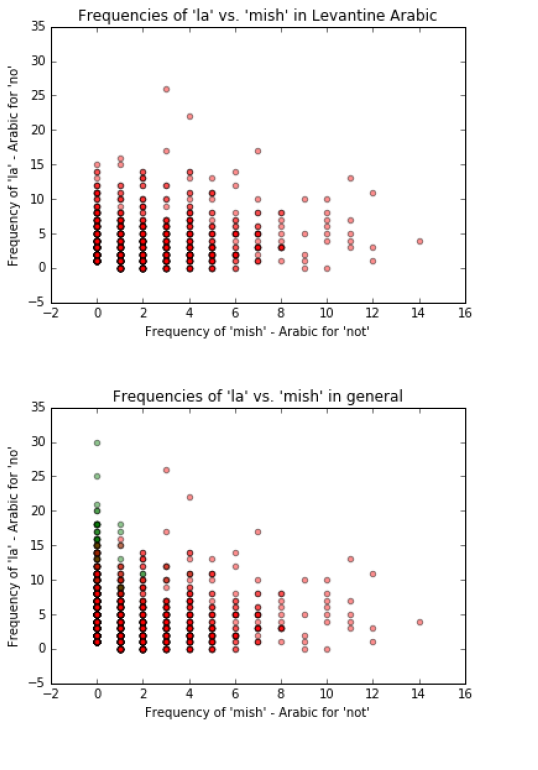 Feature Engineering
Feature engineering is the choosing of variables to consider in your statistical model. Before choosing
what features to include and what features to ignore, a list of the most common words and unique words.
The details of this are discussed in the “Data Organizing and Cleaning” section above.
By taking 40 unique words from the unique words list and the most common words of each dialect and a
few other words based on personal experience with Arabic, we end up with a feature vector with 74
unique features. Each of these features represents a word. Some words are found in both the unique
words, and common words lists.
Once the words from each conversation are counted and scaled, we end up with the feature vector.
In addition to using these two lists, a few unique words were added based on personal conversation with
native Arabic speakers. After receiving a recommendation from these native Arabic speakers and before
adding these words to the feature vector, the data visualizations were consulted to see if these words were
matches for the model.
This decision to ask native Arabic speakers about unique words in their dialect or another dialect, may
seem unscientific, however, by consulting the data visualizations, it turns out that this modeling decision
is backed by data.
Analysis/Machine Learning Algorithms
After carefully creating the feature vector with 74 different variables, 10 different machine learning
algorithms are used to analyze the feature vector. The algorithms which were tested were: trees, random
forests, an XG boosting algorithm, gradient boosting algorithms, K-nearest neighbors algorithms, Radius
Nearest Neighbors, Naive Bayes, Linear Discriminant Analysis, Quadratic Discriminant Analysis, and
Support Vector Machine. The variables for the Gradient boosting algorithms, random forests, and XG
boosting algorithms in the python scikit learn package were toggled and modified with and then the
misclassification value was averaged. The misclassification error results never varied more than 0.001 or
0.1%.
Below is a list of the algorithms and their misclassification error. For example if the misclassification
error is 0.022, then that means the algorithm misclassified the data 2.2% of the time. The higher the
misclassification error, the least accurate the result.
Conclusion
In conclusion, the model created in this project is suitable method to take into account the linguistic
characteristic of usage. As evidenced by the machine learning algorithms, for the majority of the
algorithms that were considered, there is very high amount of evidence to suggest that this model was
successful. Although the SVM Sigmoid, SVM Polynomial, SVM RBF, and Radius Nearest Neighbors,
had very unsuccessful results, because the strengths and weaknesses of different machine learning
algorithms sometimes one algorithm is good for you data while another is not.
As shown by the Data Visualizations, the data for this project is more suited for clustering algorithms like
K-Nearest Neighbors, Random Forests, and Trees.
The SVM algorithms were expected to be less successful because they work by distinguishing a line,
polynomial, or sigmoid and then determining if it is on one side of the sigmoid or not. This does not work
with the data/feature vectors in this project because that would assume that both dialects never share
words.
Since the Levantine dialect and the Gulf dialects do share words, the SVM approach fails. However, the
clustering algorithms are more suited to take into account the variations in graph 2 and graph 3.
This project was a first attempt to consider the dimension usage in an Automatic Speech Recognition
Algorithm. As this project ignores speech recognition due to the limitations of the data, future research
still needs to take this project in usage and bridge it with what has been done in ASR with phonetics. In
addition to combining ASR with the work in this project, there needs to be more research done
developing methods in classifying usage.
Bibliography:
F.S. Alfori. 2008. PhD Dissertation: Automatic Identification Of Arabic Dialects Using Hidden Markov
Models. In University of Pittsburgh.
Biadsy, Fadi, Julia Hirschberg, and Nizar Habash. “Spoken Arabic Dialect Identification Using
Phonotactic Modeling.” EACL 2009 Workshop on Computational Approaches to Semitic Languages
(2009): 53-61. Web. 12 Oct. 2016.
Thompson, Steven K., and G. A. F. Seber. Adaptive Sampling. New York: Wiley, 1996. Print.
Maamouri, Mohamed, and Hubert Jin. Arabic CTS Levantine Fisher Training Data Set 3, Speech
LDC2005S07. DVD. Philadelphia: Linguistic Data Consortium, 2005.