Introduction
Many scholars have drawn on the tools of Game Theory to explore the Humanities as a whole,
but have failed to make sense of the great contributions of Russian literature. In fact, the only
two articles dealing with Russian literary works and Game Theory were made in 1968 and 1988.
Therefore, the purpose of our project was to frame Fyodor Dostoevsky’s novel Crime and
Punishment through a reading of Game Theory. Approaching the novel in this light allowed us to
better understand Raskolnikov’s behavior and the moral implications of his actions and the novel
itself.
Methodology
Dr. Purves and I consulted many different secondary sources from the beginning of the year to
the end of the summer as part of our research for this project. Benjamin Polak’s course “Econ
159: Game Theory” for Open Yale courses and Avinash Dixit and Barry Nalebuff’s book
Thinking Strategically were particularly useful in providing knowledge about Game Theory and
how it is applied generally in the economic field and in everyday interactions. But the most
important source Dr. Purves and I consulted was Steven J. Brams book Game Theory and the
Humanities: Bridging Two Worlds, particularly his analysis of Shakespeare’s Macbeth and the
game of self-frustration.
In the summer of 2017 I studied at the Higher School of Economics in Nizhny Novgorod.
Whilst there, I visited the Pushkin House (the familiar name of the Institute of Russian literature
in Saint Petersburg). I worked with one of their employees to help further our research. We were
able to find additional sources that affirmed Dostoevsky’s knowledge and use of science and
mathematics in his works and more sources that provided insight into Raskolnikov’s behavior.
Results
After gathering and reviewing our notes on all of the research we had done, Dr. Purves and I
decided that Brams’ analysis of Macbeth was the most important and intriguing source for my
research paper because we saw similarities, but also important differences between Macbeth and
Crime and Punishment. In my research paper I explain how many readers of Dostoevsky’s novel
Crime and Punishment claim that Raskolnikov is completely insane and should therefore not be
taken seriously. Although Raskolnikov certainly suffers from moments of mental distraction at
various times throughout the novel, he, much like Shakespeare’s tragic protagonist Macbeth,
oscillates between reason and mental distraction. Framing Dostoevsky’s novel Crime and
Punishment through the lens of Game Theory helps explain these moments of oscillation and
prove that Raskolnikov (and the novel itself) is indeed much more logical than some readers may
have originally thought. And Dostoevsky’s novel is more optimistic than Shakespeare’s great
tragedy because the game between Lady Macbeth and Macbeth leads to murder, while the game
between Sonya and Raskolnikov leads to confession.
Brams’ analysis of the game between Macbeth and Lady Macbeth sheds light on
Raskolnikov and Sonya’s relationship in Crime and Punishment. Brams entitles the game
between Macbeth and Lady Macbeth “Macbeth: From Self-Frustration to Murder.” Dostoevsky’s
novel could be similarly titled “Crime and Punishment: From Self-Frustration to Confession.”
Brams explains the basic premise of the game as follows: “The game played between Lady
Macbeth and Macbeth involves her choosing to incite him to murder (I) or not incite him (I`),
and Macbeth’s killing Duncan (K) or not killing him (K`).” I argue that the game played between
Sonya and Raskolnikov involves her choosing to incite him to confess (I) or not incite him (I`),
and Raskolnikov’s confessing to the murder (C) or not confessing (C`). The different states of
the game can be explained by this table: 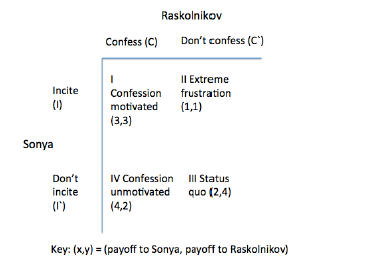 The game commences at the status quo of (2,4) when Raskolnikov comes to Sonya’s apartment
in chapter four, part four of the novel. As I go on to analyze the remaining two parts of the novel
I explain how Raskolnikov and Sonya move to stage II-extreme frustration, to stage IVconfession
unmotivated and ultimately end up in stage I-confession motivated.
I conclude my paper by explaining how framing Crime and Punishment through the lens
of Game Theory helps unravel the mystery of why Raskolnikov oscillates between moments of
great lucidity and mental distraction. Instead of acting insanely, as some readers would suggest,
he and Sonya are logically making their way to a stage of equilibrium, which is confession
motivated. Ultimately, this kind of structuralist analysis of the text shows how Raskolnikov
cannot be labeled as completely “mad” and therefore not deserving of attention. Raskolnikov is
much more complex than that.
Discussion
It was a wonderful experience to work with and talk about our project with the employee I met at
the Pushkin House. When I lived in Russia I stayed with a host family and the mother was a
professor of Russian literature at one of the universities in Nizhny Novgorod. The opinions of
these two women were particularly useful when I was drafting my research paper and deciding
where my paper could fit in the preexisting scholarly conversation on Dostoevsky and his works.
Conclusion
Dr. Purves and I intended to submit my research paper to The Troika: An Undergraduate Journal
at the University of California Berkeley, but unfortunately they are not publishing an issue of the
journal this year. Alternatively, Dr. Purves and I are planning on submitting it to The Birch: An
Undergraduate Journal of Slavic, Eastern European, and Eurasian Studies at Columbia
University instead. Dr. Purves and I believe that our project shows the merits of applying Game
Theory to Russian literature. Game Theory gave us the tools to better understand Raskolnikov’s
behavior and the moral implications of his actions and the novel itself. Dr. Purves and I plan to
continue in this vein of research in order to help bridge the gap between Game Theory and
Russian literature.