In this project, we set out to observe several Cepheids to look for changes in their period. Several years ago, the period of X Cyg, a Cepheid, underwent a shift, and that shift in period was accompanied by a temperature drop. Our hopes in this project were to detect any shifts in period, and to see if we could better understand the correlation between period and temperature.

Cepheids have particularly long periods, taking anywhere from a few days to several weeks to complete their cycle. As such, they only require one or two observations each night to establish a good light curve. So, over the course of one night, many different Cepheids can be observed by a single telescope. Manually moving and centering a telescope on each of these objects for only one or two observations would prove cumbersome and tedious, and it would limit the amount of data we would be able to retrieve in a given night. To overcome this hurdle, we decided to set up a robotic system that would automatically locate a given star in the night sky, take the necessary observations for that object, and then move on to the next object. Having a robotic system would maximize the number of targets we would be able to observe each night and relieve some of the burden of manual observing.

A robotic telescope system requires hardware to run the telescope and software to control it. BYU already had several smaller telescopes that were not in use. Small telescopes collect less light than larger ones, meaning our ability to observe dim objects would be limited. However, because they collect less light, they make it much easier to observe bright objects that saturate the photoreceptors of larger telescopes. We decided to limit ourselves to these brighter objects and use one of the small telescopes already in BYU’s possession, with a diameter of 200 mm. We then purchased a CCD camera, a filter wheel, and a telescope mount that can be remotely controlled. In terms of software, we use a program to control the mount, a program to control the CCD, and another program to automate the two. In the end, the system used: a 200mm Vixen VMC200L Optical Tube, a Finger Lakes MicroLine CCD with a 0.72 arcsec/pixel plate scale, and a Paramount MYT telescope mount, running TheSkyX for mount control, MaxIm DL 6 for CCD control, and CCD AutoPilot 5 for system automation and session planning. 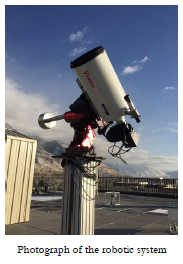 We put together a list of about 30 cepheids within the right brightness parameters and at a good location in the sky, and began testing out the system in June-July 2017. By August, we had begun taking data on our targets in earnest. Data have been collected since then, usually two or three times each week. Three filters have been used—the V filter, and a wide and a narrow H-α filter. Due to the scarcity of our data points, however, our light curves are not yet complete enough to warrant proper scientific analysis. However, preliminary results do look promising, proving the reliability of the system and the data it produces. For some objects, data points have been well distributed along the object’s phase (see Fig. 1); for others, more images are clearly needed (see Fig. 2).

The proposal for this ORCA Grant was centered on the establishment of a robotic system for Cepheid/δ-Scuti photometry. While the scientific use of the system is still ongoing, the system itself has been established. We are able to use it to collect data, and that data matches what we expect to see. It is my hope that this system will be used by students and faculty for years to come, especially once it can be expanded to include more telescopes. 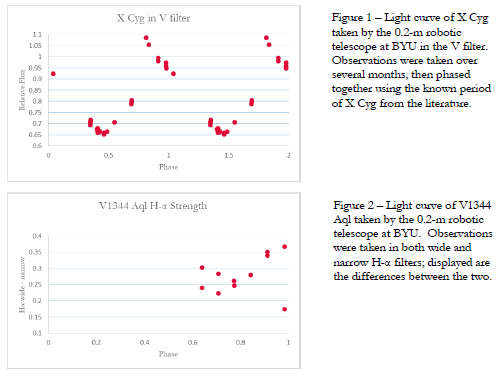