The purpose of the given document is to remind the reader of goals initially set in conjunction with the ORCA Grant project proposal in October 2016, to present experimental findings obtained during the grant period, and to discuss the results of the work and their implications for future investigations. 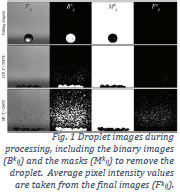 As stated in the proposal, the main purpose of this ORCA project was to compare the droplet atomization (expulsion of a fine spray) of various water-glycerol mixtures upon impact on superheated, superhydrophobic surfaces. The major goal to that end was to use a certain unique experimental procedure in quantifying the data obtained. This methodology involves capturing droplet impact of glycerol solutions onto a hot superhydrophobic wafer using high-speed digital imaging and then using computer vision algorithms to process each frame (see Figure 1) and quantify the intensity of secondary atomization as a function of time and temperature. The final goals stated in the project proposal were for the research to result in a publication in a certain international journal and a poster at the APS Division of Fluid Dynamics International Conference this past November. As of December 2017, I am preparing my body of material for submission to the journal. However, I did not attend the APS conference, having moved to Russia in August upon acceptance into the 2017-2018 school year of the Math in Moscow program. Academic outcomes aside, the laboratory work itself brought a measure of success and scientific insight.

Three solutions were prepared with fixed glycerol percentages by weight. Preliminary data was gathered related to the physical properties of each glycerol mixture. Average density, viscosity, surface tension and droplet diameter were used to calculate the Weber and Reynolds numbers for convenient comparison, in keeping with common practice. Droplet diameter and surface tension did not change significantly with an increased glycerol content, leaving density and viscosity as top candidates in governing Weber and Reynolds numbers. At first glance, viscosity seems the most likely; raising glycerol content to 40% and 60% increased viscosity by factors of about 2 and 3 while decreasing Reynolds number by factors of about 2 and 3, respectively. The increase in Weber number appears to be much closer to linear with the linear increase in percentage of glycerol. The document found at the following link provided some reference with respect to the physical parameters involved: http://www.aciscience.org/docs/physical_properties_of_glycerine_and_its_solutions.pdf. 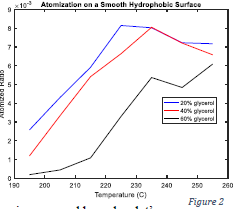 Before testing impingement on the superhydrophobic wafers, I used a smooth hydrophobic (but not superhydrophobic) surface to give a baseline comparison and obtain a normalization constant. Figure 2 shows atomization across a range of temperatures the three glycerol solutions. The peak of the atomization curve of each glycerol solution became the normalization constant for its respective solution. In other words, atomization on the superhydrophobic wafers was normalized by the maximum atomization ratio achieved for each glycerol solution on the smooth hydrophobic surface. From Figure 2 it is clear that greater concentrations of glycerol suppressed atomization on the smooth wafer. This contradicts the hypothesis I stated in the proposal- I expected to find that higher concentrations of glycerol in a droplet result in higher atomization volume. I also hypothesized that atomization volume is governed by a droplet’s surface tension, though density could turn out to be dominant. However, given the dramatic changes in viscosity upon adding glycerol, it seems most likely that viscosity is the main player- a more viscous liquid will atomize less. Furthermore, whereas the atomization curves for the 20% and 40% glycerol solutions are well-behaved, meaning unimodal with a clear maximum attained within the established temperature range, the 60% glycerol solution appeared to be more erratic. Atomization tends to decrease with temperatures hotter than 225-235 degrees centigrade because a layer of vapor forms between the impacting droplet and the superheated substrate (known as the Leyden-Frost Effect) which allows nucleated vapor bubbles to escape the drop through the bottom. But a 60% glycerol drop may be viscous enough to resist the formation of this vapor layer or somehow delay its effect until much hotter temperatures. However, more data needs to be taken to indicate the repeatability (or otherwise) of this outcome. Finally, Figure 3 reveals a twist in expectations. For greater concentrations of glycerol, a greater normalized atomization ratio was observed, consistent with the original hypothesis. It is clear that even the 8-pitch surface drastically calmed violent boiling from the smooth hydrophobic surface to 45% of the atomization of the 60% solution to almost 1/5 of the atomization of the 20% solution. The 12- and 16-pitch surfaces reduced atomization even more, allowing as little as 15 or even 10 percent of the maximum achieved on the smooth hydrophobic surface. But the fact that, on the superhydrophobic surfaces, atomization generally increased by the addition of glycerol, is intriguing. 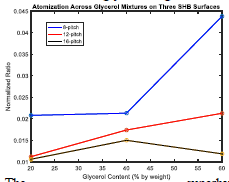 The superhydrophobic surfaces were tested at 200C, rather cooler that the temperature of maximum atomization on a smooth surface, and it is possible that the increased viscosity of the solutions interfered with the liquid-solid contact boundary of the roughened superhydrophobic substrate, prolonging direct contact and increasing spray. As with all experimentation, more testing will yield more data with additional insights about the curious phenomena on these small space and time scales.